Researchers are well on their way to developing new cultivars that have the genetics to utilize nitrogen (N) more efficiently. For farmers, that means lower input costs, and for the environment, it could lower N loss through leaching or nitrous oxide gaseous emissions.

“We are trying to push these materials through the breeding process as fast as possible, and I hope that one or more of these lines may be released for commercial cultivation in 2018,” says Yadeta Kabeta, a research scientist with Alberta Agriculture and Rural Development (ARD) at the Field Crop Development Centre (FCDC) at Lacombe, Alta. “In 2012, these materials showed up to 11 per cent superiority in nitrogen use efficiency (NUE) over our standard check cultivar Vivar.”

Kabeta’s long road to developing a better barley with improved nitrogen use efficiency (NUE) started with looking at 10 years of yield trial data from central Alberta. Additionally in 2007, 25 genotypes were grown at six environments for analysis of the pattern of genotypic variation for NUE.

“When we started the NUE work, we were lacking baseline information needed for breeding. Therefore, our initial focus was to try to establish that baseline to understand the genetics of NUE and genetic variability for this trait,” explains Kabeta, who has been working with ARD barley breeder Pat Juskiw.

Based on the analysis, the researchers found there was significant genetic variability among barley germplasm for NUE, and that traditional breeding methods were effective for improving barley yield in low N environments. In the trials, Vivar and Xena were superior in NUE. Vivar is a six-row, rough-awned, high-yielding semi-dwarf feed barley developed at the FCDC at Lacombe. Xena is a two-row feed barley that is the standard in high-yielding feed barley for Western Canada.

Breeding an improved NUE barley
With proof that NUE in barley had genetic variability, Kabeta set out to find better germplasm than Vivar and Xena. During 2009, the researchers screened over 700 germplasm lines assembled from the FCDC breeding program at Lacombe, and additional lines from the University of Minnesota, the University of Adelaide, Australia, and international research centres ICARDA and CIMMYT. Out of these and subsequent evaluations, three additional lines were identified as highly N efficient. While the germplasm were only as good as Vivar for NUE, they had complementary N efficiency attributes and could be selected for within the breeding program.

Using these three lines, six crosses were made and advanced to a stage where lines from the crosses could be evaluated for yield and NUE. The preliminary results in 2012 showed that the best lines had up to nine per cent higher grain yield than the best check cultivar Vivar. These lines are in their second year of field-testing at four sites in Alberta in 2013, and are the ones that Kabeta hopes to have registered within five years.

Not satisfied with the scope of the germplasm screening, Kabeta reached further afield to semi-arid areas of the world. In 2011, 84 elite germplasm lines from across Asia, Africa and South America were evaluated under field conditions. From these, the best line was selected and tested under field conditions in 2012. One selected line had a 10 per cent higher mean grain yield and recovered 22 per cent more N in the grain than the best check cultivar Vivar.

“Our hypothesis was that these germplasm may have developed different forms of adaptation to low N growing conditions in their native environment,” explains Kabeta.

New research is going to use a complex crossing scheme to combine the best line from the first round, the best line from the second round, Vivar and Breton, a recently released cultivar from the FCDC. “The goal is to pyramid the different NUE genes and develop a cultivar that is superior in N efficiency and also meets other requirements of feed quality, resistance to diseases and, of course, grain yield,” explains Kabeta.

Kabeta’s research group is also working to develop molecular markers for NUE. The researchers plan on tagging the NUE genes so they can implement marker-assisted selection for NUE in their breeding program. In past years, the Alberta Crop Industry Development Fund (ACIDF) funded the program. For this next round of funding running from 2013 to 2016, ACIDF, Alberta Innovates-Bio Solutions and Alberta Barley Commission are co-funders. This funding will cover the marker development work, develop lines from the second round of crossing, as well as carry out genetic and physiological characterization of the efficient lines.

Research on genetics of NUE isn’t new. In 1995 at the University of Alberta, Allen Good discovered a NUE gene. He is working to genetically engineer barley that overexpresses an enzyme alanine aminotransferase (AlaAT). This enzyme is important in N metabolism and an overexpression of AlaAT has been shown to improved biomass and other NUE attributes in canola and rice.

“Looking at the pedigree and performance of Vivar, it seems that Vivar has inherited this gene. Our molecular group is going to confirm this hypothesis as part of our new funding,” says Kabeta.

While new NUE barley lines may still be five years out, when they do become commercially available, that will be good news for farmers and the environment. In Canada, fertilizer use has risen from 200,000 tonnes in 1960 to 1.8 million tonnes today. Farmers will welcome anything that can be done to cut those input costs. 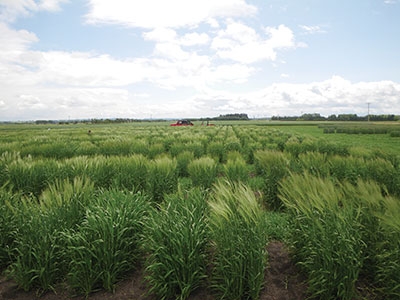 The 2009 germplasm evaluation plots. Researchers are well on their way to developing new cultivars that have the genetics to utilize nitrogen (N) more efficiently.