Features Bioenergy Biomass
Possible uses of biochar are many

The Alberta Biochar program is a recent addition to the work undertaken by Alberta Innovates Technology Futures (AITF) through a partnership with Lakeland College.

“We have a saying that not all biochars are created equal,” says Anthony Anyia, lead scientist and manager, Bioresource Technologies with AITF. “Depending on what you want to use biochar for, the feedstock you are using for the biochar may have some other components that may not necessarily be good for the application you are looking at.”

Biochar is the material created when biomass is combusted under low oxygen conditions, a process known as pyrolysis. It is a green platform technology with the potential to improve soil and reduce greenhouse gases.

Alberta has yet to carry out any large-scale biochar studies, says Anyia, which limits the information available on biochar. Studies underway right now are examining biochar production, standards, quality and different end-use applications.

Anyia is hoping that recent funding from Western Economic Diversification Canada, a number of provincial sources as well as industry partners will help provide answers.

Biochar can be made from a variety of materials, pulling on what is available in the area. A forest company could use wood and forest residue or pulp mill waste to make biochar, while a crop producer could use wheat or barley straw or residues from other crops.

Biochar could be an important ally in fighting greenhouse gas emissions. While all biomass eventually breaks down, releasing carbon back into the atmosphere, if biomass is used in making biochar, biochar stabilizes that biomass, cutting in half the carbon that will eventually be released and allows the carbon to remain sequestered for longer periods. Unlike biofuel that is carbon neutral, biochar is carbon negative and can potentially reduce methane and nitrous oxide emissions from soil.

AITF is working with partners, who are using biochar as a horticulture growth media for vegetable crops in greenhouses. Early indications show the same or higher yields achieved and the alleviation of herbicide toxicity. The demonstration phase is presently occurring in Brooks, Alberta, where Alberta Agriculture and Rural Development (AARD) has teamed up with a local commercial greenhouse facility and greenhouse growers. Work is also being carried out in British Columbia with a greenhouse company. That project is moving toward commercialization, says Anyia.

Bonnie Drozdowski is the program leader for the reclamation group at AITF. Her work is with biochar as a soil amendment, which falls into two categories: land reclamation and marginal soil amelioration.

Drozdowski stresses that the plots used were small and that the focus was not on the mechanisms or the processes occurring within the soil, but to demonstrate crop response to biochar application into the Bnt horizon of solonetzic soils. The use of biochar was compared to a control treatment and to deep-trenching, and has resulted in improved productivity in the biochar treatments.

“We’re really quite positive that these results give us inclination to continue a further scaled-up research program in respect to enhancing marginal solonetzic soils,” says Drozdowski. She notes the trials did not take into consideration operational values; and while the operational costs for using biochar would be the same as deep-trenching, there would be the additional cost of purchasing biochar.

However, there would be long-term benefits in using biochar, which would include improving water and nutrient dynamics. “This is speculative because we haven’t done the actual science to prove out what is actually happening, but we believe it is occurring,” cautions Drozdowski.

Reclamation and remediation
Land reclamation requirements in the 1980s and early ’90s were not as stringent as they are now and many abandoned oil and gas sites were left in poor condition. “So now when we’re going back to do the reclamation, it’s quite challenging to get the same level of productivity on the sites or even the same capability, which is how reclamation in the province is governed,” says Drozdowski.

Coupled with that is the directive to not introduce new plant species or sources of weeds to the reclaimed sites. “Because biochar is an inert substance in nature but still has beneficial soil properties, it can enhance the productivity of soil without the subsequent issues that might be associated with a typical amendment application,” says Drozdowski.

Trials for this use of biochar will get underway in 2013 with two wellsites located in the Peace Region. AITF will be partnering with novaNAIT’s Northern Boreal Research Institute in Peace River where biochar and mechanical pulp sludge will be evaluated against a control on two different soil types. And, work is being undertaken with a partner to determine if biochar can be used as a filtration media for processing affected water.

Also, because biochar is a fine material that faces up to a 30 per cent loss when applied on an operational large scale, which limits its applications, research is underway to determine if it is feasible to create a higher value biochar product that is easier for large-scale applications. 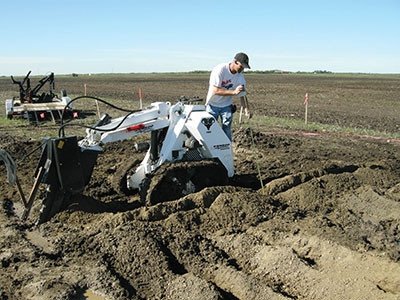 Small equipment is utilized for deep-trenching in the solonetzic biochar trial. The Alberta Biochar program is a recent addition to the work undertaken by Alberta Innovates Technology Futures through a partnership with Lakeland College.