An empty field after the winter cereal harvest can be a terrible thing to waste.

With earlier harvests taking place in Ontario in recent years, some farmers have been putting those fields to good use by planting a double crop of soybeans in early July.

“Our growers are always looking at ways that they can generate extra revenue,” says Eric Richter, an agronomic sales rep at Syngenta, and a longtime proponent of double crop soybeans.

“To see a field harvested in early July and lay idle for the rest of the season just baffles me. There is an opportunity to plant a crop and generate some additional income.”

Given that planting in July is a risky proposition, research into management practices for double cropping soybeans has been limited. That scenario is starting to change as Richter and the Ontario Ministry of Agriculture and Food (OMAF), as well as the University of Guelph, work on separate projects.

While it is still early, particularly for the OMAF and Guelph trials that started in 2012, the research suggests that higher seed populations and the use of short-season varieties are key factors in helping the late-planted beans reach maturity.

However, much still depends on the time of planting and the weather conditions.

“When you’re seeding, it is often quite dry, so establishment is the first problem,” says Horst Bohner, OMAF soybean specialist.

“The second problem is fall frost. Can you get them finished before it freezes? It’s a high-risk scenario and that’s why you can’t get crop insurance for it. It’s also why we don’t, as a general recommendation, just say, ‘go out and do it.’ ”

With the ability to plant in a more timely fashion in recent years, growers of double-crop soybeans have been tweaking their management practices. OMAF tested these ideas in its research to determine optimum seeding rates (100,000, 200,000 and 300,000 seeds per acre) and to test the appropriate
maturity (variety) to seed. In 2012, trials were planted at three locations: two in Perth County, Ont., near Mitchell, and one in Middlesex County, Ont., near Lucan.

One site in Perth, near Bornholm, was planted after winter barley on July 11.

The other two sites were planted on July 23 and 24 after winter wheat. There was a slight delay at the two later planted sites because of the need to remove straw. As a result, only the early-planted Bornholm site made it to yield and was harvested November 23. The other two sites did not yield enough to warrant combining due to an early October frost.

The U of Guelph also established one trial at the Ridgetown Research Station, which yielded about 35 bu/ac.

At the Perth site that was harvested, two varieties were planted. One had a CHU rating of 2,650, which was about 100 CHU shorter than an adapted variety for the planting area.

There was little yield difference between the two varieties. “What we’re seeing so far from our research is that increasing the seeding rate helps a number of things including the most important, which is yield,” says Bohner. He suggests seeding 250,000 in narrow rows but he cautions that it could get costly given a mediocre chance at success.

“Location is another key factor in trying to make it work,” adds Bohner.

Richter says the 250,000 to 300,000 seeding rate is important for getting as much canopy closure as quickly as possible.

“That canopy closure is very critical because we really only have 90 days to a maximum 100-day growing season in Ontario,” says Richter, noting that 50 per cent of the heat units and 45 per cent of the sunlight, on average, is available between July 15 and the first “true” killing frost.

Creating competition is another key factor of increasing the seeding rates.

It’s one of the reasons Ian Matheson, who farms near Woodstock, Ont., plants 300,000 seeds per acre.
Matheson is one of several growers who have worked with Richter on his project.

“From what we have learned, that is definitely necessary to get the height and get the competition in there to make those beans elongate up,” says Matheson, who plants soybeans after winter barley.
As for finding the appropriate maturity for double-crop beans, it was thought that full-season varieties were required to provide the additional height at harvest.

Brent Pilkington, who plants double-crop soybeans after the pea harvest on his farm near Mount Brydges, Ont., says the longer-season theory seemed to have merit.

“The longer-season will get more growth on them but you usually end up with junk beans if they don’t make the frost date,” says Pilkington. “With the earlier ones, if you bump up the population, you still get some height and the plant just physically matures.”

While cautioning that he has only one year of data, Richter says “downshifting” maturity is critical to improving the overall double-crop soybean system.

He suggests moving down by about 200-300 heat units from what would be considered a full season bean.

“The double-crop system really only works in the areas that have about 2,900 to 3,000-heat unit seasonal rating and more,” says Richter.“The longer-season variety is not actually helping the growers who are doing double crop; it puts them at higher risk of the system not working.”

Matheson, who opts for a more conservative approach of dialling back by 50 to 100 units, agrees that last year was tough on the longer-season varieties. “On some of the longest day beans, it was an ugly sample of beans: a lot of black beans and rotten beans because they got frosted and they were nowhere near ripe,” recalls Matheson.

While determining the best seeding rates and varieties is helping to improve the double-crop system, the most critical factor continues to be timing.

It’s imperative to plant the crop as quickly as possible after the cereal harvest.

“Literally the minute that the combine is through, and if you’re baling straw, get it baled and plant the beans or chop the straw, spread it wide and get the beans planted right away,” says Richter.

He has always believed that double cropping is a real “crap shoot” after July 15, noting the odds against it working increase significantly each day after that date.

By the 20th, Richter says, it likely won’t work.

“We run out of physical days, heat units and sunshine. But between July 1 and 15 in most years in those 3,000-heat unit areas, we have half a season left and there is an opportunity for double crops to work really well,” he adds.

Whereas Bohner remains cautious over the high-risk prospect of double-crop soybeans, he says it can be worth a try in the right year.

“There have been guys who have yielded over 40 bushels and it’s hard to argue with that,” says Bohner.

“Plant as early as you can and choose the best variety possible that’s shorter than your adapted variety, and keep your fingers crossed.”

In Ian Matheson’s case, his advice for those considering the idea is to keep the expectations low.

“Don’t count on harvesting them; hope to harvest them,” notes Matheson. “Look at the money people are spending on cover crops. Beans are a little bit more expensive to plant but you have a chance to harvest a fairly valuable crop. 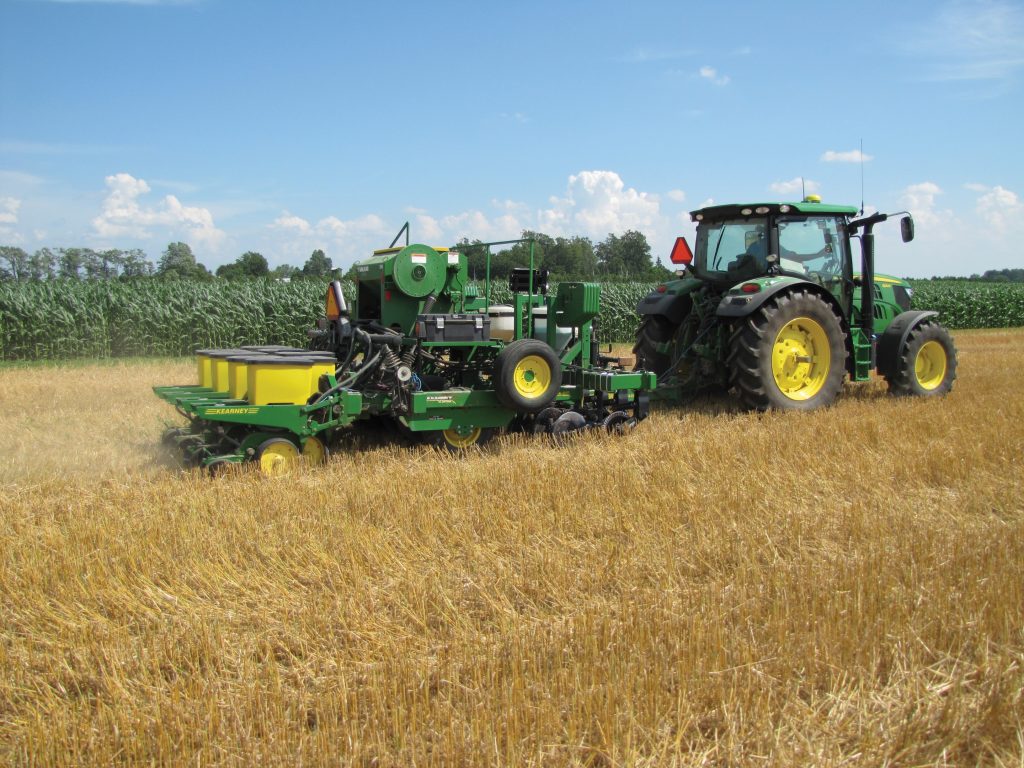 Soybeans are planted into wheat stubble immediately after harvest on July 18 An empty field after the winter cereal harvest can be a terrible thing to waste.