Modern crop production has a lesson or two to learn from the ancient Amazonians, including the benefits of using biochar to enrich infertile agricultural soils. 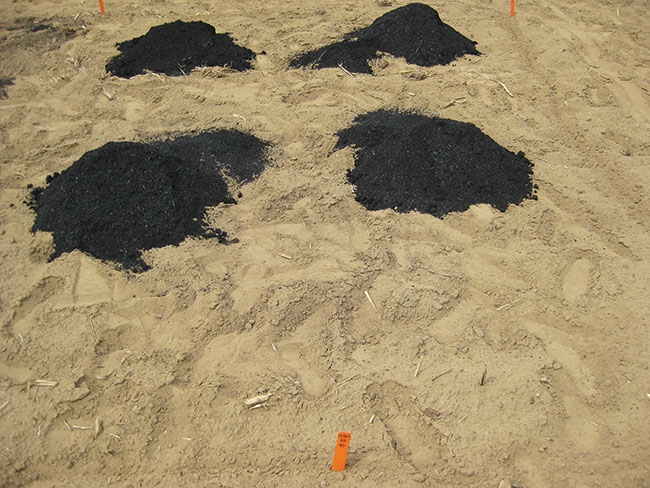 Biochar ready for incorporation into test plots in Rachel Backer's McGill University trial. Modern crop production has a lesson or two to learn from the ancient Amazonians

Biochar, defined as charcoal produced from organic material, is used as a soil amendment to improve carbon capture and nutrient availability. It has been widely studied in tropical environments, but recently, it has also generated some research interest in the northern hemisphere.

According to Maren Oelbermann, an associate professor at the University of Waterloo’s School of Environment, Resources and Sustainability, biochar is “a very ancient product,” used for thousands of years to improve crop production in the Brazilian Amazon. Sites in the Amazon still boast areas of black soils, which contain charcoal, mixed with the regional red soils. These black soils are referred to as “terra preta” and are extremely productive.

“Tropical soils are, by nature, acidic and nutrient-poor. By adding charcoal, you increase the pH and this increases microbial activity and enhances the availability of these nutrients for uptake by plants,” Oelbermann says.

In 2016, Oelbermann received $173,000 in funding from the Ontario Ministry of Agriculture, Food and Rural Affairs (OMAFRA) to study the effects of biochar in temperate soils. The study, which began last year, will run for three years on six hectares of farmland in Huron County, making it the largest replicated biochar trial in Ontario.

Oelbermann has been working on biochar for a few years. In 2014 she co-authored a study with a graduate student, Matthew Dil, looking at the impacts of biochar pre-conditioned with urea ammonium nitrate (UAN) on maize in a potted greenhouse.

“We saw differences in soil chemistry and soil biomass,”

Variables
Complicating biochar research around the world is the fact that not all biochars are created equal. Depending on the material used to create the biochar and the temperature it’s heated to, the end results can be radically different.

“When you make biochar you can start off with many different starting materials – biosolids or food waste, for example – and then you heat it to different temperatures,” says Rachel Backer, a PhD student at McGill University.

Biochars cooked at lower temperatures contain carbon sources that can be recycled by soil bacteria. When biochars are cooked at higher temperatures, “the carbon condenses, and that’s good for carbon sequestration because it can’t be used by bacteria in the soil,” Backer explains.

In addition, the effect of biochar depends on soil type – not all benefit.

In spring 2016, Backer published research results from a three-year field study in which pine wood biochar was added to two soil types (sandy and sandy clay loam) in Quebec to analyze the effects on nutrient availability, soil organic carbon (SOC) and yield in corn, soybean and switchgrass. Backer’s team concluded yields increased 14 per cent in corn when soils were treated with biochar, while SOC increased in switchgrass and corn plots.

“What I think is going on with the corn on the sandy soil is that that soil doesn’t retain as much fertilizer compared to the loamy soil, and that’s related to the soil chemistry. I think the biochar acts almost as a trap for the fertilizer,” she says.

Backer is currently following up on the field study with greenhouse work analyzing how biochar interacts with N fertilizer. “It seems like it does increase fertilizer retention,” she says. “It increases cation capacity in the soil and it changes the way the roots grow in the soil. This means the plants are searching more for nutrients, which suggests that in the event of a drought, the plants already have a larger root system, allowing them to access water.”

Applications
Whether biochar will become the poster child for improving taxed soils in temperate climates is not yet clear. Backer and Oelbermann agree more research needs to be done before producers jump on the bandwagon. But Oelbermann says it never hurts to have an open mind and try biochar on a small area. In the future, biochar could present an opportunity for producers to earn tax credits for improved carbon sequestration.

“But increased SOC doesn’t always translate to enhanced soil fertility. Part of the problem is that the only way to find out is to do replicated longer-term trials. I’m grateful OMAFRA has provided this chance and hopefully we can continue this research,” Oelbermann says.

Backer notes a few biochar products have been registered for use in Canada, and producers interested in experimenting with biochar as a means of reducing fertilizer requirements should stick to registered products.

But the usefulness of biochar will also depend on why the soil isn’t productive in the first place. “If you look at the one soil in the study, the pH of the sandy clay loam soil was really low and the biochar we used didn’t increase the pH all that much, so it didn’t fix the problem. We would have been better off adding lime,” Backer says. “But if you have a sandy soil and you put nutrients on and they’re just disappearing, biochar might have a role to play.”

Backer also cautions producers to test biochar in a small area before applying it everywhere. “My first experiment was in the greenhouse and our first application killed all the corn seeds. Don’t repeat my mistake,” she says. “CFIA has guidelines for biochars under the Fertilizer Act. Buy something certified.”

Biochar can be applied in much the same way as manure and in roughly the same quantities. In Backer’s study, the team applied 10 to 20 tonnes per hectare, discing the material in to incorporate it into the top 10 inches of the field.