Many Manitoba farmers struggle yearly with wet, compacted soils and high residue situations. Crop producer Greg Smith is no different: his farm is situated in an area with very heavy clay soil that, when wet, compacts quite a bit, causing water infiltration and root growth issues.

The Smiths’ forage seed production is under contract and, typically, the length of the contract for seed varieties is three to five years. These are generally the most productive years, and if left longer, weeds become more of an issue. Smith says many of the forages tend to produce a wonderful crop the first year, a good crop the second year, but by the third year the yield drops off dramatically.

“The timothy yields fall off less than some of the other grasses,” he says. “Meadow fescue can produce a wonderful crop the first year. The second year is okay, and then it really takes a nosedive.”

Smith felt the drop in productivity might be because of his heavy clay soil. As a result, several years ago, he decided to change up his tillage system. “We decided to try tillage to rejuvenate these fields with a deep tiller that has a narrow point,” he says. “But as soon as we’d get in there, we’d start creating a field that was extremely rough with sods. We did see a slight improvement, but not anything to write home about.”

So two years ago this fall, Smith tried using a demo vertical tillage unit in the forage fields. “I went into portions of a grass field and ran around some drains [shallow ditches] that were extremely rough with ruts from the sprayer going up and down to see what would happen to the field,” explains Smith. The next year, the timothy and orchardgrass crops showed great improvement.

In spring 2012, Smith purchased a Salford 41 foot Independent 2100 vertical tillage unit. “I went out that spring and did some more passes – going up and down the field on an angle, doing part of the field and then leaving the rest,” he says. “Come harvest, in the orchardgrass field, you could see where I went up and down the drains and where I worked the one side of the field the previous fall. The crop actually produced more heads; you could see a big difference. At that point, we figured we were on to something.

“Now, we’ve gone in and harvested the crop and worked our fields in the fall after harvest – going in and working it twice with the vertical tillage unit.”

Smith admits to being new to the many benefits of using a vertical tillage unit, but is so far very impressed with the results. “I have a meadow fescue going into its third year of production and we have gone through it twice with the vertical tillage after harvest,” he says.

Most of Smith’s forage grasses are harvested relatively early – anywhere from the end of July to the end of August – and this is followed by chopping and spreading the crop residue. After about a week, when things become dry, Smith goes back in to do another pass with the vertical tillage unit. To date, he hasn’t seen any crop damage or other negative impact from vertical tillage on the grasses when it comes to over-wintering – only improvements.

Although still on a learning curve, Smith says some of the benefits of using the vertical tillage unit he has seen so far include getting more water infiltration into the soil by opening up the soil. “We’re also getting rid of some of the sod-bound conditions, possibly forcing the plants to grow some new roots.”

The biggest production issue Smith has experienced over the last two years is having very dry weather, which affects his yields. But overall, Smith says, “We think we’re on to something here, and I’d like to see other people try it too and confirm what we’re getting out of it.

“This machine works well without making a mess on the field. It’s also something we can use elsewhere on the farm with our regular cropping practices.”

Smith uses the vertical tillage unit in several of his other fields to break out the sod, effectively getting the field back into what Smith calls “a conventional cropping system.”

“It does a nice job of finishing the field off for next spring for seeding, making a really nice seed bed,” he notes. “We’ve switched to a disc drill seeding unit which doesn’t move any dirt, as we’ve found it to be very important to have a properly prepared seed bed. The vertical tillage unit works well in this area.”

Smith uses vertical tillage in his alfalfa fields in spring as well, which he says has helped in managing the previous year’s residue and in smoothing out the soil. “We’ve never baled the alfalfa,” he notes. “We chop and spread it, working it in with the tillage for residue management in the spring.

“In the grass fields, it gets rid of the trash well enough for us that we no longer need to bale any of the grass seed fields. So we’re not losing nutrients from our straw. Not baling also reduces compaction.”

Smith hopes that, by using the vertical tillage unit to maintain his forage fields, he will get three or four years of consistent production. “At this point, the stands look good. Time will tell how we do from here.” 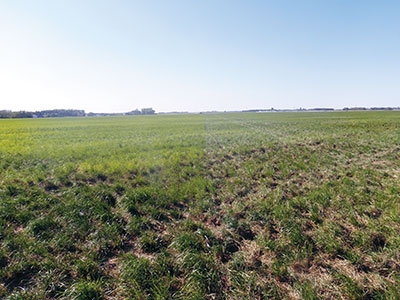