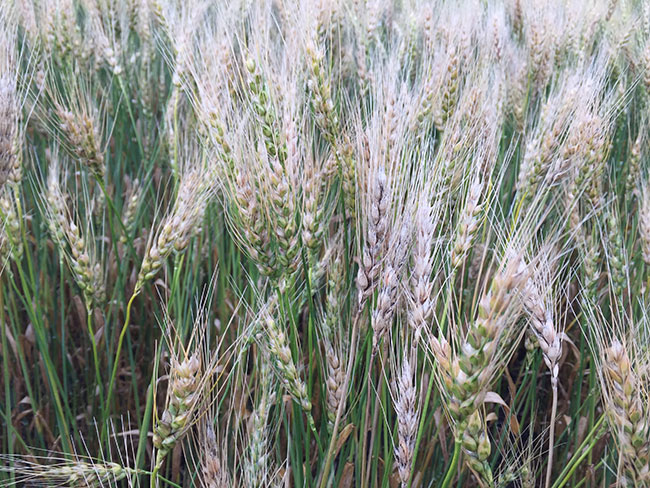 Fusarium head blight (FHB) is a serious disease in wheat across Western Canada, causing substantial losses in some crops. This disease can significantly reduce yields and also result in downgrading or complete loss due to high toxin content in the grain. FHB creates a management challenge because highly resistant wheat varieties are not available and fungicides do not provide complete FHB control. Therefore, researchers and plant breeders continue to investigate new forms of FHB resistance.

Randy Kutcher, professor and chair of the Cereal and Flax Crop Pathology Lab at the University of Saskatchewan, in collaboration with Plant Gene Resources of Canada (PGRC) and the National Research Council (NRC), is investigating new sources of FHB resistance in spring wheat. “We recognize that host resistance, coupled with other integrated pest management practices, is considered the best approach to control FHB,” Kutcher explains. “FHB is a difficult disease against which to develop resistance in wheat, as breeders have to bring in several resistance genes together because there isn’t a single gene offering strong resistance to FHB. Therefore, the objectives of our recent project launched in 2016 are to identify wheat germplasm with new sources of FHB resistance by screening PGRC accessions and evaluate them in our field FHB nursery. A second objective is to identify novel alleles for FHB resistance from a synthetic hexaploid wheat population.” 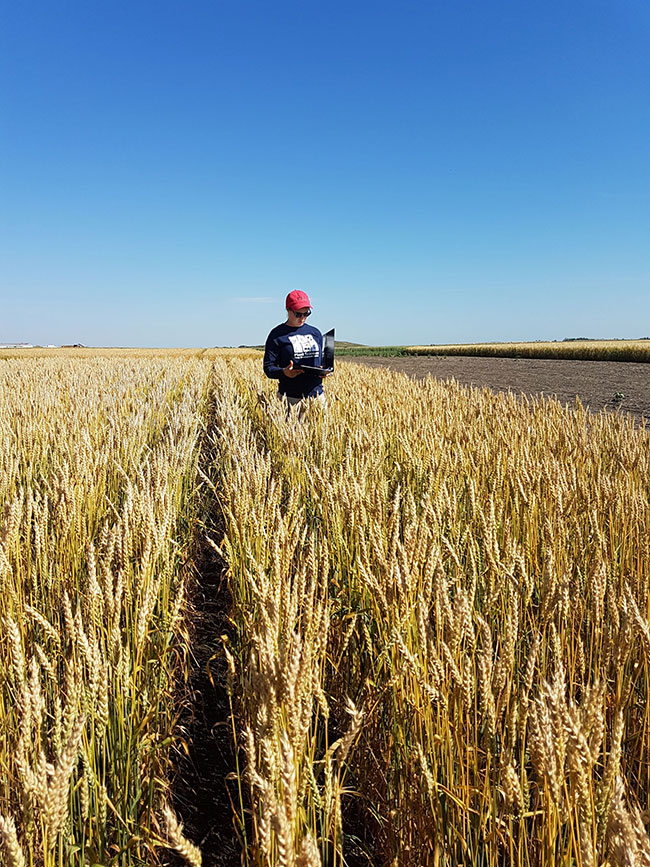 The project began with an evaluation of 14,000 wheat accessions from the PGRC collected from all over the world. Researchers selected 4,000 lines for further screening. “We then evaluated these 4,000 PGRC lines, along with an additional 412 lines from a synthetic hexaploid wheat association mapping (SHW AM) panel in our FHB disease nursery at Saskatoon in 2016 and 2017,” says Lipu Wang, research officer at the University of Saskatchewan. “The FHB disease incidence and severity was assessed for each line to determine the FHB index. As a result, 400 lines with the lowest FHB index were selected for further genome-wide association study (GWAS) analysis.” 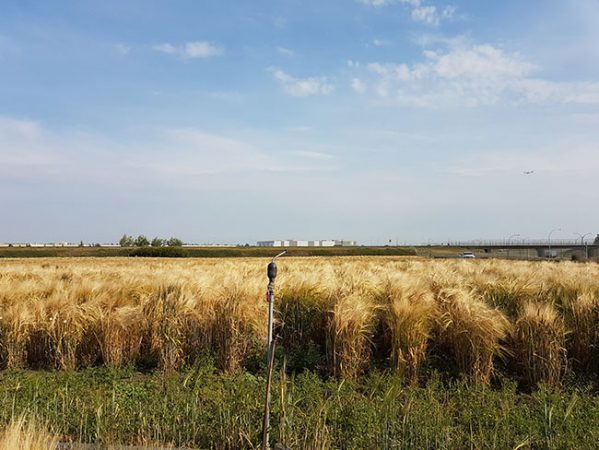 Mature wheat at the end of growing season in the field research trials. Photo courtesy of L. Wang.

Zhang adds resistance breeding currently relies heavily on resistance from Asian sources and therefore the goal is to try to identify novel sources from other regions that may offer different resistance. Although resistance can be successfully moved from other sources to Canadian cultivars, the result can be lower yield and quality. “Therefore, we are trying to identify novel sources from bread wheat, amber wheat and tetraploid wheat that can provide improved Canadian cultivars and balance higher disease resistance with yield, quality and other agronomic traits. Many of the bread wheat varieties currently available have moderate resistance to FHB, but we would like to be able to increase that to high FHB resistance. Durum wheat is still a big challenge for breeders, with efforts underway to move varieties from susceptible to at least an intermediate level of resistance.”

“We have recently started a new related project, and are taking the most promising lines and rescreening them for mycotoxins, such as deoxynivalenol (DON),” Wang says. “The ultimate goal in FHB resistance breeding is to develop productive cultivars with disease resistance and low mycotoxin contamination despite high infection pressure. In this project, we are working on identifying markers and developing a rapid, accurate and low cost DON diagnostic and quantification platform for high-throughput DON phenotyping. We are also developing tools to simultaneously identify and quantify DON and its derivatives, including D3G (deoxynivalenol-3- glucosides) and others. This approach will allow breeders and industry to screen and analyze a large number of samples faster, cheaper and more reliably for toxins in wheat infected by FHB. This project together with the development of new sources of FHB resistance will help researchers and plant breeders to improve FHB resistance in Canadian wheat cultivars in the future.”