Features Insect Pests
Look out for diamondback moth in 2019

Despite its short life cycle, this pest can cause big damage. 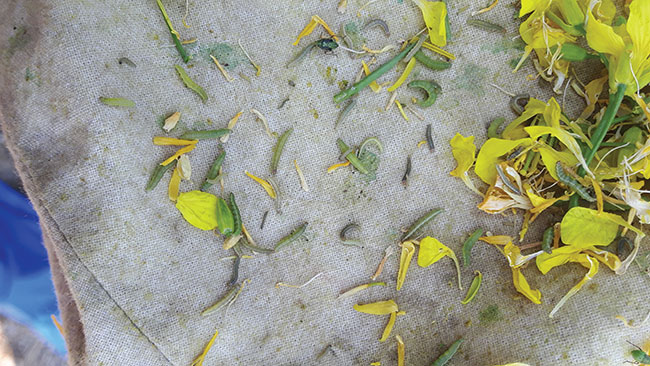 A diamondback moth and lygus in Alberta. Photo courtesy of Keith Gabert.

Most Canadian canola producers are familiar with Plutella xylostella, or diamondback moth. It’s a pest of cruciferous vegetables and field crops, including canola, and one that can be particularly difficult to manage due to its short life cycle. In countries where it overwinters, such as the United Kingdom and the United States, the pest has developed insecticide resistance to a wide range of chemistries.

In Canada, diamondback moth does not overwinter well, according to John Gavloski, Manitoba’s provincial entomologist. Each summer, the pest establishes itself locally after moving in on the winds from sites in the southern United States.

“It would be more likely for an insecticide resistant population to blow in, rather than for resistance to develop locally,” Gavloski says. “Diamondback moth is not an insect that canola growers spray for annually in the Canadian Prairies, and cruciferous vegetable production is limited to a small number of acres. So the risk of diamondback moth populations developing resistance to insecticides locally would be small.” 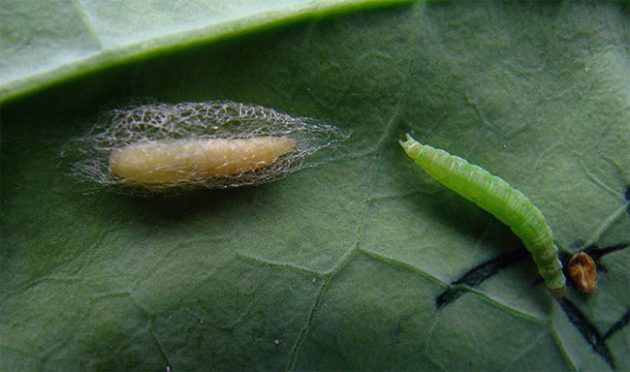 In Canada, diamondback moth does not overwinter well. Photo courtesy of John Gavloski.

Even with no confirmed cases of insecticide resistance to date in Western Canada, diamondback moth can still cause severe economic damage in canola and the pest remains on the scouting checklist in all three Prairie Provinces.

According to James Tansey, provincial specialist in insect management for Saskatchewan, diamondback moth can be a “very serious” pest of canola in the province. “Larvae feed on leaves, buds, flowers, seed pods, stems and seeds within seed pods,” he says. “Recent populations have luckily been pretty low.”

In Alberta, 2017 saw the largest recorded outbreak of the pest in Western Canada history, according to Scott Meers, insect management specialist for Agriculture and Agri-Food Canada in Alberta, “but for the most part this is an insect with sporadic outbreaks.”

In 2017, however, there were several suggested incidences of insecticide resistance, says Meers – most likely due to improper insecticide application, for example the use of synthetic pyrethroids at too-high temperatures.

“Diamondback moth is certainly quite capable of developing resistance to insecticides,” Gavloski says. “It’s recommended to use economic thresholds and use insecticides only when necessary.” 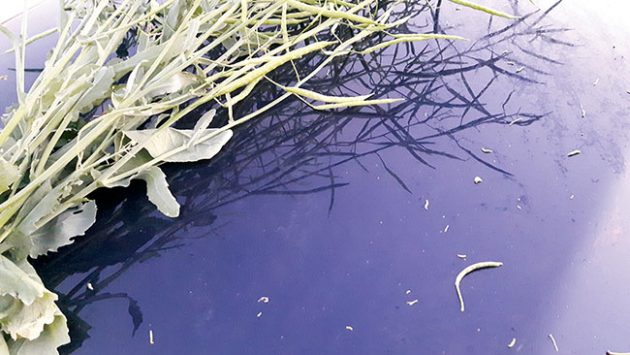 Diamondback moth is generally detected when feeding becomes visible on leaves, says Keith Gabert, agronomy specialist based in Innisfail, Alta., for the Canola Council of Canada.

“Feeding damage and ‘windowpaning’ becomes evident very quickly,” he says. “On rare occasions it becomes a challenge for the grower to identify what pest is causing leaf damage to the plant, but diamondback moth damage and larvae are easily identified with repeated scouting due to the rapid lifecycle of the larvae through to adult moth.”

Because of the pest’s short life cycle, which can be completed in 21 days, “small larvae that are difficult to identify quickly become green half-inch diamondback moth larvae with a forked tail that wiggle conspicuously when disturbed,” Gabert says.

Meers says major yield loss happens after larvae move from feeding on leaves to pods. “Because the yield losses result from shattering if pod integrity is compromised by diamondback moth larval feeding, the thresholds are very high,” he says. “Spraying is recommended if numbers exceed 20 to 30 per square foot (200 to 300 per square metre).”

A healthy crop retains a canopy of leaves late into the season. If these leaves drop early or are already eaten by an insect pest, then rapid yield loss occurs with pod feeding and damage as these insects move upward, Gabert says.

Tansey says scouting in Saskatchewan should run from late May to early September, with weekly scouting in July and August. His recommended method is to beat plants from one square foot or one-tenth of a metre at five sites, catching the dislodged larvae in a tray, sheet or net. The number of larvae can be multiplied by 10 to get a number per square metre. In immature and flowering fields, the economic threshold for spraying is 100 to 150 larvae per square metre, says Tansey; in podded fields, this number is 200 to 300 larvae per square metre.

Meers recommends sweep net sampling at early flowering to get a sense of relative risk after flowering.

“Presence of larvae in insect sweep nets when scouting for cabbage seedpod weevil (CSPW) or other pests may also indicate the need for further scouting,” Gabert adds. 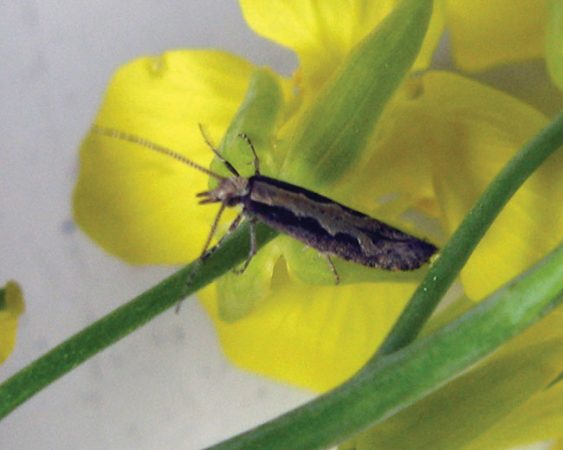 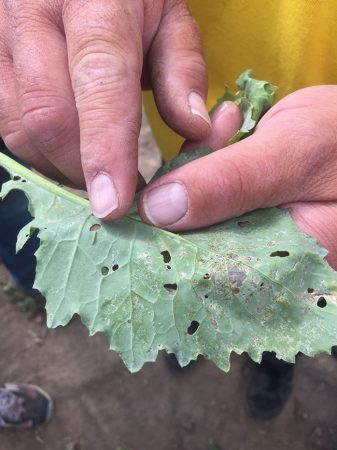 While there are several options for chemical control, including Coragen, Decis 5EC/Poleci, Matador /Silencer, Voliam Xpress, Malathion 500, Malathion 85E and Chlorpyrifos, Tansey says natural enemies should be evaluated before spraying, as these can often offer effective control against diamondback moth and are sensitive to many sprays (especially the parasitoid wasp Diadegma insulare).

“AAFC also models the wind trajectories to determine if conditions are right for movement of these animals from the U.S. to the Canadian Prairie Provinces. Keep an eye on these resources for up to date information on potential issues,” Tansey says.

Alberta Agriculture maintains an early warning system of traps in May and June, which offers a sense of population migration from the southern U.S., says Meers.