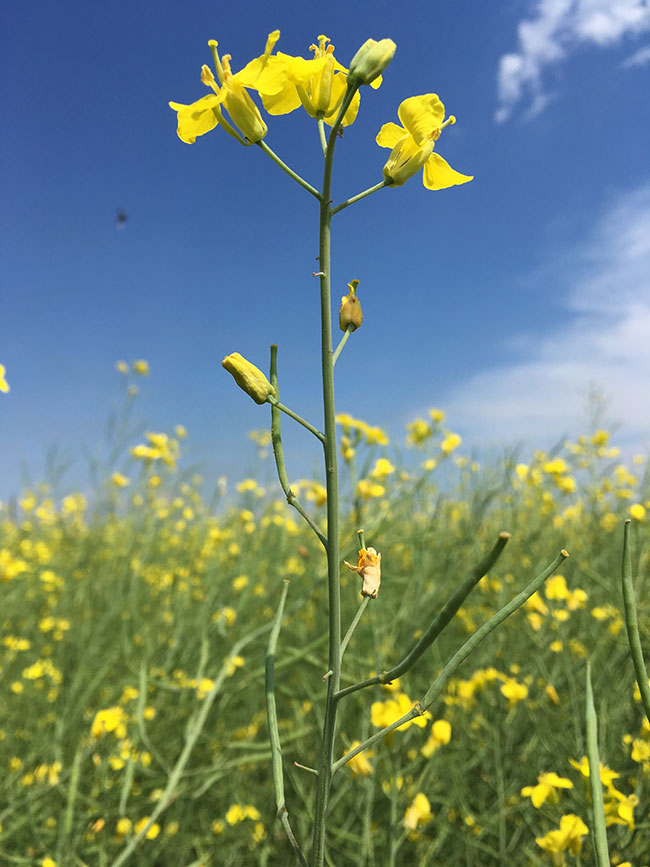 In 2012, the first canola flower galls were observed on the Prairies. Early indications were that the galls and flower damage were caused by the swede midge, a serious pest of canola and other Brassica crops in Ontario. However, recent field survey observations, together with genetic and other evidence have convinced researchers that the Prairie midge is a different species.

“We have been investigating this new midge species over the past few years, and have just recently officially identified and named it,” explains Boyd Mori, research scientist in insect ecology with Agriculture and Agri-Food Canada in Saskatoon. “We discovered this Prairie midge is a new species never identified before and new to science. This new species has officially received a scientific name and is now formally identified and described.”

The common name is canola flower midge, because so far it has only been found on canola flowers. The new official scientific name is Contarinia brassicola, which is in the same genus but a different species than swede midge or Contarinia nasturtii. The formal description of C. brassicola will be published in The Canadian Entomologist journal, which will include behavioural, morphological, and genetic evidence that clearly indicates differences between the Contarinia sp. collected in Saskatchewan and Alberta and swede midge. Researchers speculate that C. brassicola may be a native prairie midge species that switched hosts as canola production expanded. Some of the genetic work suggests that this species has probably been around for some time, but went unnoticed.

Field survey results indicate that the canola flower midge is fairly widespread across the Prairies, particularly in the Dark Brown and Black soil zones, although so far damage is very minimal. In 2018, field surveys conducted in Alberta detected damage symptoms as far north as the Peace region, and as far east as Portage la Prairie, Man.

“So far the amount of damage we are seeing is like finding a needle in a haystack,” Mori notes. “In our field surveys we sample 10 locations in each field and collect 10 canola racemes [flower clusters] at each location. In most fields, we would find maybe one to three flowers in total across the 100 racemes with any symptoms. In an occasional field, we can find maybe upwards to 10 flowers of 100 racemes infested, which so far were only observed in north-east Saskatchewan near the Tisdale, Carrot River and Nipawin area, and an Alberta site south-east of Edmonton near Wainwright. However, overall most sites had very low numbers and no measurable economic damage.” 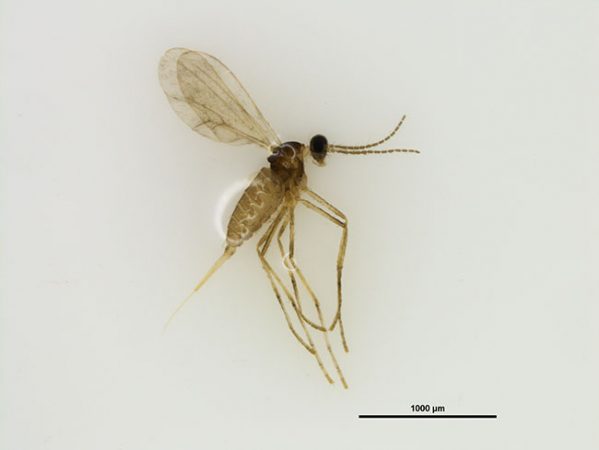 The results of the field surveys over the past summer in 2017 and a few years prior have not detected any swede midge on the Prairies. So far, swede midge, which was first identified in North America in Ontario in 2001, is only found throughout Eastern Canada, the northeastern U.S. and as far west as Minnesota. Researchers expect that the earlier findings in the Prairies were likely mistakenly identified, now that more information and DNA testing have become available for comparison and identification of the new canola flower midge.

“Our current project will continue for one more year in 2019, which will include ongoing field survey monitoring and impact assessments,” Mori says. “We discovered early on that the swede midge pheromone traps failed to attract the canola flower midge, so we have also been working with the University of Greenwich in the U.K. to develop a specific pheromone monitoring trap lure. Several components were identified and included in a trial lure in the field in 2018. Although we know we are on the right track, it did not work as well as expected as we did not attract high enough numbers in the areas we were testing. For 2019, we have added in some more minor components to the pheromone trap lure and expect that we will see higher numbers attracted to the traps.”

Mori notes, the good news is they have confirmed so far that swede midge is not found on the Prairies, and this newly identified canola flower midge, C. brassicola is not causing economic damage in canola crops. “We will continue to monitor populations across the Prairies and assess the impacts in 2019, and hopefully will eventually incorporate the monitoring into the Prairie Pest Monitoring Network program in the future. Once we have finalized the pheromone trap lure, we will be able to share it with colleagues across Canada, the U.S., Europe and elsewhere to find out if this midge has a broader distribution than the Prairies and to learn more about whether it is a native species or introduced. We will continue to keep a watch on this new canola flower midge through our monitoring and impact assessment program.”


Related
Newly discovered species named the Canola Flower Midge
What we know (so far) about the new midge on the Prairies
Assessing the swede midge threat
Stamping out swede midge?