In Saskatchewan, leaf blotch disease complex has become more prevalent in oat fields in recent years, but very little is known about the impact of these diseases on oat production. In infected fields, oat yield and grain quality, including test weights, are often reduced, which can impact milling quality and reduce returns. 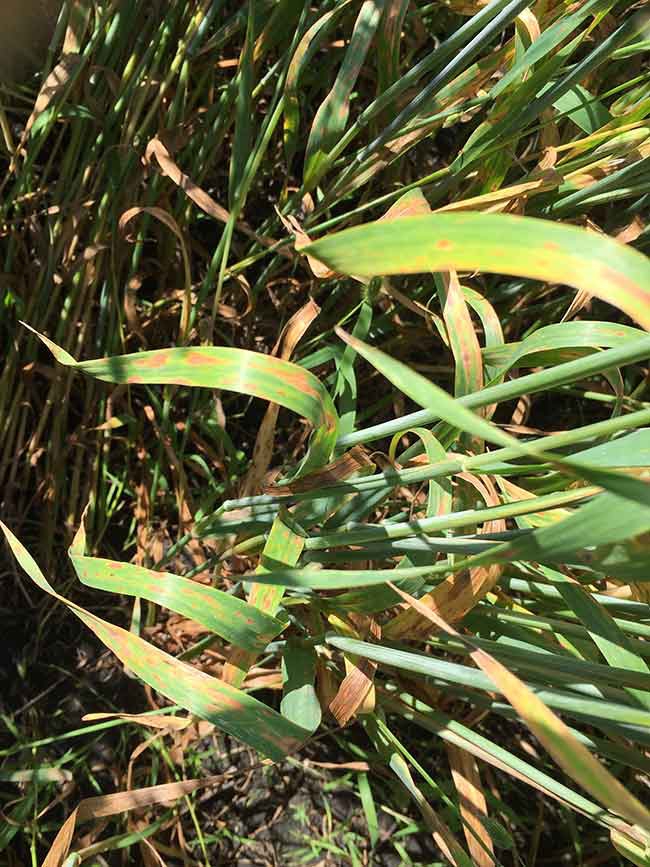 Researchers at the University of Saskatchewan are developing screening techniques to evaluate and understand oat leaf blotch pathogens, and to try to identify leaf blotch resistance that can be added to the oat breeding program and improve varieties.

Researchers are now into the second year of a three-year project. To date they have addressed some of the initial questions and are now moving forward on screening oat germplasm to identify genetic resistance. “Based on the disease survey results from 2015, we have confirmed that the two main pathogens causing the leaf blotch disease complex in oat are Pyrenophora avenae and Cochliobolus sativus,” explains Tajinder Grewal, research officer and project lead with the University of Saskatchewan. “Using a single spore isolation technique of 18 isolates of P. avenae and 17 isolates of C. sativus were cultured. We also successfully developed an indoor screening technique for identifying leaf blotch resistance in oat, studying the inheritance of resistance and developing molecular markers for oat breeding. We assessed several different parameters including temperature, humidity, plant growth stage, spore concentration and other factors in the development of this standardized technique.”

Grewal initially screened nine oat lines with all 18 isolates of P. avenae and 17 isolates of C. sativus to see if the infection response was similar and to understand disease symptoms, progression and spore production. “We then selected 32 oat lines and screened them with a smaller set of isolates,” Grewal says. “From the results, we identified some lines with resistance to these pathogens, some lines that were susceptible, with the majority of the lines showing intermediate reaction. The next step is to evaluate lines from our Western Canadian elite oat collection, which includes over 300 advanced oat lines and varieties from different oat breeding programs in Western Canada. We have selected 200 lines and will use our standardized technique to screen them with both P. avenae and C. sativus isolates to identify the lines with the most resistance to these pathogens.” Screening will be performed in the University of Saskatchewan Phytotron, a controlled-environment plant-growth facility.

Early results from the screening of several bi-parental populations indicate leaf blotch disease resistance in oat is controlled by a single gene. Grewal adds as they continue through the screening process, they will be able to confirm how many genes control the resistance to P. avenae and C. sativus in oat. “Once we know the number of genes, we can develop molecular markers that plant breeders can use to transfer the resistance into elite oat lines. Our ultimate goal is to incorporate resistance into oat cultivars to sustain oat yield and quality and improve returns for growers. We recognize that oat is already a low input crop, so if we can keep it that way by providing disease-resistant varieties, both growers and processors will benefit.”

Jeffrey Freedman, an oat grower in northeastern Saskatchewan near Ridgedale, has so far seen little leaf blotch disease in his fields, but looks forward to new cultivars with improved resistance. He grows, on average, 4000 acres of oat every year, mostly the newer milling variety CS Camden, as well as some specialty contract acres in rotation with canola, wheat, barley and, more recently, fababean and hemp. “Although leaf blotch disease so far is quite low in our fields, crown rust is our biggest disease issue on oats, especially when we get a wetter spring like 2014,” Freedman says. “Our most important management strategy is to work on a balanced fertility package including potash (K) to try and establish as healthy plants as possible and get their natural defense mechanisms to kick in. Advancements in oat variety development with improved traits are important to the industry.”

The project will be completed at the end of 2017 with final results available in early 2018. The project is funded by the Saskatchewan Agriculture Development Fund, the Western Grains Research Foundation and the Prairie Oat Growers Association.