They are called natural enemies, but more appropriately, they are farmers’ friends. Now, research in Manitoba is finding out how important natural enemies are in managing soybean aphid outbreaks.

“The last year that soybean aphid was a more widespread and economical concern in Manitoba was 2011. The last three years the populations have generally been low, with the aphids not even being noted in fields until late-July,” says John Gavloski, entomologist with Manitoba Agriculture, Food and Rural Development (MAFRD) at Carman, Man.

Then, farmers friends’– natural enemies – came along. Gavloski says that by mid-August 2011, the levels of natural enemies, particularly lady beetles and hover fly larvae, were very large in some fields, and had halted the increase in soybean aphid numbers. “This resulted in very noticeable decreases in soybean aphid numbers in some fields,” he says.

The soybean aphid was first discovered in Wisconsin in July 2000, and has since spread to other States and into parts of Canada. It was found in Ontario in 2001, and widespread outbreaks in Manitoba occurred in 2006 and 2008. Insecticide application for control of soybean aphid has grown 130-fold in the U.S., and yield losses have reached $2.4 billion annual in the north-central region of that country.

Given the impact soybean aphids have in the U.S., much research has been conducted into understanding the insect, its natural enemies and the development of an integrated pest management plan. In Canada, research by assistant professor Alejandro Costamagna at the University of Manitoba is providing local insight into soybean aphid natural enemies. Graduate student K. G. Lahiru Ishan Samaranayake is assisting him.

Costamagna previously conducted research on soybean aphids when he was at Michigan State University. He says researchers in the U.S. Midwest learned that natural enemies can keep soybean aphid levels below the economic threshold level, and that insecticide treatment is often not required. He also says that in the U.S., beneficial predators move in from other crops to feed on soybean aphids once aphid populations start to establish.

Soybean aphids overwinter as eggs, and go through three or more generations on buckthorn (Rhamnus spp.) before migrating to secondary hosts such as soybean. Research at the University of Minnesota by Brian McCornack found that soybean aphid eggs have a super-cooling point of -34 C, the temperature at which they would not survive. McCornack said, “During the winter, extreme low air temperatures are likely to reach or exceed the mean super-cooling point of soybean aphid eggs in portions of northern Minnesota, northern Wisconsin and the upper peninsula of Michigan. Thus, widespread successful overwintering in the northern United States and southern Canada is less likely than in Illinois, Indiana, Ohio, Iowa, southern Minnesota, southern Wisconsin and the lower peninsula of Michigan.”

Because soybean aphids aren’t usually noticed until later in July in Manitoba, it is assumed they are coming in on the wind from the U.S. If soybean aphids overwintered, they would be noticed sooner on soybean plants, notes Costamagna. “They shouldn’t overwinter here. Most likely it is the second or third generation from the U.S. that is flying here.”

Understanding natural enemies
One of the first Canadian studies on natural enemies was conducted in 2004-2005 by Marc Rhainds at the Université de Montréal. Caged soybean subplots that excluded predators were compared to uncaged subplots where predators could move in to eat soybean aphids. Where predators were excluded in the caged subplots, aphids attained a high density and caused severe reductions in yield, especially when plants were infested early in the season. In the uncaged subplots, the aphid population grew slowly and had a relatively weak impact on yield because of predation. The generalist predator population was predominantly lady beetle.

In a study at Guelph, Ont., research associate Yingen Xue conducted research that investigated the healthy appetites predators have for soybean aphid. Seven-spotted lady beetle (Coccinella septempunctata) females ate, on average, 115 soybean aphids in 24 hours, with the males eating 78 and the third instar larvae eating 105. The theoretical daily maximum predation rate was predicted to be 204 per third instar, 277 per adult female and 166 per adult male.

Xue also discovered the multicoloured Asian lady beetle (Harmonia axyridis) had a big appetite for soybean aphids, with the females eating, on average, 95 soybean aphids in 24 hours, while males ate 54 and third instars ate 112. The theoretical maximum daily predation was 244 for third instars, 156 for females and males at 73. Xue noted both insects had high predation capacities and are important in suppressing soybean aphid populations.

In Manitoba, Costamagna and Samaranayake have conducted three years of research on soybean aphid predators to get a better understanding of natural enemy predation in Manitoba. While at the University of Michigan, Costamagna found that natural enemies could keep soybean aphids below economic injury levels, particularly lady beetles. Now in Manitoba, he is working on identifying common soybean aphid predators, the effectiveness of the predators, if predators in alfalfa may move and be effective in soybeans, and what agricultural landscapes are the most likely source of beneficial insects.

“We’re trying to understand the movement of natural enemies and if there are situations where it is likely to have better control with natural enemies,” says Costamagna. “What risk and what benefit does the surrounding landscape provide to natural enemies? We’re trying to answer some of those questions so that we can develop integrated approaches for soybean aphid control.”

Costamagna compared soybean aphid suppression between four neighbouring alfalfa and soybean fields during 2012. In each field, he infested 10 potted soybean plants with aphids, and exposed half of them to natural levels of predators and the others were caged to exclude natural predators. During 2013 and 2014, Costamagna and Samaranayake continued monitoring predation on soybean aphid on 25 additional fields in Manitoba. They also monitored the movement of natural enemies between soybean fields and neighbouring fields using bi-directional Malaise traps placed in field borders.

In all fields over the three years, aphids on the caged soybean plants reached threshold levels in two fields (2013) and in all fields (2014) within two weeks. However, where natural predation was allowed to occur, the predators always kept soybean aphid populations below the economic threshold of 250 aphids per plant. This amounted to a three- to 22-fold reduction in soybean aphids compared to the caged control.

Preliminary analysis of the bi-directional Malaise traps suggest a significant movement of hoverflies, lady beetles, and brown and green lacewings from alfalfa and natural vegetation to soybean.

In another effort to understand predator movement, Samaranayake conducted two, marked-release-recapture experiments of the seven-spotted lady beetle. The lady beetles were captured from wheat and alfalfa fields, and marked with paint dots in unique combinations that identified the crop and point of release. Crops were swept with a net four times per day for 96 hours after release. Six hundred and fifty four lady beetles were released in 2013 and 600 in 2014, and about 5.5 per cent were recaptured. He says that preliminary results show a trend of lady beetles moving greater distances in short periods of time from soybean to alfalfa fields, but also some movement in the opposite direction. Costamagna says this is most likely due to the absence of aphids in the soybean fields studied, so the lady beetles moved to alfalfa in search of prey.

“We are seeing that predators can move from field to field in response to aphid infestations. Our next step is to try to understand how the greater landscape affects predator populations and movement,” says Costamagna. “This is very hard information to collect. Most research is done on a field basis; so we are trying to map the surrounding landscape to try to determine how predator movement is affected.”

Maintaining healthy populations of natural enemies
Costamagna’s research has identified that alfalfa and natural vegetation can be sources of natural predators of soybean aphid. Maintaining populations of predators should be a high priority for soybean growers. The key method is to only spray when economic thresholds are reached, in soybean or other source crops like alfalfa.

Gavloski says that in soybean, the economic threshold for aphids considers three factors: 250 aphids per plant; the population is increasing; and the plants are in the R1 (beginning bloom) to R5 (beginning seed) growth stages. He says the reason “the population is increasing” is part of the threshold is because the actual economic injury level, where control costs will equal yield loss, is about 670 aphids per plant. However, because soybean aphid populations can double in as little as seven days if natural regulating factors are low, the lower population number is recommended to allow time to spray the crop before populations reach 670 aphids per plant.

Gavloski says that in most years, natural enemies can keep soybean aphids below threshold levels, so it is important to scout frequently and only spray if economic thresholds are reached. 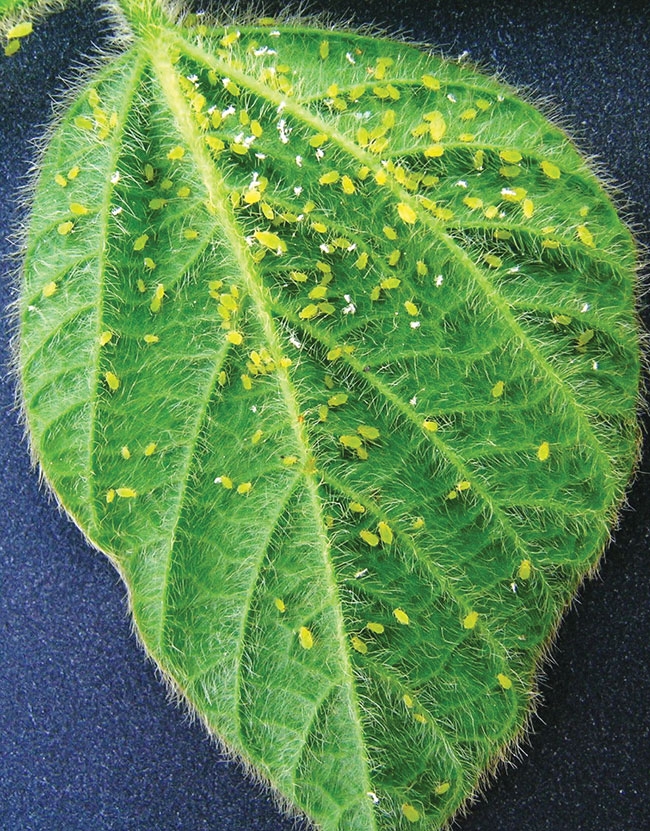 Soybean aphids are commonly controlled by natural predators. They are called natural enemies