Easy to grow. Easy to harvest. Nitrogen-fixing pulse crop. What’s not to like about growing fababeans? That’s why farmers on the Prairies are catching on.

“There was a big acreage increase in 2014,” says Mark Olson, unit head, pulse crops with Alberta Agriculture and Rural Development (AARD) at Stony Plain, Alta. “Some of the acreage could be from guys who have never grown pulses because they had heard about the lodging challenges with field pea and they may have had rocky land not suited to peas. But with fababeans, they pod fairly high off the ground and don’t lodge, so it is opening up more acres to pulses.”

The increase in fababean production is in part fuelled by improved varieties that mature early and yield well, along with the development of low tannin varieties. Tannins are not suitable for non-ruminant animals such as pigs, horses, rabbits, cats and dogs. Cattle can digest tannin-type fababeans, and they are also popular in the human edible market in the Middle East and Asia.

Markets are being developed on the Prairies. Locally, fababean producers can look to companies like AGT Food and Ingredients, Parkland Alberta Commodities, and feed companies to contract and sell fababeans. Prices have come down from their highs of a few years ago, and are ranging in the $6 to $7 per bushel range. Yield potential is high, with dryland yields in the 70 to 80-plus bushels per acre and irrigation yields in the 125-plus bushel range.

Stand establishment
Fababean variety selection should be based on a combination of tannin type and agronomic performance. FB 18-20 and Malik (9-4) have white flowers with a black dot and tannin-containing seed coats (seed coats are brown). These cultivars were bred by Dr. Bert Vandenberg at the Crop Diversification Centre in Saskatoon, Sask., and are available for contract production.

Imposa and Snowbird have white flowers and seed coats that have very low levels of tannins (seed coats are white). These cultivars were bred in Lelystad, Netherlands. Two new zero-tannin varieties, Snowdrop from CDC and Tabasco from NPZ Lembke (DL seeds), are in market development, and a few more are in the development pipeline.

Fababean is a cool season crop that likes good soil moisture and cool temperatures. Olson says hot temperatures can cause flower blast similar to what happens to canola if a heat wave occurs during flowering. Fababean requires a longer growing season, and early seeding is particularly important for high yield and good seed quality. Late seeding will result in frost-damaged seed, which limits the marketing of the product.

Research in north central Alberta emphasizes the importance of early seeding. Seeding as early as possible produced yields of 94 bushels per acre, while seeding two weeks later resulted in a 32 per cent loss in yield, dropping to 71 bushels per acre.

“That is a pretty significant loss in yield,” says Olson. “Our recommendation is to seed as early as you can get onto the land (have traffic ability), and try to seed by the end of the first week of May. Fababeans have good spring frost tolerance, and if frozen off the plants, will regenerate from nodes at or near the soil surface.”

Additionally, higher seeding rates also hastened maturity when the crop was seeded late (May 27); however, late seeding is not recommended. The research found that increasing the seeding rate from 32 plants per square metre to 65 plants per square metre increased the percentage of black pods from 65 to 75 per cent by the second week of September. The researchers stated that ideally, fababeans should have 90 per cent black pods by the second week of September, which can usually be achieved with early seeding. In years when late seeding occurs, higher seeding rates can help enhance maturity, but this approach is still not as effective as early seeding.

Olson cautions that seeding rate should be based on thousand seed weight since there is a large variation in seed size between fababean varieties. Varieties range from 350g to 750g per 1000 seeds, which is huge. To hit the targeted plant population, the seeding rate could vary from four to 5.5 bushels per acre. With a seed size that ranges from 30 per cent to 100 per cent larger than field pea, Olson says some air delivery systems could be challenged by the volume of seeding moving through the manifolds, especially if growers are pushing seeding rates up to 65 plants per square metre. As well, it is critical growers check to see if the fababean seed can flow through the end of the seed boot.

Fababean seed should be inoculated with a nitrogen-fixing rhizobia bacteria. Olson says fababean is the highest nitrogen-fixing pulse crop, and the inoculant should be specific to fababean so that nitrogen fixation occurs late into the growing season. Monsanto BioAg (formerly Novozymes) recently received registration for granular TagTeam, and Becker Underwood Canada has a self-adhering peat-based inoculant registered for fababean called Nodulator.

For growers worried about seed rot, seedling blight and root rot caused by Fusarium spp., Rhizoctonia solani, and Pythium spp., Olson says fababean appears to be more resistant than pea, but time will tell. He notes farmers have observed that when fababean is substituted for pea in a four-year rotation, the incident of root rot is decreased. Olson says early indications are that fababean may also have good resistance to Aphanomyces euteiches, a new strain of root rot of field pea that is causing concern in Western Canada.

“Stay tuned on this one. Early indications are our current fababean varieties have good resistance. France was ground zero for Aphanomyces, which a had dramatic effect on the pea industry there,” says Olson, who adds we can learn a lot from the French researcher’s experience and knowledge.

Growers should also pay careful attention to herbicide residues from previous years when selecting fields for fababean production. Fababean is quite sensitive to some herbicides, and growers should review herbicide labels to determine if there is a potential for seedling injury.

Another interesting research study conducted in 2004 found that honeybee pollinators had a positive impact on fababean yield. Medhat Nasr, AARD provincial apiculturist, found that honeybees in caged fababean plots increased yield by 26 per cent compared to open plots. Yield of fababean plots five metres away from honeybee hives increased by 47 per cent, and plots 250 metres from beehives increased 29 per cent compared to plots 500 metres away.

Protecting the crop
Olson says fababean has similar weed competitiveness as field pea. He says targeting a plant stand of at least 45 plants per square metre will help the crop compete with weeds.

While registered herbicides are limited, there are some choices. Basagran, Odyssey, Edge Granular, metribuzin (Sencor) + Treflan (trifluralin) in a pre-plant incorporated mix, Poast Ultra, Assure II and trifluralin alone can be used to control weeds. Authority, a preplant or pre-emergence herbicide for control of broadleaf weeds, was recently registered. Viper ADV has been forwarded for minor use registration.

“Don’t use MCPA or Sencor [metribuzin] as post-emergent herbicides. They are pretty tough on fababean and for that reason minor use registration was not pursued,” says Olson.

From an insect perspective, Olson says pea leaf weevil seems to prefer fababean over pea, and bertha armyworm and lygus bug can also be pests. In Saskatchewan and eastern Alberta, the blister beetle has been seen attacking fababean. Grasshoppers can also be a major insect pest. Lambda-cyhalothrin (Matador) is registered for use of control of insects on fababean. Consult labels for registered insecticides and preharvest intervals.

Chocolate spot caused by Botrytis fabae and Botrytis cinerea has been observed on some fababean crops, but Olson says research needs to be done to figure out whether it is economical to spray. There are no registered fungicides for control, although Lance fungicide is registered for sclerotinia control on fababean and it is also registered for control of botrytis in pea, lentil and chickpea. Following a four-year rotation is the best strategy for managing disease in fababean.

Harvest management
Fababeans are suited to straight cutting with good standability and pods quite high off the ground. As the crop matures, the lower leaves darken and drop, and the bottom pods turn black and dry from the bottom to the top of the plant. To reduce shattering, Reglone desiccant can be applied when most plants are ripe and dry, when pods are fully filled and when bottom pods are black in colour. Combine when moisture content of the seed is at 18 to 20 per cent, and aerate to 16 per cent for safe storage.

Where fababean acreage ends up in 2015 will depend on a combination of seed availability, market opportunities and commodity prices relative to other crops. What is certain, though, is that fababean still has much upside potential. 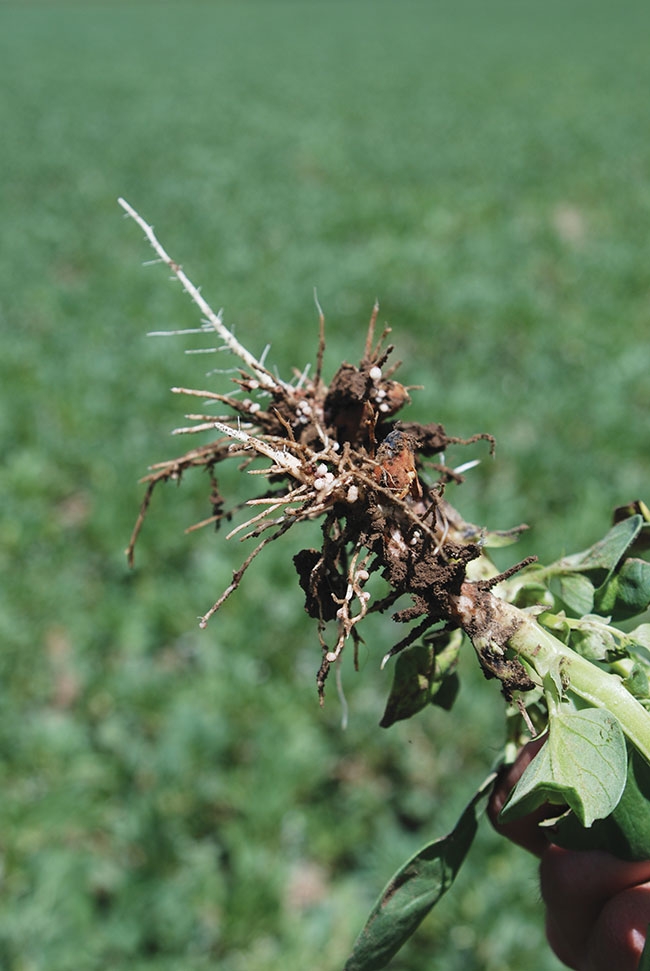