The humble oat is a nutritional powerhouse, and among its many nutritional components are avenanthramides. These naturally occurring compounds, found only in oats, are known to soothe itchy and irritated skin, and research is pointing to other possible health benefits. Edmonton-based Ceapro Inc. is extracting avenanthramides from oats and supplying the extracts to growing markets.

“Ceapro is the only company in the world extracting avenanthramides from oats using a fully patented proprietary technology,” says Gilles Gagnon, Ceapro’s president and chief executive officer. In addition to avenanthramides, the company has developed and commercialized various other products from oats such as beta glucan, which helps reduce cholesterol, and oat oil.

Gagnon explains that the name “avenanthramide” derives from the Latin word for oats, avena. Oats contain more than 20 different avenanthramides. These phenolic compounds were discovered about 25 years ago by Dr. William Collins, a scientist with Agriculture and Agri-Food Canada (AAFC).

“Many scientific studies have been conducted on these compounds, and we know from lab and clinical testing that avenanthramides have anti-inflammatory, antihistamine [anti-allergic] and antioxidant properties,” says Gagnon.

According to Dr. Paul Moquin, Ceapro’s director of research and development, avenanthramides block redness and itchiness, and leave the skin healthier. “That is why our mothers and grandmothers put oats into bath water. The ancient Egyptians did that too. So this use for oats is not new, but we now know why it works, and we know the compounds responsible for the effect.”

The company’s avenanthramide extract is also used in products for dogs and cats. Examples include ear cleansers, shampoos and skin conditioners, all of which reduce irritation and promote healing. Ceapro’s hottest market for these animal health products is Asia, with a major customer in Japan.

Extracting avenanthramides from oats on a commercial scale is no easy task. Moquin says, “Avenanthramides are found in very small amounts in the oat kernel, plus the amounts vary quite a bit, depending on the growing season and the oat variety.”

To meet the challenges of avenanthramide extraction, Ceapro signed two agreements with AAFC in 2012. One agreement gives Ceapro the worldwide rights to AAFC’s technology to extract avenanthramides from oats. The other agreement is for Ceapro to test and register a new AAFC oat variety developed especially for use with this technology, with a view to negotiating a sole variety licence.

The technology plus the variety should help Ceapro extract higher quantities of avenanthramides, for greater production and improved cost efficiency. As the company develops novel avenanthramide formulations, it fine-tunes the extraction process to ensure production of standardized and stable avenanthramide extracts. Moquin explains, “Once we have a new formulation, we make sure it’s stable, and then find ways to scale up the process at a cost that allows us to sell it to multinationals as well as smaller companies.”

The new variety is a hulless oat. “Currently, most oats grown in Canada are hulled varieties, but we are interested in hulless or naked oats,” says Moquin. In hulless varieties, the oat kernel actually has a thin hull, which is loosely attached. It comes off during harvesting and is left on the field as chaff.

Ceapro prefers to use hulless varieties for a number of reasons. “To remove the hull from a hulled variety, mechanical systems are used which can damage the oat. Since oats are very high in oils, they can oxidize very quickly if the kernels are damaged. This creates a problem,” explains Moquin.  There are also added costs to remove the hulls.

In addition, he notes, “The actives that we want – the oil and the polyphenols – are found in higher quantities in the hulless varieties.”

The company uses hulless oats grown on the Prairies. “Ceapro works through the Prairie Oat Growers Association to select oat growers who grow these varieties for us on a contract basis,” notes Gagnon.

These contracted growers work together to share ideas on the best production practices for hulless varieties, which require slightly different practices than hulled oats. For Ceapro’s new variety, the company conducted a small pilot project in 2014 to fine-tune these practices and to grow seed for 2015.

Long-term potential
“We see fantastic potential for avenanthramides. In fact, our avenanthramide business has grown by 40 per cent this year over last year, and we expect this trend to be maintained over the next couple of years,” says Gagnon.

The potential lies not only in personal and animal care products, but also in nutritional and nutraceutical products because avenanthramides could have health benefits beyond skin care.

For example, Gagnon points to a recent U.S. study to assess the effects of avenanthramide supplementation for older women. The study found that daily dietary supplementation of avenanthramides for eight weeks reduced inflammation associated with walking and increased blood-borne antioxidant defence. Inflammation is an important concern in aging individuals because various diseases are associated with it.

“This research is further evidence of the anti-inflammatory properties of avenanthramides. It gives us a good starting point for future clinical trials with avenanthramides,” says Gagnon.

At present, Ceapro produces liquid avenanthramide solutions; however, the company is also developing powdered formulations for use in capsules and tablets aimed at the nutraceutical sector.

Moquin and Gagnon both emphasize the health benefits of eating oats. Oats have a strong nutritional profile, with vitamins, minerals, fibre, healthy fats, protein and carbohydrates, along with avenanthramides and other bioactives.

Moquin thinks hulless oats are the varieties of the future. For example, he notes that a Canadian company currently produces hulless oats that can be cooked like rice, but are more nutritious than rice.

He notes, “I think there is a strong future for oats, especially in the food area, where they are still not a common food. If oats were a bigger part of our diets, it would be a benefit to everyone.” 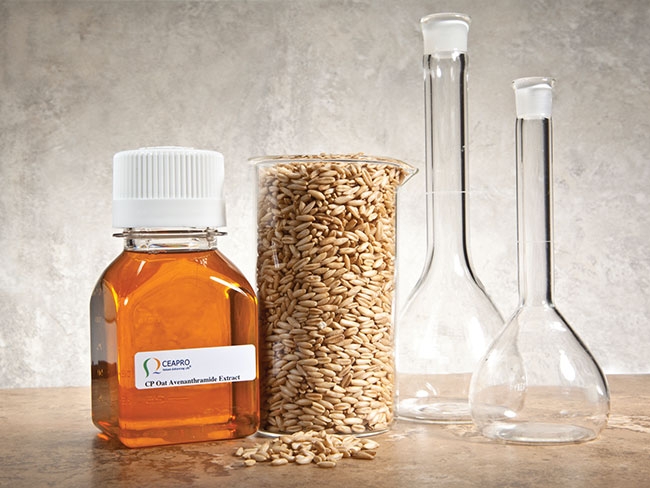 Ceapro’s avenanthramide extract comes from hulless oats grown on the Prairies. The humble oat is a nutritional powerhouse