A new study is helping Quebec researchers understand how to better control soybean aphid in the province. 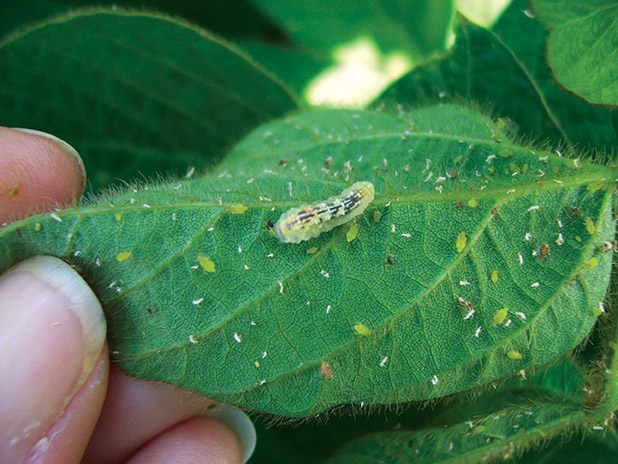 Julie-Éléonore Maisonhaute is the author of “Population dynamics of the soybean aphid in Québec,” along with Geneviève Labrie and Eric Lucas. The article, published this spring in the Journal of Economic Entomology, analyzes 12 years of archive and field data collected from the Montérégie area of Quebec. “There was no study in Quebec regarding the soybean aphid so it was the first big study looking at population dynamics,” Maisonhaute says.

Maisonhaute’s fieldwork involved sampling 30 plants per field in 37 to 40 fields per year from soybean emergence through the end of August or beginning of September between 2010 and 2012, and averaging the number of aphids on the plants. This data was analyzed together with data collected by the provincial phytosanitary surveillance network in the rest of the study period. The article notes soybean populations ran in two-year oscillation cycles in the region between 2005 and 2011, with severity increasing every second year.

But overall, Maisonhaute says, soybean aphid populations decreased in Quebec during the study period and there were some changes in the population dynamics for the past few years.

The decrease in soybean aphid populations is a trend that has been noted in Ontario too, says Rebecca Hallett, a professor in the School of Environmental Sciences at the University of Guelph.

Hallett references a 2015 study by her former student, Christie Bahlai (now at Michigan State University), that suggests seed treatment and foliar insecticide use has negatively impacted populations of soybean aphid in four midwestern states in the U.S.
“Neonicotinoids were never promoted as control for soybean aphid, but Bahlai’s modeling work shows that reducing the early season population growth of soybean aphid has resulted in widespread depression of populations,” Hallett says.

In Quebec, Maisonhaute points to factors including the efficacy of natural enemies and abiotic conditions, as well as the increasing use of neonicotinoid seed treatments, as possible reasons for the decrease in aphid density.

Management possibilities
The science of population dynamics lays crucial groundwork for the development of management strategies for insect pests such as soybean aphid, but it’s incredibly complex work. According to Maisonhaute, many factors influence population dynamics, including abiotic conditions such as temperature and rainfall, climate changes, the presence of natural enemies, use of insecticide treatments, landscape and the presence of other host plants.

Maisonhaute’s research offers local confirmation of generally known information about soybean aphid that could aid producers in combatting the pest. For example, she says, the researchers found landscapes with higher proportions of soybean attracted more soybean aphids in the Montérégie region. “On the opposite side, there are fewer aphids when landscapes are more diversified, when there are not only soybeans and corn but vegetable crops or other crops in the landscape – at least five to six different crops in a radius of 1.5 kilometres round the fields,” she says.

Another key inference from Maisonhaute’s study, and one that was first discovered by Bahlai in Ontario, is that the buckthorn shrub, an invasive species often found in Quebec hedgerows, is the overwintering site for the soybean aphids in the province. “We found a positive relationship between the presence of buckthorn in the landscape, and aphid density in the fields,” Maisonhaute says. “We knew it overwinters in buckthorn in the U.S. and in Ontario, but our research strongly [suggests] that soybean aphid now overwinters in Quebec.”

Natural enemies
Maisonhaute says there are three major implications to be drawn from her study. First, higher crop diversity nearly always decreases soybean aphid populations. Second, producers should consider destroying buckthorn shrubs in hedgerows. This is not a hardship, she notes, as buckthorn is a non-native species that damages the ecosystem in several ways: besides harbouring soybean aphids, it aggressively spreads and displaces native plants, and can serve as a host for the fungus responsible for oat crown rust.

Hallett has previously worked on dynamic action thresholds for soybean aphid in Ontario. A few years ago, after prompting from
producers in the province wondering about the impact of lady beetles on aphid populations, her team developed a smartphone application called AphidAdvisor (www.aphidapp.com) that can be used to calculate the economic imperative to spray.

“Producers can enter the number of aphids and natural enemies they see on a plant and it helps them with the decision-making
process,” she says.