Soybean aphid consumption by natural enemies: High levels of natural enemies have been reported by some monitoring levels of soybean aphid. Predaceous insects are the easiest natural enemies to recognize; levels of parasitism and insect pathogens are not often as obvious but with training can be estimated as well. Lady beetles, lacewings, and larvae of hover flies are some of the common and easily recognizable predators in soybean fields. 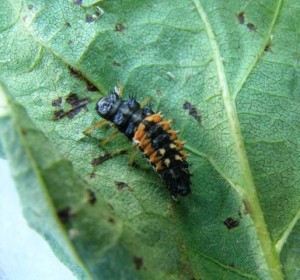 When checking soybean fields, consider whether the aphid populations are increasing or decreasing, and the level of natural enemies present.

Common species of lady beetle that may be noted in soybean fields include the sevenspotted lady beetle and the multicoloured asian lady beetle (Figure 1).

Some have been sending in photos of hover fly larvae, which may be found in many crops where aphids are present, wondering what they are. Although the adults, which are good bee mimics, are easy to recognize, the larvae may not be as well known. Note that hover fly larvae (Figure 2) are legless, and narrow towards the head. There are different species that can vary in colour, often brown or green.