Cutworms are a complex of several pest species that affect multiple crops grown in Canada. A few species can cause economic damage in cereal and oilseed field crops. Researchers are working to find efficient monitoring tools that can determine distribution of cutworms and alert growers to impending outbreaks, while excluding bee pollinators. 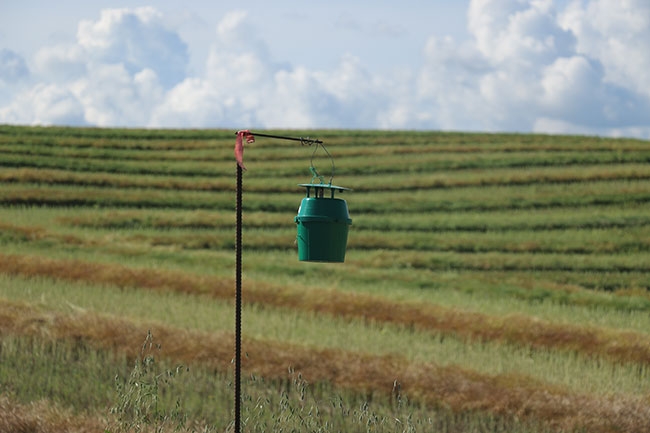 Green Unitraps baited with feeding attractant lures to monitor cutworm and other noctuid moths in Wainwright Cutworms are a complex of several pest species that affect multiple crops grown in Canada.

“Early research in the ’70s and ’80s focused on identifying sex pheromones for cutworm pests, and subsequently developed traps to monitor these species using sex pheromone cues,” explains Maya Evenden, professor and head of the Evenden lab at the University of Alberta. “However, these traps attracted moths from great distances, so [they] weren’t that good at reflecting local population densities. These moths tend to be quite large and are good fliers, so they could be travelling for quite a distance. Except for bertha army worms, these tools so far haven’t been successful enough to be adopted for monitoring cutworms.”

Researchers started looking for other monitoring tools for cutworms and explored synthetic food bait traps as a potential option. These traps are baited with mixtures of fermented sugars known to attract the noctuidae family of moths that cutworms belong to. These types of traps had not really been evaluated for use in wheat, barley or canola cropping systems where cutworms can be a problem. Evenden has conducted a number of different projects focusing on strategies to monitor multiple cutworm pests.

“One of the key differences with food bait attractants is both male and female moths are attracted to the traps, compared to only males in the pheromone trapping system,” Evenden says. “Having a better understanding of females is important because they are laying the eggs. The fermented sugar attractants also don’t provide long distance cues like pheromone attractants, so we expected to be able to attract moths closer in vicinity to the food bait traps, gaining a better understanding of local population densities. We conducted various field trials using these trapping systems, and noticed in the pheromone trapping there was also a lot of by-catch of bees, particularly bumblebees. This can be problematic depending on the timing of trap placement – for example, in early spring there are lots of flying queens, which can be at risk.”

“Cutworms are tricky, as some species overwinter as eggs, others as larvae, so they are damaging the crop at different times. This also means that moths are flying at different times. Therefore, in the study, one particular species was targeted – the red-back cutworm. For this species traps were set out later in the
season from mid-to-late July and through to September to monitor the cutworm moth. The late trapping period also helped to avoid the bees,” Evenden says.

“We have completed three field seasons of research on food bait traps and cutworms, and two field seasons including bees. Our preliminary results show that we have been able to catch a number of cutworm moths in the food bait traps. However, the challenge is we are catching both pest and non-pest species. Therefore, these traps will provide a good monitoring tool for understanding the community of cutworms in canola and wheat, but doesn’t seem to be as useful for estimating specific economic pest populations.”

Evenden adds that the findings are very positive and show that food bait traps do attract pest cutworm species and attract both male and female moths. The food bait traps also trap fewer moths than the pheromone-based traps, which better reflects what is happening locally. The challenge remains that these traps also attract species that are less of a concern for monitoring programs. Although the field work is complete, some additional lab trials are underway to assess the female moths. The question is, if females are mated, do they still respond to the food bait traps? If they are no longer responsive once they are mated, then populations could be underestimated at a particularly important stage of when they are about to lay eggs.

“Another student is focusing specifically on the bees in the project,” Evenden says. “The results so far are very interesting, and have shown that for some reason bees are attracted to the moth pheromone traps but not the synthetic food bait traps. In the project, we placed both pheromone and food bait traps in the field along with a neutral control trap that did not contain any test compound. There was little bee catch in the unbaited traps and no bees in the food bait traps, although some bees were captured in the pheromone traps. Yellow jacket wasps however, are attracted to the fermented sugar bait.”

Bees seem to be attracted to the moth pheromones for some reason but not the trap. “We have ramped up our investigation of bee by-catch in the prairie-wide bertha army worm pheromone trap monitoring program,” Evenden explains. “We have collected landscape and other data for the past two summers and are now analyzing the data trying to determine if trap placement in the landscape may make them more or less attractive to bumble bees, and timing of placement. We are trying to add those landscape and other variables to model trapping strategies that would reduce the by-catch of bees.”

Overall the findings are good news for industry. Food bait traps do help contribute to the knowledge of what cutworm species are where, providing a community monitoring analysis. “The benefits of the food bait traps are that they do attract both male and female moths and provide a better understanding of population densities over short distances.

The bonus is these traps do not attract bees, which is a very important finding. We want to expand the research with food bait traps to try it on other moth pests to see if the attractant works as well as it does with cutworm moths.” Final project results are projected to be available in 2018.