Sometimes it’s a good thing to come second. Dry beans are the second choice for western bean cutworm moths looking for a place to lay their eggs. They prefer corn at the pre-tassel stage, but if they can’t find that, then they’ll go to dry bean fields. So far in Ontario, this invasive pest is causing the biggest problems in corn, but western bean cutworm has the potential to be a serious pest in dry beans, as Michigan growers have found. 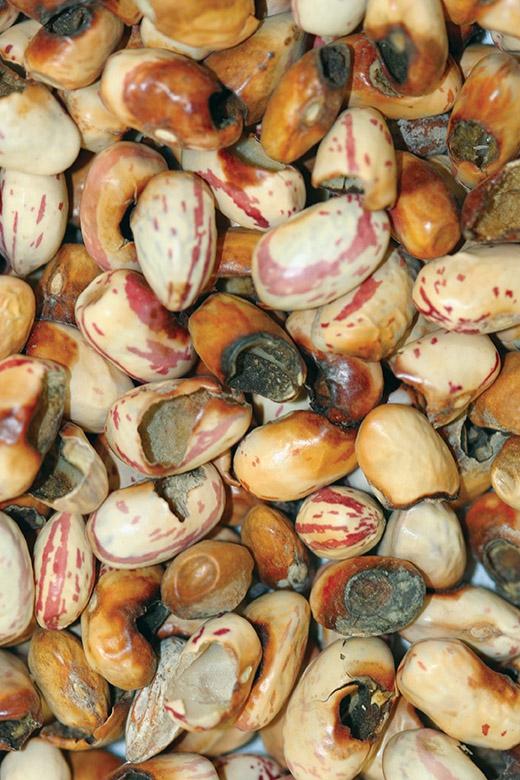 Western bean cutworm can be a serious pest in dry beans.

Compared to its attacks on corn plants, this pest is fairly sneaky in dry beans. After emerging from the soil in early summer, the adult moths lay their eggs in clusters on the underside of bean leaves hidden within the crop canopy. The tiny larvae hatch from the eggs and initially feed on the leaf around the egg mass, but they are hard to see and the leaf damage is easy to confuse with damage by other insects. The larvae soon disperse to feed on the leaves and blossoms of that bean plant and other nearby bean plants. As the larvae grow older and larger, they start feeding on the pods and seeds, chewing little round holes. The older larvae tend to feed at night or on cloudy days, and hide in the soil or crop debris at the base of the bean plant on sunny days. The larvae feed for a few weeks and then drop to the soil to overwinter.

The seed damage reduces the bean crop’s marketable yield. As well, the damage to the pods and seeds allows pathogens and other insects to enter and cause further damage.

Since 2000, this insect has been spreading east from the western U.S. across the midwest into the Great Lakes region, including Ontario and Quebec. “We’ve been monitoring this pest’s range expansion since 2006 in Ontario. We caught our first ones in 2008. It has consistently continued to expand its distribution slowly throughout Ontario since then,” says Jocelyn Smith, a research associate in field crop pest management at the University of Guelph’s Ridgetown Campus.

“Almost year-over-year, we have found new areas throughout the province where we detect the moths during the flight period. The economic injury also keeps expanding in Ontario a little year-over-year in corn and in dry beans. We haven’t had too many issues with dry beans, but as of 2015 and 2016 we’re seeing it starting up there as well.”

“Damage by this pest in dry beans has been gradually going up in Ontario, but it is still very low and very sporadic,” says Chris Gillard, an associate professor at the University of Guelph-Ridgetown. His research focuses on dry bean agronomy and pest management. “I have been in dry bean fields where about five to seven per cent of the pods have a hole in them. When you split that pod open, you find one, or occasionally two, beans affected out of the six or seven beans in that pod. I’ve heard of damage levels [in 2016] of 10 per cent of the pods with holes and two beans out of six or seven affected.”

Western bean cutworm overwinters most successfully in areas with sandy soils, so those areas tend to have larger populations. For example, in Michigan, the worst areas for dry bean damage are pockets in several counties where corn and dry beans are grown together and soils are sandy, explains Christina DiFonzo, a field crop entomologist at Michigan State University.

For example, an extension publication from the University of Nebraska–Lincoln states the risk of significant damage from the pest in dry beans is low when the cumulative catch at the peak of the moth flight is fewer than 700 per trap, moderate when the number is between 700 and 1,000, and high if the count exceeds 1,000 moths per trap. “But once the pest got into our region, perhaps because we have higher humidity and higher survival, the damage in corn and dry beans occurs at much lower numbers of moths,” DiFonzo says. “When about 150 or so moths are captured, then typically Michigan bean growers will spray.”

Her group has also been evaluating insecticide application options. “In dry beans, we compared one well-timed spray with a ‘super’ treatment where we sprayed about three or four weeks in a row, which would be utterly ridiculous – no grower would actually do that. We found that one well-timed spray was just as good as that super spray treatment,” she says.

They found that a pyrethroid spray directly kills larvae in the field and also gives a seven- to 14-day residual control of larvae hatching from egg masses laid after the peak trap catch. So Michigan dry bean growers usually do a single spray applied up to 18 days after the peak moth flight.

Monitoring and research in Ontario
Traps for western bean cutworm moths are spread across the corn-growing region of Ontario and into Quebec. “The trap network was originally funded as a collaborative effort with OMAFRA [Ontario Ministry of Agriculture, Food and Rural Affairs], the Ontario Bean Growers and the Grain Farmers of Ontario. That funding ended in 2013. So since 2014 we haven’t had the same level of funding behind the trapping network and it has decreased in size,” Smith says. “Western bean cutworm has been more of an issue in corn so a lot of the co-operators from the trap network continue to do trapping in their corn fields, and we’ve kept working with them but it’s on a shoestring budget.”

Interactive maps of the trap results are available on the Canadian Corn Pest Coalition website, www.cornpest.ca. “The traps are baited with a pheromone that attracts the male moth. When they come into a trap, they are killed by an insecticide strip in the trap,” Gillard says. “The moths are counted on a weekly basis to determine when the moth flight peaks. Typically, the peak in Ontario is sometime between about July 25 and August 2.”

The timing of the moths’ flight depends on the weather: the warmer it is, the earlier the moths fly. “A growing degree day model from Nebraska has been slightly modified [by the University of Minnesota] recently to take into account more of the temperatures during the overwintering period. We hope to validate that model for Ontario in the next year or so,” Smith explains.

“We don’t have a threshold for corn or beans that is related to the trap counts [in Ontario].” she says. However, trapping does indicate if the pest is in an area and when growers should start scouting to make spray decisions.

Gillard isn’t certain why the pest is causing more problems for dry bean production in Michigan than in Ontario. One possibility is that the growing conditions are somewhat different. “I don’t know if they have more of their bean production on sandier soil. [In Ontario] you don’t see a lot of dry beans planted on really sharp, light sands because they just don’t do well on droughty soils.”

One of his graduate students, Lindsey Goudis, conducted field and laboratory studies on western bean cutworm from 2011 to 2013. Part of this research involved examining the efficacy of various insecticides such as Matador, Coragen and Voliam Xpress. “We didn’t have really strong pest populations so it was fairly tough to say that one product was better than another,” Gillard says.

Goudis compared egg-laying locations and didn’t find any differences between the different market classes of dry beans. As well, she compared the pest’s response to feeding on navy bean, kidney bean and adzuki bean plants. Gillard says, “She fed them leaf, flower and pod tissue and that is all they got to eat. The larvae fed and grew a little better on kidney bean tissue than on navy bean. They did the poorest on adzuki bean. That was a bit contrary to some anecdotal evidence from industry indicating that they were seeing more damage in adzuki bean than other beans.” In Michigan, bigger seeded types of dry beans tend to have more problems with the pest.

Gillard’s group hasn’t done any further work on western bean cutworm since Goudis wrapped up her studies. “I’m not going to pursue more research on it until I see the need for it from a commercial production point of view and until we have more questions that we need answered,” he says.

“If you see any western bean cutworm pod feeding, start measuring that,” Gillard says. He advises growers check their fields about once a week. “Once you get to two to three per cent of seed impacted, it is time to spray. And the critical window for spraying is four to 20 days out from peak moth flight.” Currently in Canada, Matador or Silencer (lambda-cyhalothrin) and Coragen (chlorantraniliprole) are registered for control of western bean cutworm in dry beans.

“I suspect five years from now we will be spraying dry bean fields in Ontario for western bean cutworm,” Gillard says. “The problem is getting a little worse every year so we’re going to have to be that much more diligent in walking dry bean fields in the first couple of weeks of August, looking for symptoms of damage and staying on top of it so it doesn’t get out of hand.”

To stay on top of western bean cutworm problems, you may want to set up pheromone traps in your bean fields. Smith notes, “Because we have seen an increase in damage in dry beans last year and this year, we are looking for more co-operators who have dry beans to participate in the trapping network in 2017.”