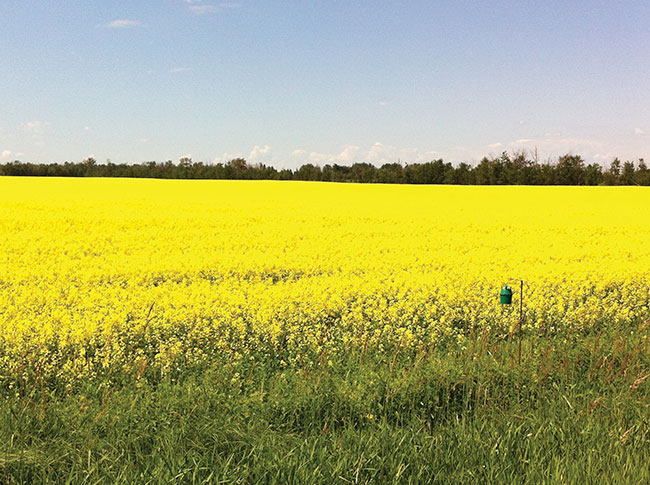 Cutworms can be serious pests in a broad range of crops across the Prairies, with population outbreaks leading to crop destruction. However, tools for monitoring cutworm populations are still being developed. Over the past few years, various graduate student projects in Maya Evenden’s lab at the University of Alberta have been focused on increasing the understanding of crop-pest interaction and the moth community structure in prairie eco-systems of both cutworm and bertha armyworm.

“One of the recent projects focused on developing tools for monitoring cutworms in prairie crops including a comparison of conventional monitoring tools of sex pheromone baited traps with newer food-bait lures,” explains Evenden, a professor and researcher. “The two main approaches of this research included investigating the chemical ecology of adult feeding behavior and testing the effect of host plant species and plant nutrition on larval performance and feeding preference for two common cutworm pest species. We know from the literature and previous experience of amateur entomologists and naturalists that sugar fermentation products have been used as food-bait lures, however they had never been tested in prairie field crops. We set out to learn more about the feeding behavior and chemical cues or attractants of adult cutworms and to develop a semiochemical-based monitoring tool.”

One of the challenges of using pheromone traps is they are very specific to one moth species and they only attract males, which doesn’t often reflect the actual population in the field. This also does not provide any indication of the more important female egg-laying population. The cutworm family Noctuidae is also a very large family, with only a few species of concern to agriculture crops. Pheromone traps can also attract moths from quite a large distance, so total numbers may not reflect what is in an individual field. For example, a very high trap catch doesn’t necessarily mean that a field will experience a severe infestation.

“On the other hand, food bait traps attract both males and females, but from a wider range of species,” Evenden says. “Although this gives a better understanding of biodiversity in a field, the challenge is being able to identify and tell the various species apart, making this approach mostly suited for experienced entomologists. Another benefit of food bait traps is they provide a better localized assessment of what is in a field as they don’t attract moths from such a long distance. In the experiments, a number of different semiochemical formulation products were tested separately and in combination, and at different release rates. The result was the development of a semiochemical-based food bait tool that can be used for field study. The food bait traps are useful for both pest management and from the biodiversity monitoring perspective. They can be used for biodiversity monitoring to provide a much better understanding of the insect community in an area and what might be impacted by agriculture.”

A second component of the project tried to answer the question of whether or not cutworms are crop generalist species as generally assumed, and how well larvae do on different types of crops. Feeding assays were conducted in the lab and included redbacked cutworm, pale western cutworm, true armyworm and bertha armyworm. The trials compared wheat and canola crops, in both fertilized and unfertilized trials. Larvae crop preference, as well as feeding data on weight gain and other metrics, were collected. 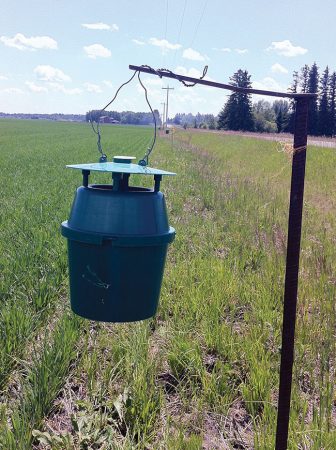 “There were some interesting findings from the study, showing for the first-time evidence of a host crop preference, and that cutworms are not necessarily generalists as previously assumed,” Evenden explains. “With fertilized crops, the cutworm larvae did not show a preference and fed equally on wheat and canola. Fertilization also increased the susceptibility of the crop to larval feeding. However, the study showed that with unfertilized crops, the redbacked cutworms preferred to feed and did better on canola, while pale western cutworm preferred to feed and did better on wheat. These findings could have implications for cultural management of those cutworms because lower levels of fertilization could lead to a less healthy cutworm population. However, we did not look at the impact on crop yield – something that producers of course would be interested in.”

Building on this research work, another graduate study project was conducted taking a closer look at moth bait trapping and the impact on bumblebees. “One of the known problems of moth-pheromone baited traps is they also attract bees, and bumblebees in particular,” Evenden notes. “In the Peace region, typically only one pheromone trap instead of the recommended two traps is used to monitor Bertha armyworm in order to reduce pollinator bycatch, which seems to be a bigger problem in this area. A comparison of pheromone-baited traps and food bait traps placed in the same field showed that bees were not attracted to the food bait traps. However, depending on the year, between 11 and 16 different species of bumblebees were caught in the pheromone bait traps, with the majority being one species, Bombus rufocinctus.”

Some of these bees were captured and brought into the lab to measure their response to various pheromone trapping compounds, because it was unclear why these distantly related insects would be orienting to a moth pheromone. Surprisingly, researchers discovered that the bee antennae do actually have receptors for these compounds or closely related compounds. Although it is still unclear why, the results show that this species of bee in particular is being attracted to the moth pheromones, it is not an accidental bycatch.

“One of the other things we looked at were landscape variables around the traps,” Evenden adds. “For example, more forested habitat around the trapping site would result in higher catch of B. rufocinctus bees. This may be why areas like the Peace region are having more challenges with bee bycatch because they have by far the most forested landscape. From the study, we were able to define some variables that seem to be contributing to bee bycatch, which will hopefully help with trap placement at various field sites. Strategies to reduce bee and pollinator bycatch remains an important priority.”

The trap comparison project and food-bait lure method have been completed and publications are expected to be released this summer. The field work has been completed on the bee bycatch study, and final results will be published later in the year. “We have made some positive steps forward in the development of an integrated pest management strategy for cutworms,” Evenden says. “Cutworms are a very large and difficult group of insects to work with, they are very strong fliers, are not very host specific and move all over the place. As well, the damage by some species occurs before they are at the moth stage, which is when we are able to monitor populations with semiochemical-baited traps. Our research has resulted in some new information and the development of a new food-bait trapping method that will contribute to both pest management and biodiversity management strategies.”