The Cellulosic Sugar Producers Co-operative (CSPC) and its partners have almost finished putting all the pieces in place for a southern Ontario value chain to turn crop residues into sugars. Those pieces include a feasibility study, a technical-economic assessment and a collaboratively developed business plan. Some important steps still have to be completed, but they are aiming for processing to start in 2018. 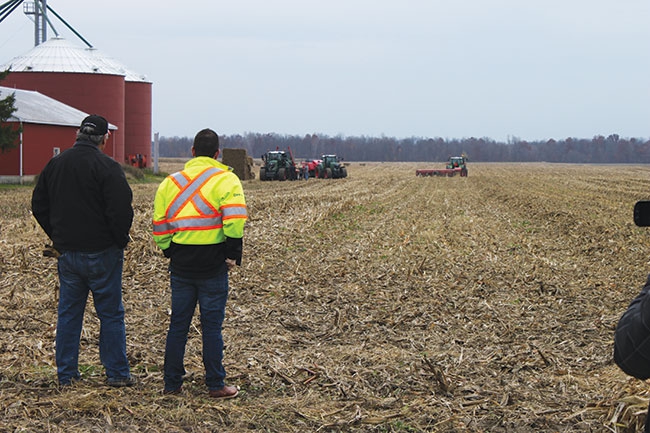 A co-op in the Sarnia region is collaborating on a value-added opportunity to turn corn stover and wheat straw into sugars. The Cellulosic Sugar Producers Co-operative (CSPC)

Dave Park, who is now CSPC’s president, got interested in the idea in 2014 after he and some other farmers in the Sarnia region were invited to a meeting about it. The meeting was set up by Bioindustrial Innovation Canada (BIC), a not-for-profit business accelerator centred in Sarnia, and AGRIS Co-operative Ltd., a farm supply and grain merchandising co-op in southwestern Ontario.

“Bioindustrial Innovation Canada wanted to do a study analyzing different conversion technologies to turn cellulosic materials – corn stover and wheat straw – into sugars,” Park says. “They had put a proposal together for this study that brought together all the players in the value chain – including suppliers and end-users of cellulosic sugars, technology providers, government agencies, commodity organizations – and they wanted to get a group of farmers together to help with this project.”

Park and a few other innovative farmers at the meeting thought this could be a good value-added opportunity for their crops, so they decided to start CSPC and participate in the study.

The co-op and its collaborators have put in a lot of work during the past two years, but the venture actually had its beginnings several years earlier.

“Bioindustrial Innovation Canada started this venture,” explains Sandy Marshall, BIC’s current executive director and a former chair of its board. “BIC focuses on helping sustainable chemistry technologies and helping them get commercialized. A number of years ago we worked to get BioAmber to select Sarnia as the location for their first commercial plant, over about 100 other sites in the United States. BioAmber needs sugars as the raw material for their [biochemical] plant, and they currently use corn sugars from a wet mill [a type of corn processing] in London, Ont. But as BIC looked at what BioAmber was doing and where this whole bioeconomy was going, we realized that having the feedstocks was going to be critical to developing this bioeconomy cluster in the Sarnia-Lambton area.”

So, about four years ago, BIC initiated a study to assess the feasibility of producing sugars from cellulosic materials, like corn stalks. The study received financial and in-kind support from industry, government and not-for-profit agencies.

The University of Guelph researchers who conducted the study found potential for the opportunity in southwestern Ontario, with the possibility to benefit both corn producers and bioprocessing companies. The researchers recommended a bioprocessing co-op as the business model, where corn stover producers would share in the returns of the processing plant.

The next step was the techno-economic assessment of the different conversion technologies, which was sponsored by the Agricultural Adaptation Council. At that time, Marshall was hired as an independent consultant to work on the study. “We looked at 19 different sugar conversion technologies. Ultimately we made recommendations to the co-op of the ones we thought might be suitable for them,” Marshall says.

Park notes, “BIC tested the technologies versus the specs and requirements that the end-users were looking for, and they did some economic analyses to make sure the conversion costs made sense. They also garnered feedback from us on whether we could meet the specs for raw materials.”

CSPC decided to work with Comet Biorefining, based in London, Ont. This company has developed a novel process to convert cellulosic biomass into sugars that can be used in the manufacture of biofuels, biochemicals and other bioproducts.

Park says one of the first things CSPC and Comet Biorefining discussed was the nature of their partnership. “We said, ‘We don’t want to be just raw material providers. We want to be part of the plant.’ And Comet said, ‘We don’t want to just buy feedstock from you. We want you to be part of the plant too.’ So it’s a real, true partnership and we share the same vision. I think when we are working together, rather than from opposite ends of the spectrum, we can extract the most value out of this partnership.”

In March 2016, CSPC and Comet entered into a memorandum of understanding to collaborate on the development of a sustainable agricultural biomass supply chain. In April 2016, Comet signed an agreement with BioAmber to supply sugars to BioAmber from Comet’s planned processing facility, to be built in Sarnia by 2018.

In October 2016, CSPC launched its equity campaign, aimed at getting farmers in the Sarnia region to join the co-op and invest in the sugar production facility. Along with hosting field demonstrations to show how the stover harvesting works, the campaign includes holding public information meetings and talking to individual farmers.

Potential benefits
Park sees several important benefits for participating farmers. “We can increase our revenues per acre from the sale of the stover and straw and from the proceeds from the sugar that we’ll get when the sugar produced by the plant is sold. We’ll also be able to get back to utilizing more no-till on our land.”

He explains, “We’re finding on our farm that no-tilling into increasingly heavy crop residue has become more and more difficult as the years have passed. Corn yields have been increasing. Hybrids are being bred for better stalk strength and standability so the stalks take longer to break down. We are planting in narrower row widths than we did 10 years ago. We’re increasing our plant populations. We’re also utilizing fungicides so the plants live healthier, longer.”

With all that residue cover, Park has had to “stop, chop and plough and then cultivate the field to get it prepared for planting soybeans.”

He notes, “By having the co-op remove a portion of the stover, we’ll reduce our need for tillage, reduce our fuel costs and have less soil disturbance. Also, our soils will warm quicker in the spring, allowing timelier planting of our soybeans. Timely soybean planting results in quicker emergence and quite often with quicker emergence you get better soybean yields and more consistent stands. We’ll also be able to cut our soybean seeding rates back from some of the heavier populations we utilize when we’re no-tilling into that heavy mat of stover that is left traditionally.”

According to Marshall, the value chain will also help sugar bioprocessors and the local bioeconomy. “The companies need sources of raw materials. They can continue to use traditional corn sugars, but there are only a couple of wet mills around here. We see the opportunity to provide a lot more feedstocks for these companies, to allow them to come here, set up and create jobs.”

“A lot of these companies are also looking for non-food-based sugars. When you make sugars from things like corn stover and wheat straw, you get away from a discussion about food-based sugars for industrial applications,” he says. “Also, when you use wheat straw, you’re getting into the discussion that wheat straw is non-GMO, and in some areas of the world, that is an important consideration. So for the companies, it is about having diverse feedstocks and access to feedstocks.”

A co-op in the Sarnia region is collaborating on a value-added opportunity to turn corn stover and wheat straw into sugars.

Producer participation
CSPC’s business development manager, Jay Cunningham, is the primary contact for producers who are considering this opportunity. “CSPC is a closed farmer-owned co-op, so the farmer would need to be a producer of corn stover and/or wheat straw. The idea is that the farmers will provide the biomass for the production facility through the co-op, and they will own part of the production facility. They’ll be paid for their biomass and then they’ll also receive a return on their investment in the plant,” Cunningham says.

“The facility requires approximately 75,000 metric tonnes of biomass a year, so we’re looking for approximately 55,000 acres. I am hoping to contact, meet, talk and discuss whatever needs to happen, with anyone interested in joining the co-op and participating in the supply of stover for the new facility.”

CSPC is currently focusing on farmers within 100 kilometres of Sarnia. “If you’re really close to the border of that 100-kilometre radius, we’ll work with you, but we have to set some boundaries because of transportation costs,” Cunningham says.

The co-op will look after all of the crop residue harvesting, aggregation and transportation to the Comet facility, ensuring the facility will get consistent feedstock.

Because crop residue protects soil from erosion and provides nutrients and organic matter to the soil, the co-op also wants to be sure participating farmers will retain sufficient residue. Park says, “We’re only going to remove about 30 per cent of the stover. And we’re not promoting or suggesting removal of stover from any corn field yielding under 150 bushels per acre. When yields are over 150, you’re left with a considerable amount of stover.”

He adds, “We’re able to set the flail choppers at the desired height to ensure we leave the desired residue that a farmer wants left on the land. We’re also not suggesting that farmers sign up 100 per cent of their acres for residue removal, so they can utilize crop rotations and not be removing stover from the same land year after year. And utilization of cover crops is also going to be a best management practice that farmers can follow to ensure they are keeping adequate organic soil carbon levels in their fields.”

“It’s an opportunity for producers to capitalize on a crop without diminishing the natural resources that are there,”

Cunningham says. “We won’t go into a field unless we have the permission of the farmer. When a farmer is completing grain harvesting of a field that he would like to have the biomass harvested from, he will contact his CSPC field representative, who will then schedule a crew to harvest the biomass.”

According to Cunningham, the residue will be left in a field for no more than four months. “Some will be trucked right away, some will get trucked within a month or two, and some may take the full four months.”

Over the next year, along with conducting the equity campaign, the co-op will be confirming their protocols for handling the stover and straw and purchasing the necessary equipment.