Two years ago, an unusually warm, dry, long fall across much of Ontario meant that wheat grew unusually big before winter freeze-up. Strong fall growth brings with it both pros and cons. While vigorous early growth can ultimately produce high yields, it also leaves plants susceptible to lodging. 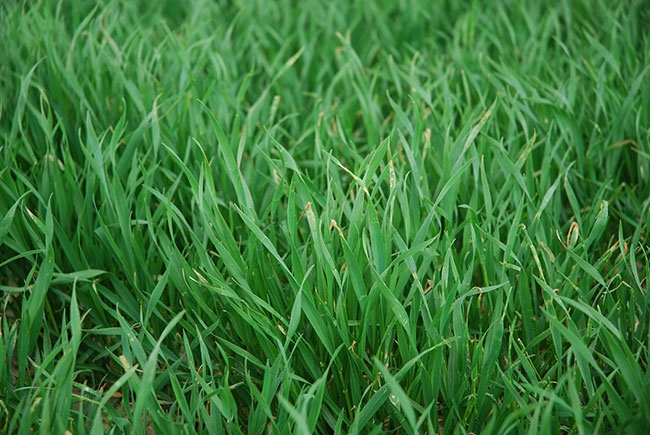 Regardless of nitrogen management strategy Two years ago

In response to this, Real Agriculture agronomist, Peter Johnson and technician Shane McClure began a research trial last year to determine what factors might reduce lodging and maximize yield in early planted wheat that contained more than four tillers per plant.

“For years, we’ve promoted early planting of wheat as the easiest management tool a grower has to achieve higher yields,” Johnson says. “In 2015, we hit a situation where many growers took advantage of the opportunity to plant early, and then we had one of the longest and most open falls we’ve ever had. It was January 7th before the crop finally shut down. We had wheat that was thick as the hair on a dog’s back, some had 10 or even 12 tillers per plant. So, the big question was: ‘How do we manage the crop so it doesn’t all fall over?’ That’s where this project jumped from.”

Researchers began their study in the U.K. and New Zealand, with international consultants suggesting the best way to achieve maximum harvestable yield was via nitrogen management. By delaying nitrogen application, weaker tillers should “starve off,” maintaining the majority of yield potential but minimizing lodging. In fact, delayed nitrogen application should have even more impact than a plant growth regulator, which Canadian farmers have limited access to.

Johnson and his team tested various nitrogen strategies in seven sites in Ontario through 2016 and four sites in 2017. In each of the two years, growing degree days (GDD) the fall previous were unusually high. At the Seaforth site, GDD accumulation between planting and freeze-up reached 882 in 2015 and 848 in 2016, well above the longer-term average of 694 GDD at that location. The warm weather in both years resulted in plants in all plots reaching at least four tillers in the fall, setting them up for high yield potential and high lodging risk.

“By almost anyone’s standards, holding off on nitrogen until the second node stage and seeing it go extremely yellow in the spring is definitely a bit disconcerting,” Johnson says. “A lot of growers will buy into a split nitrogen application. But, very few will look at a duck foot yellow wheat crop and be able to wait. We didn’t feel very comfortable with it either but that’s why we do the plots. We’ll take on the pain of learning so growers don’t have to. When you do research, you have to go outside the box to investigate all the possibilities.”

The fact that delayed nitrogen application reduced tillers only marginally did not impact lodging in 2016, since cool, dry conditions in the spring and summer of 2016 naturally minimized lodging. This year, however, cloudy, wet conditions made for a much more lodge-prone crop. From a lodging management perspective, Johnson advises reducing seeding rate when planting early, and applying a split nitrogen application in spring.

“Usually growers put two-thirds or three-quarters of their nitrogen on early and then come back for the final portion. In a lodging prone crop, I’d go with a small shot upfront at green-up, probably mid-April around growth stage 30. For the second application, go in at growth stage 32 or even a later. In some cases, you could go as late as growth stage 45 (boot stage).”

2016 chalked up phenomenal wheat yields regardless of nitrogen management strategy and despite just half the normal rainfall in May through July. Fields treated with a delayed nitrogen application produced as much yield – an average of approximately 101 bushels per acre (bu/ac) – as fields treated more conventionally.

“When you see wheat as yellow as your phone book because you’ve held off on all nitrogen, it’s hard to believe that you wouldn’t have reduced yield. But, in six of the seven 2016 plots, a late application did not reduce yield at all. In fact, in two of the plots, the late application was not statistically significantly different, but it was numerically higher than the other plots,” Johnson says.

Results from 2017 showed the value of delayed nitrogen application much greater than in 2016. With ample moisture and a lack of sunny days through April and much of May, stems grew tall and thin.

Lodging was the number one problem in the 2017 crop. Split or late N (nitrogen) applications improved lodging and maintained or increased yield at three of four locations. Yields, with early planting in the fall of 2016, were the second highest on record in 2017, only beaten by the record crop of 2016.

One truly intriguing finding from 2017 was that big wheat clipped in the fall of 2016 remained standing much better than wheat that was not clipped. While this is only one year’s data and conducted on very few sites, it was an interesting outcome. Johnson says that more research  should be undertaken on this technique.

In terms of protein, fields that received a split application of nitrogen fared significantly better in 2016. Results have not yet been tabulated for 2017 protein levels.

Looking forward
Johnson hopes to continue the study into 2018 and, would like to expand to study nutrient uptake in early planted, very high yielding, “big wheat.” So far, much research has been done on nutrient consumption of 40 to 60 bu/ac crops. Johnson’s sites target yields at 130 bu/ac or more.

“There’s been good work done on 300 bu/ac corn that shows it doesn’t take up twice as many nutrients as a 150 bushel crop – it takes up nine times as much nitrogen and seven times as much potash,” he says. “150-bushel wheat is my next goal. To get there, we’ll have to really figure out what wheat needs in nutrient uptake and how we can get that into the soil in a way that the crop can take enough up.”