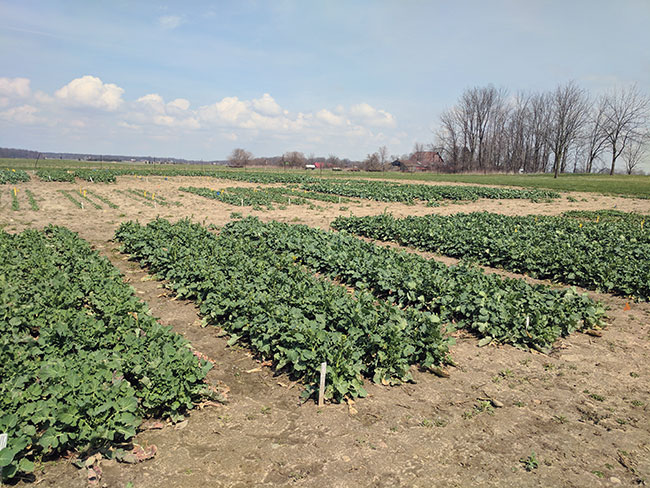 This photo, taken on April 12, 2017, shows seeding date plots. In the foreground are plots with an ideal seeding date in early September; behind these plots are treatments that were seeded in late September or early October. This shows the range of plant development based on seeding date. All photos courtesy of Eric Page.

A new study suggests producers should plant winter canola in the first two weeks of September to minimize winterkill and maximize yield and oil quality.

There’s just one winter canola variety available in Canada: Mercedes, a winter hybrid cultivar from DL Seeds. Since its full nationwide registration in April 2020, Page says demand has outstripped supply. Approximately 10,000 acres were planted in Ontario in 2021. That’s a dramatic increase from the acres planted by the two or three early adopters who first started importing seed from a U.S. seed company in 2015 and 2016, he says.

Even though winter canola acreage is growing in Ontario, the perception that winters are too cold for the crop is still the biggest barrier to adoption. But Page says it’s the number of growing degree days (GDDs) before the first frost that counts.

“Our winters generally are not too hard here – there’s no big snow pack, the temperatures don’t go below -20 C, so overwinter survival, which is often the major barrier to considering winter canola when I speak to farmers, [is less of an issue],” he says. “We have the most growing degree days in Canada, on par with California.”

Farmers have successfully grown winter canola in Wellington County, north of Guelph, he says, but the target area is probably south of Toronto. 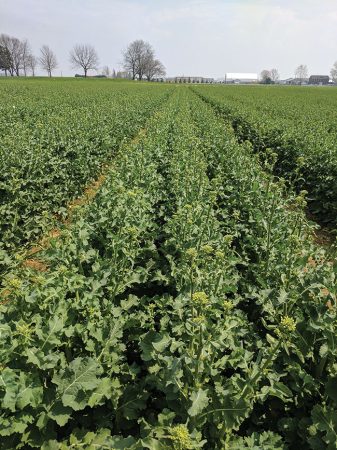 This photo, taken on April 20, 2017, shows a field of Inspiration; the photo highlights how quickly winter canola transitions to reproduction in the spring. The floral clusters are visible in the photo.

Study design and results
The study trials ran between 2016 and 2018 at the AAFC Harrow Research and Development Centre in Harrow, Ont.

The plots were seeded at the recommended rate for winter canola in Ontario – 75 to 130 plants per square metre – and germination exceeded 90 per cent in all years of the study.

The Harrow researchers found that seeding date didn’t influence autumn emergence. However, in general, they found winterkill was less than 40 per cent for September seeding dates, but jumped to between 60 and 80 per cent when seeding was delayed into October.

“Across the three hybrids examined, winter canola seeding dates that facilitated the accumulation of greater than 600 GDD before the first hard frost of autumn tended to have less than 20 per cent stand reduction from winterkill,” the research team wrote in a publication on the study results.

Across all three hybrids, yields, too, were highest when the crop was planted in early September.

When it comes to oil quality, the earlier seeding dates also improved results. Two of the major downgrading factors for canola oil quality are green seeds and “heated,” or crushed and darkened, seeds; another factor is high chlorophyll levels which, like heated seeds, negatively affects taste.

The study found that the later the seeding date, the greater the percentage of green or heated seeds. They note that high chlorophyll levels and free fatty acid content also increased with later planting.

“The unintended consequence of delayed seeding is that you’ll have a delay in maturation in parts of the plant, you’ll have variation in the seed ripening,” Page explains. “There’s always variation, but [later seeding] increases it and you get more green seed and that will result in oil quality changes.”

Variation can cause holes in the stand and branching, which is associated with delayed maturity, which makes it difficult for farmers to time desiccation, Page says.

“If you want to try winter canola, you have to set yourself up at the start to avoid headaches down the line. Get your planting date set and go from there, weather permitting.”

Winter canola resources and recommendations
Winter canola might be a relatively new addition to the rotation in Ontario, but there are a wealth of agronomic resources for producers.

Page says there are 13 winter canola hybrids in trials in southern Ontario; Mercedes performed best in terms of winter hardiness in 2018/2019 and 2020/2021, and was among the top performers in terms of yield. Results from trials are published on the Ontario Canola Growers website.

Page says producers should “set themselves up for success” by following a winter cereal, and taking an exceedingly cautious approach to herbicide residues. Winter canola seed is treated but has no herbicide tolerance.

“What you apply in cereals can have a significant impact on the survival of winter canola,” Page explains. “Talk to an agronomist, get into some literature or speak to an extension educator to plan your herbicide program in the preceding crop. Anything from Group 2 can cause winter canola serious problems.”

Another thing to bear in mind is the need for residue management, he says, to ensure straw is spread evenly and canola seedlings can emerge.