As growers pencil out the costs of production, lowering canola seeding rates may look tempting as a measure to reduce costs, but the benefits will rarely outweigh the risks. Factoring in the costs of the added risks, the practice may actually result in increasing costs and lowering yield, rather than improving the economics.

“Selecting the seeding rate ultimately depends on achieving the recommended plant stand at harvest, which is between seven and 10 plants per square foot,” says Shawn Senko, agronomy specialist with the Canola Council of Canada (CCC) in east-central Saskatchewan. “Whatever seeding rate you select, the key is to end up with the proper plant stand, reduce plant mortality and maximize yield at harvest.”

Ensuring the establishment of a proper plant stand using best agronomic practices sets the crop up for the season.

Another consideration is seed size: many varieties are much larger than they used to be. Canola thousand seed weight (TSW) can range in size from less than three grams per 1000 seeds to six grams or more. This seed size variation can have a dramatic effect on seeding rate, and growers need to adjust their seeding rate accordingly to seed the same number of seeds per acre.

“We have gone from varieties with 3 to 3.5 grams per 1000 seeds to many hybrids today which are six to seven grams per 1000 seeds,” says Sekulic. “At the same time seeding rate recommendations, which were eight or nine pounds per acre in the 1980s, are about five pounds per acre today. So we have essentially halved our seeding rate recommendations but doubled the weight of the seeds. Using an average of six grams per 1000 seeds and an average emergence of 40 percent, which is fairly standard on the Prairies, we are setting ourselves up for four plants/square foot, which is at the extremely lower end of what we need. To get the maximum yield potential out of your seed investment, you want to make sure you have calculated the right seeding rate.”

Using good agronomic practices, such as seeding shallow and seeding at slow enough speeds to ensure a uniform depth of one-half inch, can help ensure good stand establishment and seedling survival. Sekulic explains that every increase in depth by one-half inch results in a loss of about one-quarter of the plant stand. Seeding at slower speeds and at a depth that is shallow enough to be conducive to higher rates of emergence is key to optimizing yield and lowering costs. Canola is also very sensitive to seed-placed fertilizer, and slow seeding speeds also help to maintain good seed and fertilizer separation.

Other risks associated with cutting seeding rates include crop variability and extended flowering periods. Thinner plants stands increase the risk of weed competition, insects and diseases such as sclerotinia, which can increase input costs for management and control. “Fewer plants usually result in increased branching, uneven maturity and extended harvest,” says Sekulic. “It can be difficult to stage the crop because the main stem will usually be ripe and ready to cut, while the side branches are still green and a few days from being ready.” This harvest variability increases the risk of frost, higher green seed count and yield losses.

There are many factors to consider and higher risks for cutting back on seeding rates. “There is a tradeoff to cutting back on seeding rates, as you still have to achieve the target plant stand by making sure seedling mortality is lower so more of the seed is surviving,” says Senko. “That may mean improving seeding precision, seeding to the right soil temperature and getting all of the other agronomic practices right.”

Growers should check emergence and resulting plant stands every year to know whether or not they are achieving recommended plant stands. An unexpected frost, poor weather conditions, seeding issues or pest problems can quickly translate into seedling mortality and lower than targeted plant stands.

“Until we know that precision planting techniques are mastered and translated into lower seedling mortality rates and really good seedling survival, cutting back on seeding rates is still a risky venture,” says Senko. “If you don’t get a good start with the proper plant stand, then it makes the whole growing season tougher.” 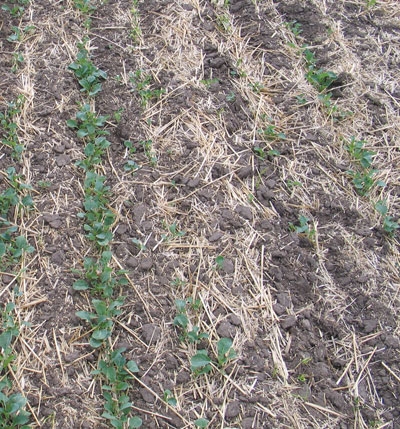