In 2012, for the sixth year in a row, the Prairies had a record number of acres seeded to canola – 21 million acres, according to Statistics Canada. Recent analyses of Prairie crop insurance data indicates the extra canola acreage has come from tightening of canola rotations in traditional canola growing areas. In many regions, a one-in-two-year canola rotation is now the most common choice, and canola-on-canola is becoming more prevalent too.

Canola is also being grown in non-traditional areas, especially in the Brown and Dark Brown soil zones. “Over the last few years, those regions have been receiving pretty reasonable growing season precipitation and in some cases they have produced some of the better yields,” says Derwyn Hammond, crop production resource manager with the Canola Council of Canada. “For instance, in Saskatchewan for the past two years, some of the more traditional canola areas have had challenges with excess moisture, while the southwest was a bright spot in terms of yield. We’ve also seen added acres from some longer-term forage or marginal land going out of a livestock-focus and into growing grain, especially in years with softer livestock prices and stronger grain prices.”

Shorter rotations call for growers to increase their focus on several factors that can have important yield impacts. Hammond notes that analyses of data from Prairie crop insurance and rotational studies indicate a yield penalty of about 10 to 20 percent with canola-on-canola.

Short rotations also increase the risk of various diseases, weeds and insects. One key canola disease where a tighter rotation is most apt to have an impact is blackleg. “Blackleg is present in most fields, and growing the resistant genetics for managing the disease more frequently means greater selection pressure for races that are more virulent against that resistance,” says Hammond. “Also, if your resistance does start to erode leading to higher blackleg levels, you need to allow enough time for the diseased residue to break down prior to the next canola crop. In tighter rotations often there isn’t enough time for that to happen.”

Another disease to watch for is clubroot, which is prevalent in Alberta. “Once clubroot is introduced into a field, a higher frequency of the host crop in the rotation allows the levels of resting spores to build up in the soil over a shorter number of years and to reach the high levels that cause devastating outbreaks at a field level,” notes Hammond.

There are some insects to look out for as well. Hammond says research shows that, particularly with back-to-back canola, you can see a significant increase in root maggot damage. Also, with the host crop deployed over a larger portion of the landscape, they’re seeing increases in certain insect pests like cutworms as more species adapt to canola as a host crop.

When Hammond first started with the Canola Council, just two cutworm species were on the radar; now the list includes five or six species damaging canola crops in some years.

A key issue for herbicide-tolerant canola systems is the risk of herbicide-resistant weeds. Hammond offers some scouting tips: “Watch for any shifts in the weed spectrum in your field. A shift is not always caused by resistance; sometimes it’s just a shift to weeds better able to withstand that chemistry. Also, watch for any escapes and any patterns of those escapes that might suggest resistance is developing.”

Herbicide residues are another consideration. “If growers are anticipating changing the frequency of any crop in their rotation, they need to be aware of any potential herbicide residue problems and plan for them.”

As to fertility management, canola has relatively high needs for sulphur and nitrogen. Keeping a special eye on those nutrients in tight rotations will help ensure the crop’s nutrient needs are met.

In the non-traditional areas, growers may have some slightly different considerations. For instance, certain diseases might be less of an issue. “In the Brown and Dark Brown soil zones, with the drier conditions and the lower relative humidities, some disease issues can be less prevalent,” says Hammond. “However, we have seen in the last couple of years when moisture conditions are above normal in those areas, sclerotinia issues can pop up.”

As for weeds, in drier areas that are not quite as favourable for canola growth, you may not get as lush a crop canopy to compete with weeds. “So you may be relying a little more heavily on the effectiveness of herbicide chemistries,” he says.

“Also, don’t scrimp too much on seeding rates because you need an adequate plant population to give the best canopy cover possible.”

In the Brown and Dark Brown soil zones, kochia comes to mind as a bit of a challenge for growers, with the finding of glyphosate-resistant kochia and the prevalence of Group 2 resistance in that weed.

Despite the record seeded acres in 2012, the total Prairie canola production was down by 8.9 percent from 2011, according to Statistics Canada’s latest estimates.

“In 2012, in a lot of areas the crop got established fairly well and looked promising,” says Hammond. “Unfortunately, in many areas canola underperformed compared to the early expectations, for different reasons in different areas.” Although some areas had very good yields in 2012, the average canola yield for the Prairies was 27.6 bu/ac in 2012, compared to 34.3 bu/ac in 2011.

Hammond points out that some of the key factors contributing to low yields in 2012 aren’t things that can be managed by crop rotation changes. Weather problems, like hot, dry conditions at flowering in some locations and excessive rain or wind in other places, had a big impact on yields. And, although blackleg and clubroot were problems in some areas, other diseases, such as aster yellows, were also important concerns.

Is 21 million acres of canola sustainable?

The significant increase in canola acres in recent years raises the question of whether or not such large canola acreages are sustainable.

“At the Canola Council, we’ve talked a lot about issues related to potential demand for canola, whether we can we meet it, and how much production is sustainable,” says Hammond. “Back in 2006, we set a canola production target to meet potential demand of 15 million tonnes by 2015. We were assuming roughly 17 or 18 million acres seeded to canola with yields in the 40 bu/ac range. The genetics we have these days certainly offer the potential to reach those yield levels, but we still have some distance to go to get there.”

In his view, sustainable canola production is not really about the total number of acres in canola. It’s more about understanding the key limitations to yield in each different part of Canada and how rotations play into that as a management tool, and figuring out the effects on yield potential of a higher frequency of canola.

“The answer to that isn’t going to be the same everywhere,” notes Hammond. “It really varies depending on the spectrum of pest issues, and on considerations like rooting depth and the efficiency of utilizing nutrients and available moisture over the whole cropping sequence. We’re lacking good data on some of those bigger systems-approach questions in crop rotations, but fundamental things like moisture-use efficiency could be a huge deal for sustainability in the Brown and Dark Brown soil zones, whereas maximizing moisture uptake might be more important in wetter areas.”

What’s ahead for canola acres on the Prairies in 2013? “Our expectation is that we will almost certainly see some pullback in the acres seeded to canola in 2013, although perhaps not as steep a pullback as some people are suggesting,” says Jonathon Driedger, senior market analyst with FarmLink Marketing Solutions in Manitoba. “We’ve seen the canola rotations get pushed very hard in the last few years. Then in 2012, canola was the one crop that consistently across Western Canada was a disappointment, but for all kinds of different reasons – from too wet, to too dry, to disease, to pests, to wind and so on.

“Maybe even more important than that is the fact that [as of mid December 2012] we’re seeing pretty good potential returns looking ahead for other crops, like spring wheat and soybeans. So there’s an opportunity for growers to bring their rotations back into line a little bit, while still planting crops that are showing some reasonable returns.” 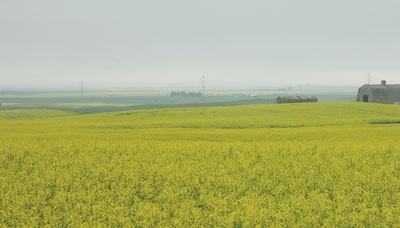 If a large proportion of the canola plants in a field show root maggot damage A record 21 million acres of canola on the Prairies in 2012 - but is it sustainable?