Features Agronomy Seeding/Planting
Judging the field by its cover

Farmers will go to war over tillage. Ask one man to put down his plow, or tell a no-tiller to pick one up, and calls for blood are sure to follow. 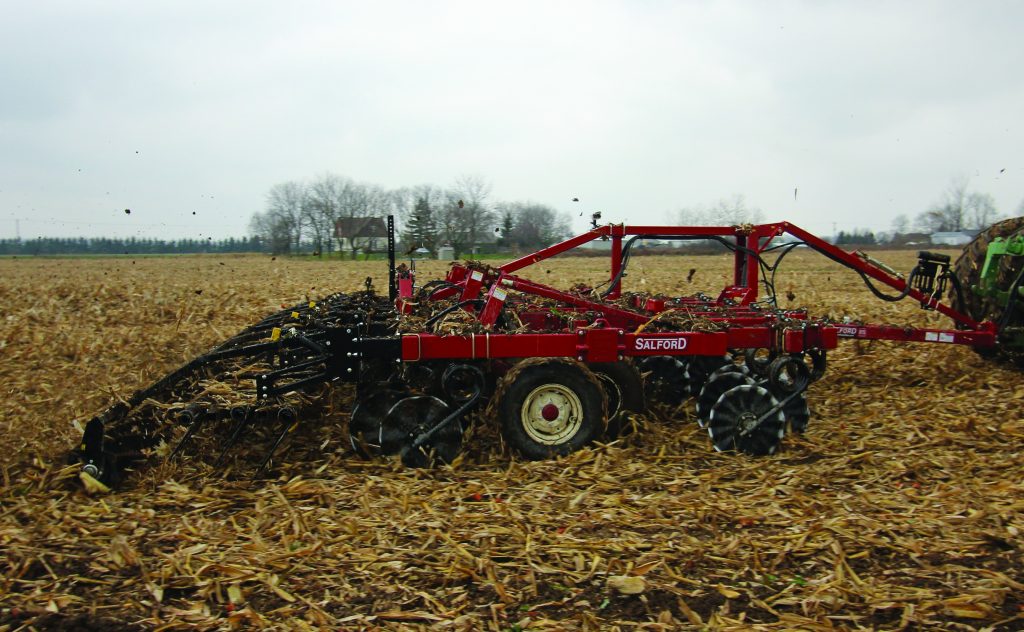 ABOVE: Coulter-style tools Farmers will go to war over tillage.

Perhaps that’s a slight exaggeration, but there’s no denying that a barb aimed at views on the act of tilling hits many farmers pretty close to the heart. Conventional and no-tillers alike have both enjoyed their golden ages, but vertical tillage technology is casting a shadow of doubt that either extreme is undeniably superior or progressive.

The goal of true vertical tillage is to get the right combination of air and moisture into topsoil at the right time of the season and doesn’t necessarily move much actual soil to do that. But at this year’s Southwest Agricultural Conference, OMAFRA’s Greg Stewart announced his favourite piece of vertical tillage equipment right now is an offset disc.

Following up on that point, Stewart says that in past trials, disc results quite often did really well compared to other tillage options. But back then, he says, they also presented a number of problems. They were a little more prone to smear, didn’t operate level, and needed to be followed in another pass with a cultivator because they didn’t come with harrows.

“The vertical tillage revolution has essentially taken the bad things of a disc and fixed them,” Stewart says. “They took a little angle off the blades so they didn’t throw as much, they made the frames heavier so they rode a little more level, and they put good sets of harrows on the back.”

Stewart says that the core message today is still the same that it was in 1972. Farmers need to create a soil environment that can produce good yields and be protected from erosion. Every tillage pass breaks down soil structure, even as material is incorporated, so whoever makes the fewest passes, wins. Science continues to prove residue cover remains key in fighting soil erosion but also in ensuring good emergence. The threat of erosion is greatest in May and good residue cover can reduce the compaction caused by rain.

But Stewart says the days when one tillage system was magically better than another system are behind us. No matter what they use, he says, farmers who don’t have the right amount of residue cover aren’t
really in the game in terms of protecting the soil.

“If you want to be progressive, the ultimate goal is 30 per cent residue cover on the ground, all the time, to protect it from wind and water erosion,” says Stewart. “I don’t care if you’re no till, conservational till, vertical till or placebo till. Use whatever tools are out to get there however you can get there.”

Mark Van Veen, one of the tillage specialists working for Salford Farm Machinery, gets excited when debating tillage philosophies and agrees that there are many different ways to prepare a seed bed correctly. He says any system can work and be environmentally friendly as well, as long as farmers give thought to what they’re doing.

“When you work dirt, you excite the system, and you break down organic matter to some degree,” he says. “The flip side of that is, usually when you’re doing some sort of tillage pass, you’re also incorporating residue and in those cases you’re speeding the system up so it’s not a total negative.”

Fighting to incorporate and manage residue is one of the big factors behind a recent trend to abandon no till for more conventional options, Van Veen theorizes. He has seen plow and secondary tillage sales go up dramatically in the last year or two. But he thinks farmers need to look for some happy mediums rather than jumping to extremes. He still thinks no till is a fantastic system if you can manage the cold wet springs and keep a density layer from forming over time, since that compaction seems to stall out the soil’s ability to digest residues. Van Veen says he personally thinks breaking that layer up could be done with cover crops or by mechanical means. But he likes the Salford’s Independent series with the I-1100 RTS for the job because the blades are individually mounted on coil springs and work
quickly by producing a jackhammer effect that reduces soil density while conditioning residue.

Van Veen says that Salford’s I-1100 RTS is an example of a tool that can be considered true vertical tillage, which can really complement a pre-existing no-till environment. Van Veen personally thinks these coulter-style tools, which move very little dirt, work with the soil rather than against it to provide an ideal seed environment.

“Vertical tools allow us to do things we haven’t been able to do in the past. Where vertical till really shines, is that you can warm up the soil, get that digestion power sped up in the spring, then get planters into the field a week ahead, giving yourself bigger yields because you’re planting earlier into ideal conditions.”

As many no-tillers are well aware, soil is already a dynamic entity, with several microbes and organisms already happily living in layers, and has a large stomach for crop residue. The less those layers are disturbed, the less you disturb those organisms. Like all tillage before it, vertical tillage helps those organisms breathe.

“Where you add a little more air, all those bacteria and other little critters just go to town and that provides an ideal environment for your seedlings as well because, contrary to popular opinion, it’s actually water vapour that makes a seed germinate,” he says. “Discs blend pretty deep into the profile and you’ve really got to know what you’re doing to do that without totally destroying the life of the soil.”

For those who want some vertical tillage but also want to see some soil move, there are hybrid implements that, again, really don’t fit into the traditional tillage divisions. One new hybrid would be Amazone’s Catros implement. It’s partly a disc but also partly a packer. Opt for a few other features and it’s even harder to label according to Sam Abourjeily, who has been the Eastern Canada sales manager with Amazone for seven years. He says true vertical tillage doesn’t perform well in wet conditions, so while a portion of the design of the Catros is vertical, the machine still works well immediately after harvest as tillage was intended. It’s quickly being adopted in Quebec and Ontario, and Abourjeily says it’s much more versatile than conventional tillage.

“By going at a 10 degree angle with your first pass in the fall, immediately after any harvest, you are maintaining your field level and are starting a faster decomposition of the residues, so that when spring arrives, you can work straight, faster and with less residues,” he said. “Your purpose for the second pass, in the spring, which would be with the same machine, is to open up the ground early in the season, warm it up faster and start planting immediately after.”
Instead of truly vertical discs, the Catros has two rows of discs slightly angled in opposite directions so that residue is processed and incorporated at the same time. The packer wedges the leftover pieces into the ground, for more soil surface contact, and helps to take advantage of a longer decomposition season. The first pass smooths field imperfections and processes residue like primary tillage, but a second 10 to 16 kilometres-per-hour shallow pass replaces secondary tillage. Abourjeily says it can further save conventional passes because it can be attached directly behind a liquid manure tank for incorporation purposes. He says it also has been turned into a seed drill, of sorts, by some farmers.

“We can propose, as a convenience option, to install on the Catros machine a small grains seeder to broadcast mixtures of grass-seeds along in the fall,” said Abourjeily. “So while you’re tilling the ground in the fall you can cover the field, with the radishes or mustards recommended by agronomists, at the same time, and hence reduce the overall needs for chemical fertilizers.”

Stewart says seeding fall cover crops all in one pass is a slick idea he could get behind. And he thinks any piece of equipment that can effectively replace a number of pieces a farmer is working with will earn attention. As far as he’s concerned, there’s considerable merit in no longer judging a field by the system it’s been ascribed to; judging the field by its cover will do.