A high-moisture year – like this year, in many parts of Ontario – can cause producers a multitude of problems, including a proliferation of weeds, increased soil erosion, potential nutrient loss, and compaction issues. But there is one management solution that can help alleviate all four: the use of cover crops. Anne Verhallen, soil management
specialist at the Ontario Ministry of Agriculture and Food, shares her knowledge on using the right cover crop for the right job. 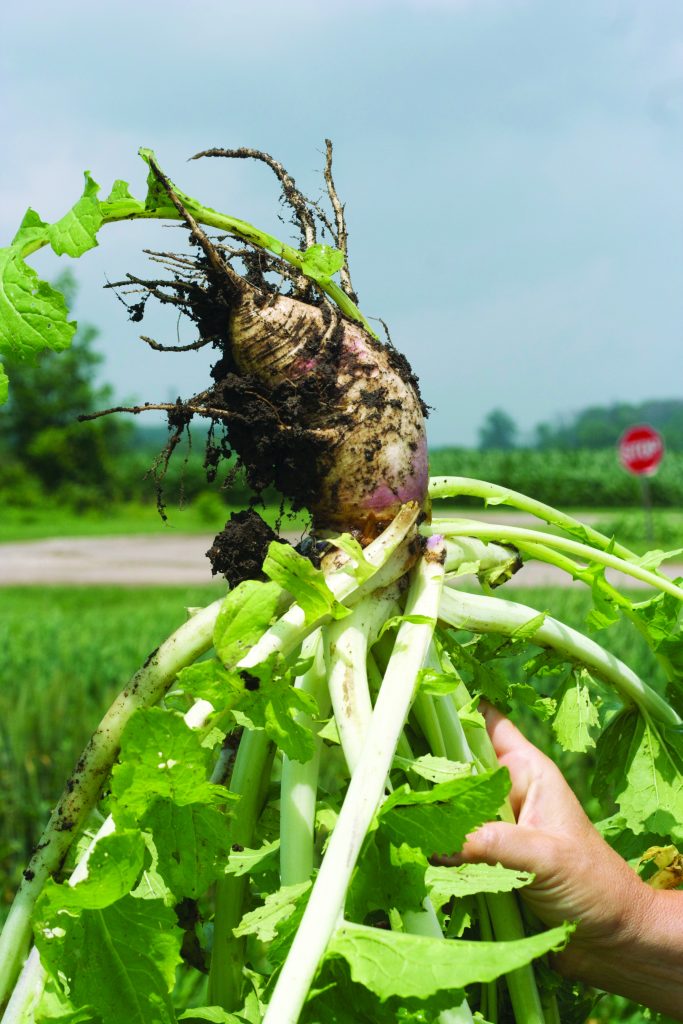 Problem: Weeds
Some cover crops have the ability to suppress weeds, likely due to shading, competition, and allelopathy, which occurs when one plant produces organic compounds that have negative effects on other plants.

“Any cover crop is going to do a decent job of suppressing weeds,” says Verhallen. “But if you’re really targeting weeds, some of the best crops are in the Brassica family.”

Members of the Brassica family, including oilseed radish, turnip and kale, are very competitive. They’re also high nitrogen feeders, so they will reduce the amount of nitrate in the soil, making it difficult for weeds to grow. Brassicas also put out massive amounts of leaf tissue, which is good for providing shade to reduce germination.

Buckwheat has traditionally been a good solution for weeds as well, says Verhallen. It’s a great choice because it has large leaves and grows rapidly. “But there are some cautions that come with buckwheat,” she says. “Because it’s a very short-season, warm-season type of cover crop, it’s not going to take a frost,” she says.

“It will also flower very quickly, and once it flowers, it’s already setting seed. It’s not very tolerant of herbicide carryover either.”

Problem: Soil erosion
According to the Midwest Cover Crops Field Guide, the classic use of cover crops has been to cover soil, protecting it from both wind and water erosion. Having live roots in the soil helps to hold it in place, thereby reducing erosion. Depending on what you’re looking for – fast cover or lasting residue – there are a number of ways to approach cover crop usage when managing for soil erosion.

“Our target for erosion control, at least in the spring, is to have at least 30 per cent ground cover through cover crop residue or previous crop residue after planting,” says Verhallen. “That 30 per cent is related to what it takes to reduce water erosion, and in particular, raindrop impact.”

For minimizing soil erosion, just about any cover crop will do. “It’s a matter of getting the ground covered,” says Verhallen. “You’ll want to choose a crop that gives you a lot of top growth, like oats, winter wheat, winter rye, and winter triticale. These crops will give you cover over the winter, as well as lasting cover come spring.”

Problem: Nutrient management
In systems that use manure or where vegetables are harvested early (sweet corn, for example), or in situations where crops don’t survive due to heavy rain, attention to nutrient management will be necessary. “You’re looking for nutrient cycling, something that will scavenge the nutrients and prevent leaching,” says Verhallen. “Generally, you’re looking for something that’s going to be a heavy feeder on nitrogen.”

Brassicas are heavy nitrogen feeders, especially radish and oats (in the fall), and rye and winter wheat come spring. “Our challenge with some of these other cover crops, like oats and radish, is that they die over winter,” says Verhallen. “They’ll die very late, and they will hold nutrients for quite a while. But they’re dying around Christmas time or early January, and we won’t have a corn plant there for months to be able to pick up those nutrients.

So we can’t give them a really great credit towards the next crop. And that’s a very unsatisfying answer for a lot of people.”

Another concern for producers is phosphorus, particularly soluble phosphorus that gets into the Great Lakes and contributes to algae blooms. “While cover crops are pretty good at nitrogen uptake, where they really shine is with the phosphorus – keeping soil intact and taking up some soluble phosphorus before it gets leached away,” says Verhallen.

Problem: Compaction
When it comes to compaction, cover crops can be used to provide channels through subsoil or to loosen topsoil. They also provide additional food for soil fauna such as earthworms. Any cover crop will add some improvement to the soil structure in the top six inches. To really punch holes in the compacted areas, though, you ideally need a more established root, something like sweet clover or alfalfa.

“If you’re trying to go below that,” says Verhallen, “then you’re looking at something with a taproot system. Alfalfa and sweet clover have the best tap roots for that.”

For a short-term cover crop, try something in the radish or Brassica family, says Verhallen. “They do have a taproot, and it will get its way through as long as you’ve got some soil moisture. But it’s not going to necessarily break up a true tillage pan, just because it’s not growing long enough.”

Considerations before planting
Cover crops are a great solution for many problems that farmers face, but there are challenges to consider as well. Sourcing (and establishing) seed can sometimes prove difficult, especially in years where seed may be in short supply. Choosing the right cover crop and fitting it into your rotation system can also be challenging. There is also the potential for pests, and weeds and herbicide programs to consider. Finally, the additional cost can be a burden to some.

Perhaps most importantly, Verhallen says, producers should have a termination plan in place before adding a cover crop to their rotation. “Sometimes farmers get a surprise if they haven’t grown a lot of these cover crops before,” she says. “They’ll find that they had a wide open fall, lots of moisture, and suddenly they’ve got three feet of radish and oats everywhere. It’s just one of those things where you want to make sure you’re thinking ahead and have a plan in place.”

At the end of the day, says Verhallen, you have to make sure you have the right cover crop for the right job at the
right time of year. “My goal is for producers to have success in cover crops and build up some confidence and experience in using them.”