We’ve all heard the sayings about the importance of using the right tool for the right job.

Improvements to two tools could mean that we’ll have the right tools to ensure the right wheat flour quality for the right end-use, and that would benefit Ontario wheat breeders, growers, millers and processors.

Dr. Koushik Seetharaman, cereals chair in the Department of Food Science at the University of Guelph, is leading the research to improve the two tools. The GlutoPeak is a new technique that Seetharaman’s research team has optimized. Solvent retention capacity testing is an old method that the researchers hope to make more reliable and repeatable.

Measuring gluten quality
The GlutoPeak is an instrument developed by German company Brabender GmbH. Gluten is a unique protein in wheat that develops when a dough is made, and gluten protein characteristics greatly affect a flour’s suitability for various products.

“The GlutoPeak uses a very small amount of sample and gives a result in about five minutes or less. Basically, the instrument stirs the sample [of flour mixed with a solvent] at a really high speed.” The gluten resists being stirred and the GlutoPeak records the pattern of resistance, which produces “a curve that can be interpreted to assess the quality of the gluten, and therefore the quality of the flour,” says Seetharaman.

“Compared to all other flour quality analysis techniques, some of which require large samples and some of which are time consuming, this one can actually determine quality differences. That is what is unique and interesting about the GlutoPeak.”

Seetharaman explains that those other tests actually measure gluten quantity, which his research team has determined is not the same as gluten quality. For instance, two flours each with 10 per cent protein content might perform quite differently from each other when baked in a specific product.

Seetharaman’s research team has been working on several aspects related to the GlutoPeak’s performance. He says, “When we started two or three years ago, the instrument was a prototype, so we have helped the company refine it in terms of various mechanical and software-related issues. Then we have developed a standardized procedure that everybody can use – whether you’re a breeder, a miller, a processor or a researcher. We’ve also done tests using the machine to understand what it is that we are measuring, so the machine is also an interesting research tool to understand [the fundamental characteristics of different gluten proteins].”

The GlutoPeak became commercially available in October 2012, and the researchers are now validating the
instrument’s performance and their standardized procedure. To do that, they are running tests at several labs to check if all the labs get the same results with the same samples.

Predicting functionality
Solvent retention capacity (SRC) tests measure various attributes related to gluten, starch and sugar characteristics to predict how a flour will function in specific end-uses. Like the GlutoPeak, SRC testing is fairly rapid and requires only a small sample size.

However, one of its main drawbacks is the potential for human error.

“The test is manually done, so you can get different numbers depending on who does it,” Seetharaman notes. “SRC is extensively used by only a few companies. Typically each company has its own database and its own person who does the test, and they create an internal standard for which SRC values are good or not good for their product.”

Although SRC testing hasn’t been very popular, Seetharaman says a recent survey indicates that export markets are beginning to use the method to measure wheat quality. So the researchers are working on procedures to make SRC results more repeatable.

Currently, the research team is sending flour samples to different labs for SRC testing. Then the team collects the results, determines the variability between the labs, and looks for ways to further improve consistency in the results.
Some researchers are also attempting to develop a mechanical version of SRC testing as a way to minimize the impact of human error on the results.

Plenty of practical applications
Since Seetharaman became cereals chair in 2007, a cornerstone of the cereal research program has been consideration of the needs of the entire wheat value chain in Ontario. Every six months the researchers get together with stakeholders all along the value chain to present their latest research, discuss any issues the stakeholders might have, and work out how to resolve those issues. “I think we have done a really good job of having conversations across the value chain and not just independent conversations with each of the stakeholders,” he says.

In the GlutoPeak and SRC research, input from agencies like the Grain Farmers of Ontario as well as wheat breeding and wheat processing companies helps ensure the final results will have the potential to benefit the whole value chain.

For breeders, the fact that both tests require only small sample sizes means that breeders could start testing for quality attributes quite early in their breeding programs, when only a few plants are available for testing. This could help speed up progress in developing varieties tailored to specific end-uses.

Seetharaman’s research team is also investigating the possibility of including the GlutoPeak and SRC tests as part of the Ontario Cereal Crop Committee’s variety registration process. The committee already uses measures like protein content to determine if a variety should be recommended for registration. Since the GlutoPeak and SRC tests could be better predictors of end-use quality, using these tests could increase registration of Ontario wheats designed for specialty markets.

These specialty wheats could benefit farmers, giving them more defined markets for their wheats. In addition, these varieties could be segregated and marketed through identity-preserved channels, so farmers could get a better price for them.

“However, for this opportunity to open up, the miller or the elevator would need to be educated to understand that paying for or segregating wheat based on percentage of protein is not the best approach,” notes Seetharaman. “A quality parameter would be a better way to price wheat.”

For instance, his research team’s GlutoPeak work has shown that the differences between soft and hard wheat are not just related to per cent protein. “Typically soft wheat has low protein and hard wheat has high protein, but that by itself is not the reason why soft wheat functions differently from hard wheat. It is how the gluten actually is folded and what conformation it has, and how it actually interacts, that appear to be different between hard and soft wheat,” he says.

According to Seetharaman, millers and processors could also benefit from the improved tools. “Right now, millers blend flours to get a certain per cent protein. With GlutoPeak, they could blend to achieve a certain quality, and they could deliver that quality to a processor. And the processor would have the opportunity to look at those values and see which values are best suited to the kind of product they make.

“We have worked with two or three companies to show that this test reduces variability in their incoming flour, reduces waste in manufacturing, and improves consistency of their products.”

Next steps
Once the procedures and protocols are validated for the Gluto Peak and SRC testing, the researchers hope to establish benchmark values for the tests – what values are good for bread and what values are good for cookies, for example.
Because environmental conditions can influence protein in wheat crops, the researchers are currently testing hundreds of samples of Ontario wheats collected in 2010, 2011 and 2012. They will be correlating such factors as wheat variety, growing conditions and crop management practices with flour performance in different end-uses. This analysis should provide a comprehensive database for using GlutoPeak and SRC testing for predicting
end-use quality.

As well, this analysis is pointing to some interesting relationships between protein quality and crop management practices, such as fungicide, nitrogen or sulphur applications. So in the future, wheat growers might be able to fine-tune their production practices to achieve specific quality characteristics required by specific buyers.
The benchmarked values would provide a great starting place for uses all along the value chain, to advance wheat breeding, variety registration, flour blending, and processing.

Agriculture and Agri-Food Canada is providing funding through the Canadian Agricultural Adaptation Program for Seetharaman’s GlutoPeak and SRC research. Additional funding has been provided by ADM, Brabender and the Ontario Cereals Industry Research Council. 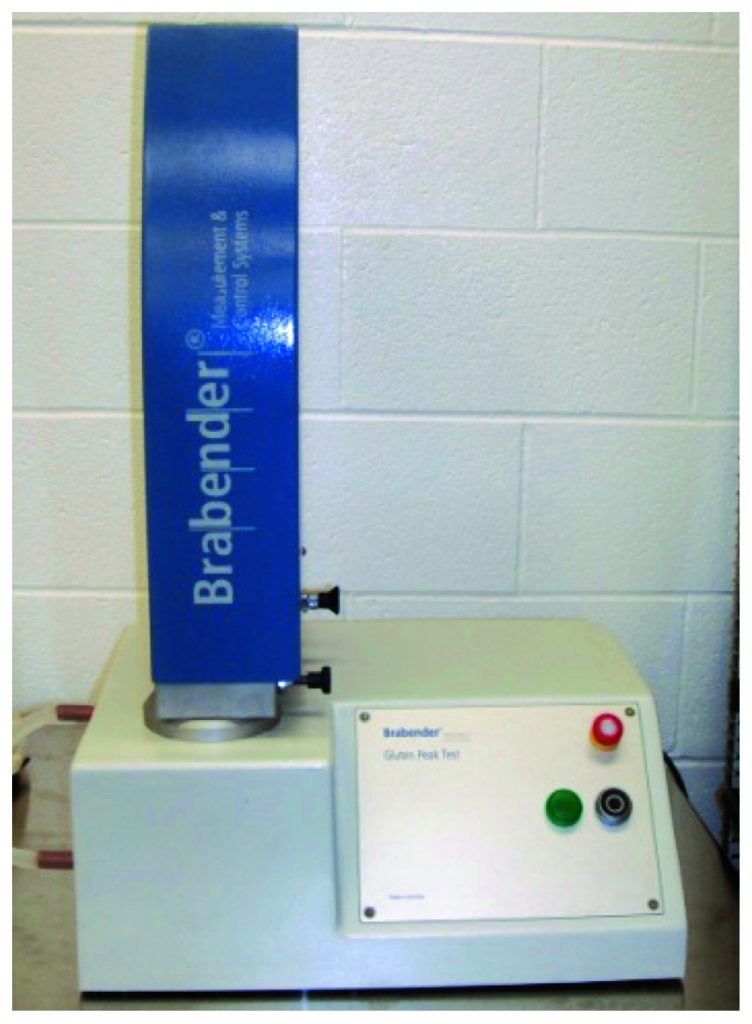 The GlutoPeak evaluates gluten quality Improvements to two tools could mean that we’ll have the right tools to ensure the right wheat flour quality for the right end-use.