At the scale of an atomic microscope it has become possible to package molecules that, in water, won’t clump up but will disperse evenly. What if that could be done with the active ingredients in weed control products? 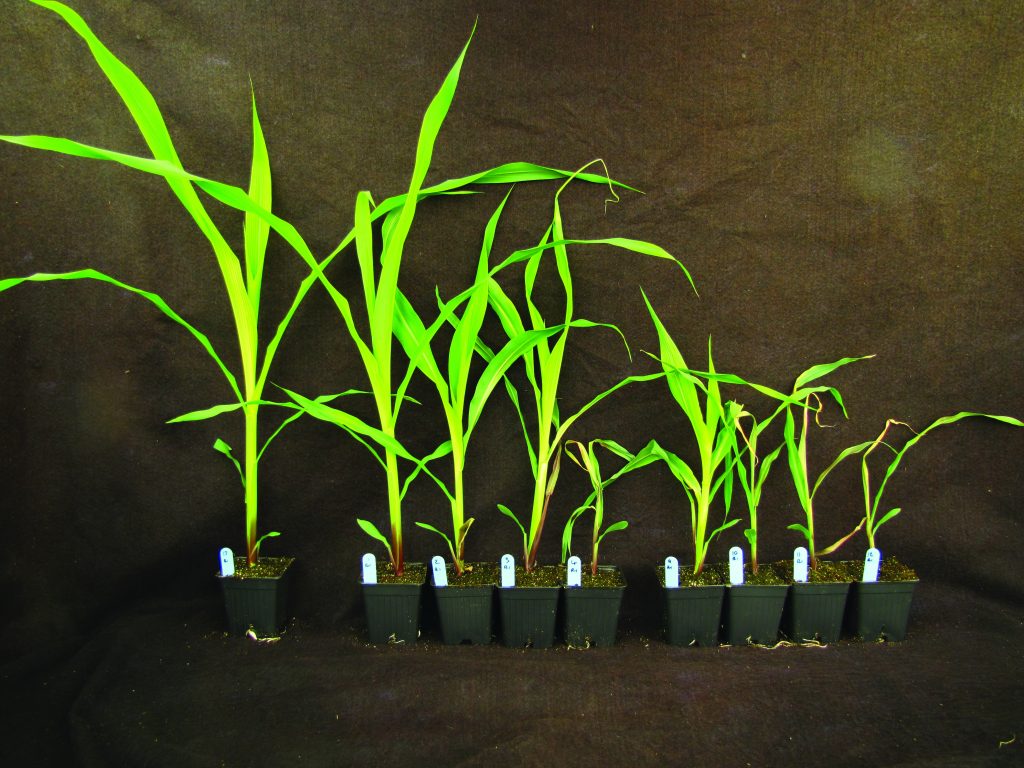 Volunteer corn seedlings’ responses to a Vive herbicide formulation (from left to right). The first plant was not treated. Plants 2 to 5 were treated with the commercial formulation. Plants 6 to 9 were treated at the same rate with the super-fine At the scale of an atomic microscope it has become possible to package molecules that

Well, we don’t know yet for sure, but there’s a bright light coming out of some lab doors in Ontario.

Vive Crop Protection, a Toronto-based formulation company, has succeeded in packing molecule-sized active ingredients into a basic, chemically neutral, polymer particle that it calls Allosperse. It has initial positive results in the first greenhouse growth room trial at the University of Guelph, conducted by Dr. Clarence Swanton in 2012.

“They [Vive Crop Protection] asked if we could test a couple of their formulations early in 2012, so we did,” says Swanton, a senior weed scientist at the University of Guelph. “They had been working with some pesticides, and had found some activity with pesticides, but they had not been able to find a response to herbicide.”

The first University of Guelph product test, in early 2012, was with fenoxaprop-p-ethyl, a herbicide used to control certain annual and perennial grassy weeds. It is used in cereals (mainly wheat), feed, forage crops, ryegrass for seed and turfgrass.

Swanton tested the Allosperse formulation in the university growth chambers on green foxtail, corn and oat. He used a wide range of doses for the testing, and applied it with water at recommended field rates. In the ideal growing conditions, the initial results were encouraging. A follow-up trial in field conditions is planned for 2013.

The three species represent three levels of susceptibility to the herbicide in its traditional formulation. Green foxtail is highly susceptible. Corn has moderate susceptibility and oat is moderately tolerant.

“We found that we were able to quite substantially reduce the GR-50 value in the highly susceptible green foxtail and in the moderately susceptible corn,” Swanton says. “The GR-50 value is the required dose to control half of the population. We reduced that in our greenhouse study by about 50 per cent.”

Meanwhile, the response in the tolerant oat population remained at about the same value that it shows when exposed to the commercial formulation.

Ultimately, Swanton says, the goal of the project is to get a formulation that will penetrate the leaf cuticle and membrane, and do it in a more efficient way.

“The other part is that no solvents are required in the formulation. All of a sudden, you take the whole solvent chemistry and the toxicology associated with it, and you remove that from the equation. In my mind, that’s huge,” he notes. “There’d be two benefits from eliminating solvents. First, the formulated compounds would presumably be more economical if I don’t have to put solvent in and if I don’t have to ship solvent. Then, if we could reduce the
toxicology in the environment, that would be a very positive step forward, and suppliers still could achieve good levels of profitability.”

According to Vive Crop Protection CEO Keith Thomas, Allosperse is a unique delivery mechanism for herbicides, insecticides and fungicides.

“Our polymer particles are super small and they are able to hold active pesticide ingredients. Our final crop protection formulations, with the ingredients, are larger. They can be photographed with an electron microscope in a size that’s one step larger than nanotechnology.”

“Allosperse can be modified to incorporate a range of molecule sizes. We can produce Allosperse-based pre-mix products with multiple active ingredients, though our first products will likely be solo products designed to be tank-mixed with other active. A large potential benefit of our technology is the ability to reduce the amount of active ingredient,” Thomas says.

According to Thomas, the company continues its research, including working on products that target both specialty crops as well as major row crops. “We are currently developing products based on both patented and off-patent active ingredients.

For patented active ingredients, we are working with the patent-holder to develop new and improved version