Features
Teasing out the connections 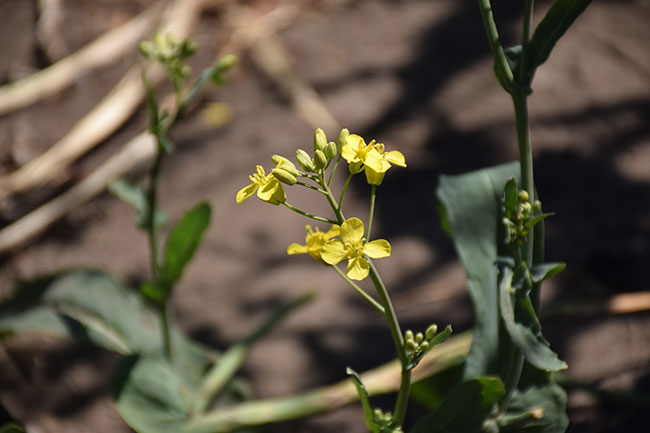 A project in Saskatchewan aims to determine how a diverse soil microbial community contributes to higher canola yields. Photo by Top Crop Manager.

Crop growers and scientists know that more diverse crop rotations are associated with better crop performance and better yields. As a soil microbiologist, Jennifer Town knows that, “Adding diversity in your crop rotation is one way that you can increase the diversity and change the composition of fungi and bacteria in your soil.”

But how does this more diverse microbial community contribute to those higher crop yields?

Town is one of the researchers involved in a project looking for answers to this question. “We want to try and tease out the role that the microbiome is playing when you see a more positive effect by having a more diverse rotation.”

She notes that soil microbes can have both positive and negative interactions with plants, which will influence crop yields. For instance, some microbes are pathogens that can cause plant disease, while others may provide benefits like increasing a plant’s nutrient absorption or boosting its immune system. The composition of the soil microbiome also plays an integral role in the availability of nutrients for plants because certain microbes break down organic material, which leads to the release of nutrients in plant-available forms.

“This project is zeroing in on the role of the microbiome in decomposing biomass and the turnover of organic matter in the soil, and how both of those things and better activity in those areas can lead to better nutrient availability,” Town says.

The project is funded by Alberta Canola and SaskCanola through the Canola Agronomic Research Program. The project’s principal investigators are Bobbi Helgason with the University of Saskatchewan and Tim Dumonceaux with Agriculture and Agri-Food Canada (AAFC) in Saskatoon. Town started working on the project when she was a postdoctoral researcher; she is now a research scientist at AAFC-Saskatoon.

Three rotations, three sites
The project had field sites in Scott and Swift Current, Sask., and Lacombe, Alta. Each site compared continuous canola, a canola-wheat rotation, and a canola-pea-barley rotation. The field work took place in 2018 and 2019 in plots originally established in 2008 by Neil Harker and later managed by Breanne Tidemann, both with AAFC.

“For each rotation at each site, we used DNA sequencing to look at changes in the bacteria and the fungi in: the bulk soil, which is the area a little away from the plant roots; the rhizosphere, which is the area immediately surrounding the roots; and the microbes that are either really tightly adhered to the outside of the roots or inside the roots, which we call the endosphere,” Town explains.

The project team collected soil nutrient data from the plots using Western Ag PRS (plant root simulator) probes. “We put these probes in the soil in between the crop rows to measure the flux of plant-available nutrients,” she says.

As the name indicates, the probes simulate nutrient availability to a plant root. The team used these probes to measure levels of macronutrients like nitrogen, phosphorus, potassium, magnesium and calcium, and micronutrients including iron, copper, zinc, boron and aluminum.

“For us, nutrient availability is a measurement of how well the microbial community is functioning,” Town explains. “Is the community able to degrade the available plant tissues really effectively and make those nutrients available for future crops?” 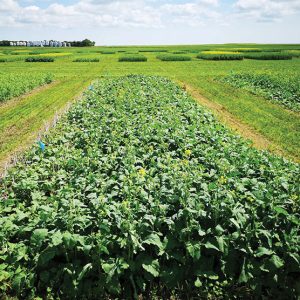 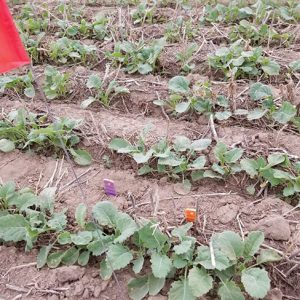 PRS probes, with their orange and purple tops sticking up above the ground, were used to measure the flux of plant-available nutrients at the three sites. photos courtesy of Agriculture and Agri-Food Canada.

Highlights of initial results
The project’s final results will be released this fall, but Town is able to share some of the findings so far.

In terms of the soil microbiome’s diversity, some key findings were consistent across all three sites. “We found that the fungal community was more diverse in the three-year rotation compared to continuous canola, particularly in the root and the rhizosphere – the communities really closely associated with the plant.”

Another interesting finding relates to a fungus called Olpidium brassicae. “This fungus has been observed throughout Western Canada [in previous research] and it is pretty abundant on the roots of canola. In our study, we found that it was really abundant at all the sites under all conditions, but in the continuous canola plots, this fungus was almost the only thing we saw in the root fungal communities, especially at Lacombe,” she says.

“To see a fungus so completely dominate the root environment is unusual. We are very interested in this because the root microbiome is the plant’s first line of defence against pathogens in the soil and it also plays a huge role in plant health.

“At this point, it is hard to say if this fungus is friend or foe. Is it excluding microbes that are beneficial? Is it excluding microbes that are pathogens? In previous studies, Olpidium brassicae hasn’t been found to cause disease and it hasn’t been associated with substantial yield losses. Some other fungi that are closely related to this fungus have been implicated in virus transfer to crops such as lettuce and cucumber, but not in canola. However, no one has really comprehensively studied Olpidium brassicae yet.”

The project’s findings on nutrient availability varied from site to site and year to year, which Town suspects likely had to do with the moisture differences between the three sites.

She says, “Swift Current, which was the driest of the three sites, was where we saw the greatest differences in nutrient availability. Nitrate – which is a plant-available form of nitrogen – and magnesium and calcium were significantly higher under a more diverse rotation than under a shorter rotation at that site.”

However, such nutrient availability differences were not found between the rotations at Lacombe, the wettest of the three sites.

These results suggest that a more diverse crop rotation could be especially important for nutrient availability under dry conditions. “If the growing conditions are really dry, then microbial activity generally is lower,” Town explains. “That means the microbial community tends to be slower at breaking down organic matter [so nutrient-cycling tends to be lower]. I think the problem of lower nutrient availability under dry conditions is worsened if the composition of the microbial community is less diverse.”

The researchers are currently finishing the DNA analysis and will be finalizing their results and conclusions over the coming weeks.

Looking ahead, Town says, “In terms of future directions, we could certainly envision following up on some of the interesting patterns that we saw in the root microbiome that were consistent at all three sites.”

She emphasizes that this type of microbiome research has practical implications for crop growers. “Our goal is to make connections between how crop selection choices influence the microbiome composition and then understand how those changes in the microbiome translate into overall soil health and disease pressure,” she says.

“For example, this project’s three-year diverse rotation included pea, a nitrogen-fixing crop, and we found higher available nitrogen in the following spring after that diverse rotation. So, does that mean you will need less fertilizer? Or if the disease pressure is lower, does that mean you don’t need a fungicide application that year? Those are the kinds of practical management decisions that we are hoping to inform by doing this kind of work.”