Research looked at different rates and forms when seed-placed. 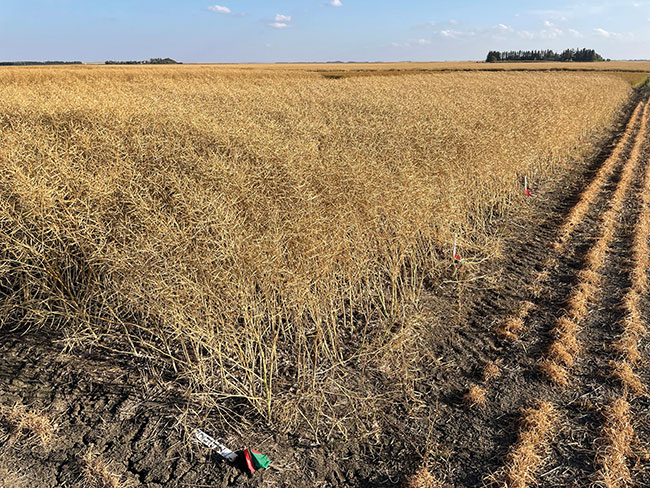 Monoammonium phosphate was the most profitable P source. Photo by Chris Holzapfel.

How much (or how little) is too much (or too little)? That’s the question faced by canola growers when it comes to adding phosphorus (P) in the starter fertilizer blend. Research has very well documented that high rates of seedrow P can be damaging to germination and emergence in sensitive crops like canola. Additionally, most soils in Western Canada are rated low to very low in P fertility.

“Saskatchewan farmers are increasingly aware of the long-term importance of P fertilization and many strive to maintain or build soil residual P over the long-term,” says Chris Holzapfel, research manager with the Indian Head Agricultural Research Foundation in Indian Head, Sask. “They are seeking ways to improve the relatively low fertilizer-use efficiency in the year of application, and novel formulations are often seen as possible solutions to this challenge.”

To address these challenges, Holzapfel led a research project in 2020 and 2021 to look at how the use of novel P sources could allow higher rates of seedrow P. The objective was to demonstrate canola response to increasing rates of seed-placed P fertilizer for various formulations. The focus was on both stand establishment and yield.

Field trials with canola were conducted at Saskatchewan AgriARM research sites near Swift Current, Scott, Indian Head, and Yorkton in 2020 and repeated at these same four locations in 2021 with additional trials at Melfort, Outlook, and Redvers for a total of 10 site years. Generally, most sites were much drier than the long term average in 2020. Only Scott in 2020 and Indian Head in 2021 had above average precipitation. Six of the sites tested low in P fertility, and four tested medium.

Three formulations were compared, either applied alone or in a blend. Monoammonium phosphate (MAP; 11-52-0) is the standard granular fertilizer most farmers use on the Prairies. MicroEssentials S15 (13-33-0-15) provides season-long sulphur (S) to canola. CrystalGreen (Struvite; 5-28-0 plus 10 per cent Mg) claims superior crop safety with a salt index of eight, compared to 27 for MAP and 21 for MicroEssentials S15. All three formulations and a blend of 50:50 MAP:CrystalGreen were applied at three rates of 22, 40 or 58 lbs P2O5 per acre (25, 45, 65 kg/ha), and were compared to a control without P fertilization. Typically, provincial government recommendations for safe rates of seed-placed P are from 14 to 25 lbs P2O5 per acre (15 to 28 kg/ha). The 50:50 blend resulted in actual P2O5 proportions of 35:65 from CrystalGreen and MAP,  which is comparable to the current industry recommended 25:75 blend.

The Canola Council of Canada’s target plant stand is five to eight plants per square foot for optimum yield, and should be kept in mind when looking at the results from the research. 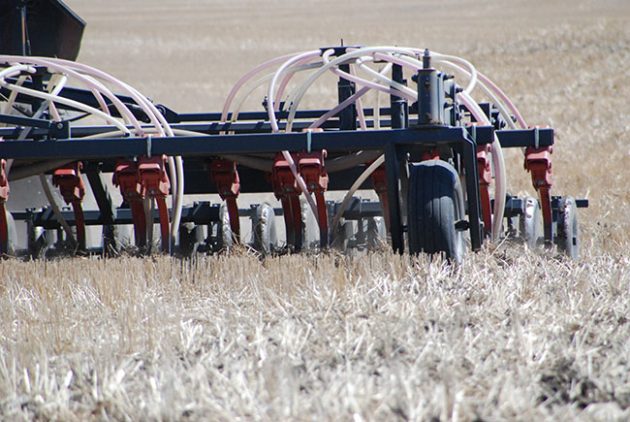 Plant populations declined linearly as P rate increased for all formulations, except for 100 per cent CrystalGreen, which did not have an effect on plant populations. The greatest decline was with MicroEssentials S15, declining from 6.4 plants/ft2 at 22 lbs P2O5/ac to 5.6 plants/ft2 at 58 lbs/ac. The next was MAP declining from 7 to 6 plants/ft2 as the rate increased, followed by the MAP:CG blend going from 7.4 to 6.8 plants/ft2 as P rates increased. Again, there were site differences, with five of 10 sites showing an interaction between P rate and fertilizer formulation and four of 10 sites showing no treatment effects at all.

Holzapfel says that generally the greatest reductions in plant stands were seen with MicroEssentials S15 as the rate of seed-placed P was increased, followed by MAP and the MAP:CG blend, while struvite (CG) applied on its own rarely affected plant populations, except occasionally at the highest rate but only slightly compared to the other forms

“In many of the cases where no effects on emergence were detected, such as at Indian Head and Melfort, we can largely attribute this lack of response to the finer soil texture, higher organic matter, and better moisture conditions,” Holzapfel says. “However, it is important to appreciate that seed-placing high rates of P fertilizer can still be risky in these environments.”

Averaged across all 10 locations and formulation, MAP, MicroEssentials S15 and the MAP:CG blend had statistically similar yields of 41 to 42 bushels per acre (2305 to 2336 kg/ha), while CrystalGreen averaged 40 bu/ac (2242 kg/ha), compared to the control at 38 bu/ac (2138 kg/ha). However, only Melfort had a differential yield response to formulation, where struvite was significantly lower yielding than the other applied formulations. Canola yield, averaged across all sites and rates, increased significantly from 40 bu/ac (2230 kg/ha) at 22 lbs P2O5 /ac to 41 bu/ac 2303 kg/ha) at 40 lbs/ac and 42 bu/ac 2364 kg/ha) at the highest P rate. While significant statistically, these increases were minor agronomically or economically. Furthermore, only four of 10 sites showed an increase in seed yield as P rate increased. The other six sites had similar yields regardless of rate applied. 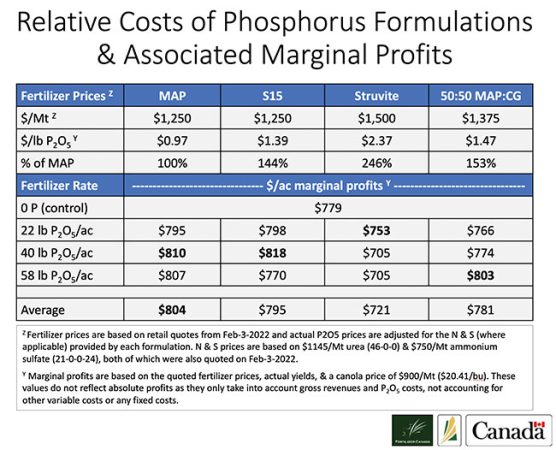 There wasn’t always a relationship between low P levels and a yield response to rate. Sometimes low test P soils responded to increasing P rates, and sometimes they didn’t. Indian Head 2020 (7 ppm) was non-responsive for yield to increasing P rates, while Redvers 2021 (6 ppm) did respond to increasing P rates. Similarly, some soils testing medium P, such as Scott in 2020 (12 ppm), had increasing yield with increasing rates, while Swift Current in 2021 (16 ppm) did not. “While yield responses to P can be variable on a field-to-field basis, it must be appreciated that P fertilization is also a long-term investment that is necessary for maintaining or building the overall productivity of our land, regardless of the chosen formulation or responses in the year of application,” Holzapfel says.

An economic analysis was also conducted for the various rates and formulations. Fertilizer cost was calculated and subtracted from gross revenue. Holzapfel says that when the gross revenues and total P costs (after discounting for N and S) were considered, the most profitable rates varied slightly across forms, but all were similar for MAP, MicroEssentials S15, and the MAP:CG blend. Due to the higher cost and weaker yield response for 100 per cent CG, the lowest rate was the most profitable for this formulation.

Looking at the overall results, Holzapfel says there are a few key points. Importantly, and as expected, the greatest risk of crop injury was on coarse textured, lower organic matter soils especially when dry.

“There was injury at a few locations but not all, which is fairly typical. Official recommendations are, depending on the specific conditions, sometimes conservative, and we routinely seed place 40+ P2O5 /ac in trials on our land at Indian Head,” he says. “We have data where we’ve gotten away with more than double that in small plot trials. However, I’d consider exceeding recommendation seed-placed P rates a risky practice, and not something I’d recommend on a commercial scale without careful discussion and consideration.”

Struvite, alone or in blends, did have an undeniable seed-safety advantage, but it is more expensive, and there may be a yield penalty if used as sole P source in low P soils. Holzapfel explains the observed yield penalty may have been because struvite is insoluble and takes time to provide plant available forms if  applied on its own. Even though it had the highest stands, the stands with the other treatments were generally adequate so that they were not limiting to yield.

“We didn’t see the yield penalty at all sites (it was mostly Melfort) but, on average, yields were a bit lower with 100 per cent struvite. Due to its low solubility and high cost it wouldn’t be recommended to use this product as the sole P source, particularly in cold or low P soils where early season availability is likely to be limited.”

Yield responses to other forms were generally similar, while MAP was the most economical, and MicroEssentials S15 is convenient for storage, handling and as a S source.

Finally, rather than pushing seed-placed rates beyond provincial recommendations, there’s always side-banding P. “For those canola growers who have the ability, most western Canadian research has shown side-banding to be as effective as in-furrow placement, or even advantageous if utilizing rates that have potential to reduce stands,” Holzapfel says.

The research carried on at four sites in 2022, so the story will continue to unfold. The four locations are Indian Head, Melfort, Scott, and Swift Current, representative of a wide range of soil environments.