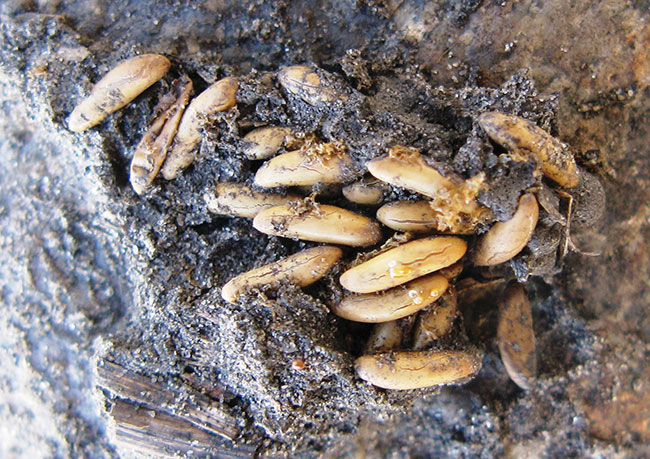 Lush, green vegetative areas, such as field edges, are attractive to grasshoppers for egg-laying. Photo courtesy of John Gavloski.

Which soybean pests cause western Canadian producers most stress?

Cassandra Tkachuk, production specialist for Manitoba Pulse and Soybean Growers (MPSG), typically puts diseases like root rot at the top of the list. Research projects focused on diseases like root rot comprise the “largest basket of research we fund,” she says, based on the level of economic damage they can cause versus pests in the insect and weed categories.

But hot, dry weather throughout the growing season has temporarily bumped insects to the top spot of troublesome soybean pests.

In 2021, grasshoppers were the biggest insect threat in Manitoba, says John Gavloski, provincial entomologist, followed by spider mites and cutworms, in that order.

“Grasshoppers are more of an issue when it’s dry. When you get consecutive hot, dry years, that tends to build the population up,” Gavloski says. “That’s exactly the situation here. There are some pathogens that can be helpful in reducing their populations, but we haven’t been getting them. Timely rains after egg hatch can knock the population back, but we didn’t get those either.”

weeds to watch 2021, producers were urged to do lots of scouting in June, particularly in areas that had lush, green vegetation the previous August and September, such as field edges. These are areas that are favourable for egg laying. If heavy populations of juvenile grasshoppers are discovered, management is easier and more efficient than later when they become adults. Some producers were able to get away with spraying just the field edges.

Tkachuk says that though they are as yet only sporadically responsible for economic levels of damage in soybeans in the province, wireworms are another pest to watch.

She points to work conducted by Bryan Cassone at the University of Brandon that focuses on wireworm species identification and trapping techniques.

This September, Cassone and colleagues published data from a three-year larvae surveillance project conducted in 31 fields across Manitoba in partnership with MPSG. They found that wireworms were present in 94 per cent of surveyed fields, although the catch varied from year to year and infestations were rare in the regions studied.

“It can be a bit labour intensive to get a clear picture of whether you have wireworm pressure in your field or not and the symptoms may be mistaken for some other agronomic issue,” Tkachuk says.

This fall, Agriculture and Agri-Food Canada researcher Haley Catton and colleagues published a new field crop guide to wireworms in Prairie field crop production. The document offers an in-depth look at the life cycle of wireworm, scouting and monitoring techniques and control options. 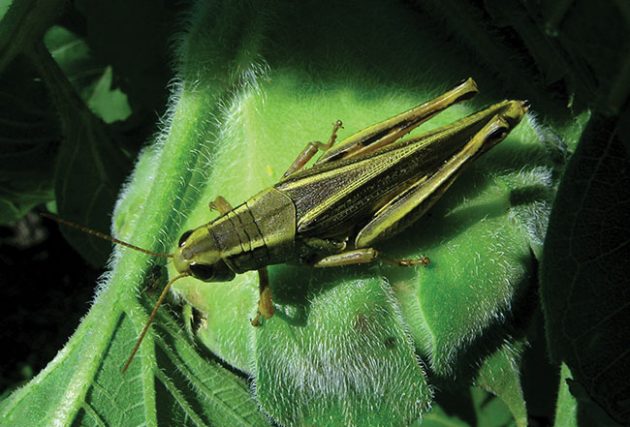 The hot, dry conditions experienced in 2021 were ideal for grasshoppers to thrive.

Diseases
Tkachuk says the main pests of concern in soybean are the root and stem diseases, chiefly Phytophthora root rot, followed by stem pathogens and foliar pathogens, in that order.

Annual fungicide product evaluation and timing trials led by Kristen MacMillan at the University of Manitoba through the MPSG On-Farm Network tend to show that there is little economic benefit to applying a fungicide.

“We’ve had a total of 66 site years of on-farm trials, not including Kristen’s work,” says Tkachuk. “Seventeen per cent of them responded significantly in terms of yield, but only six of those – or nine per cent – had a positive return on investment.”

Tkachuk says this is likely because there hasn’t been enough disease pressure to justify applying a fungicide in soybeans, but it’s also due to timing difficulties related to the extended flowering period.

“If conditions are right for diseases to develop, a wetter year with ideal conditions, that might be a good year to get a return on your fungicide investment,” she says.

Another worthy disease mention is northern stem canker, which Tkachuk says has shown up in Manitoba recently, but has not yet had an impact on yields. Sudden death syndrome of soybeans and brown stem rot are two other diseases that haven’t officially appeared in Manitoba but are “expected,” she says.

“SDS tends to move with nematodes, and brown stem rot looks a lot like SDS. The lesions look the same, but if it’s brown stem rot, if you cut the stem it’ll be brown inside.”

A disease survey will be conducted in 2022, Tkachuk adds.

Weeds
Tkachuk says soybeans are poor competitors against weeds, so “the more weed control, the better. Any weed pressure can have a really negative impact.”

The arrival in Manitoba of multiple-herbicide-resistant weeds has also caused concern among soybean growers. In 2019 and 2020, tall waterhemp was identified in Manitoba. In September, Manitoba Agriculture and Resource Development confirmed the presence of Palmer amaranth in a field in the RM of Dufferin.

“[Palmer amaranth, like smooth pigweed and waterhemp], is a Tier 1 noxious weed and you have to destroy it, but it looks like redroot pigweed,” she says. “If they escape herbicides –  they have known resistance to several herbicide groups in the U.S. – you need to catch them before harvest and/or physically destroy them when herbicides don’t do the trick.”

In drought conditions, like this past summer, Tkachuk says MPSG is also on the lookout for multiple-herbicide-resistant kochia, which can thrive in dry or saline patches.

Tkachuk says Manitoba producers have the benefit of being able to see weed problems coming from a mile away. “We’re unlucky that we inherit pests with resistance but we’re lucky in that we can adapt our practices,” she says. “We might need to start thinking ahead of the problem in terms of integrated weed management.”

She points to research conducted by AAFC research scientist Charles Geddes in Lethbridge, Alta., who is the principal investigator in a long-term project looking at integrated weed management techniques for herbicide resistant weeds including kochia, such as increasing seeding rate, reducing row spacing and herbicide layering.

Tkachuk says good rotations are still the keystone of weed control for soybeans, but producers will get better control by “stacking” strategies – in other words, using every tool available.


Related
Soybean diseases: what to watch
Keep diseases off balance – ‘rotate’
Weeds to watch for in Manitoba
Get ready to spray soybean diseases