Features Weed Management
Weeds to watch for in Manitoba

And some for growers in Alberta and Saskatchewan, too. 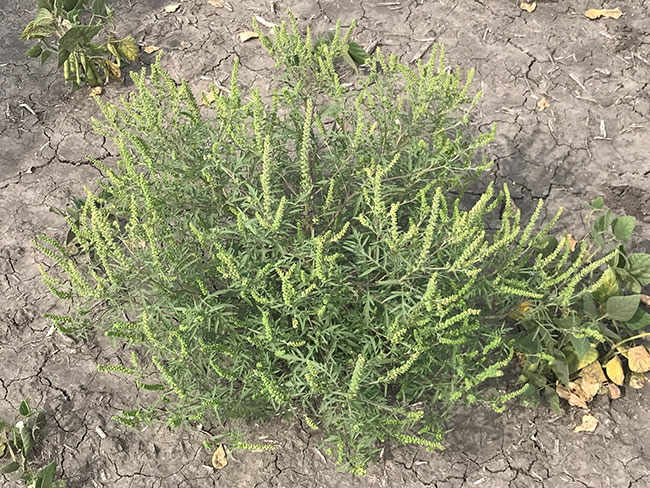 Common ragweed is a Tier 3 noxious weed in Manitoba, producing up to 60,000 seeds that can survive in soil for 80 years. Photo courtesy of Tammy Jones.

Weeds are a yearly challenge for farmers across the Prairies. Provincial weed specialist Tammy Jones with Manitoba Agriculture and Resource Development in Carman, and Robert Gulden, professor at the University of Manitoba in the department of plant science in Winnipeg put together a list of the “Dirty Dozen” of Manitoba weeds that should be on farmers’ radar screens.

“Some of the weeds on the list have been around for a while, but are getting more abundant and harder to control. Others are newly introduced, or ones we are concerned that might show up and are very difficult to control,” Jones says.

Wild oat
An annual weed that is usually in the top five weeds in the Manitoba weed surveys. One plant per square foot can reduce wheat, barley and canola yields by 10 per cent and flax yield by 20 per cent. The biggest challenge is herbicide resistance, with populations identified as being resistant to Group 1, 2, and 8, and multiple combinations of 1+2, 1+8, 2+8, 1+2+8, 1+2+8+25 in all three Prairie Provinces, and 1+2+8+14+15 in Manitoba.

“When you have five-way resistance, there isn’t much left for wild oat control aside from Group 3 pre-emergent herbicides and glyphosate and glufosinate in herbicide-tolerant crops,” Jones says. “And the big concern that Hugh Beckie identified when he was with Agriculture and Food Canada is that wild oats will likely be one of the first weeds to develop resistance to glyphosate.”

Kochia
Kochia is a Tier 3 weed under the Noxious Weeds Act of Manitoba and requires control for infestations causing harm. Kochia makes the list because Group 9 glyphosate resistance is rapidly spreading, with 59 per cent of surveyed populations showing resistance in Manitoba. Additionally, all kochia populations are assumed to be resistant to Group 2 herbicides across the Prairies. In Alberta, populations resistant to Group 2+4+9 have been identified. Saskatchewan has confirmed populations of Group 2+4- and Group 2+9-resistant kochia.

“We probably have some Group 2+4+9-resistant populations in Manitoba, too. We have sent in samples for testing, but we don’t have the results back yet,” Jones says.

Kochia resistance can rapidly spread because it can outcross, allowing resistant genes to transfer to non-resistant kochia plants. It is also a prolific seed producer, with 15,000 to 30,000 seeds produced per plant.

Redroot pigweed
Redroot pigweed is a common weed, and is an alternate host for many insect pests. Under hot conditions, the seedlings can rapidly advance beyond recommended herbicide application stages. In the 2016 Manitoba herbicide-resistance weed survey, five per cent of samples had confirmed Group 2 herbicide resistance.

“I think we are under-reporting how much Group 2 resistance we have. In 2018, I submitted five samples for screening against Group 2 herbicides and four came back positive,” Jones says. “We rely on Group 2 imadizolinone herbicides more and more for broadleaf weed control, so that has me concerned.”

Biennial wormwood
Biennial wormwood was number 20 on the 2016 Manitoba Weed Survey, and doesn’t want to go away. It can be an annual or biennial, germinate in the spring, summer or fall, and produce up to one million seeds per plant.

“Not only is it a very prolific seed producer, it doesn’t like to die. There aren’t a lot of good herbicides, and it is quite tolerant to most preplant incorporate and pre-emerge herbicides,” Jones says.

Biennial wormwood is a prolific seed producer, producing up to one million seeds per plant. Photo courtesy of Manitoba Agriculture and Resource Development.

Group 9 glyphosate resistance in Kochia is rapidly spreading, with 59 per cent of surveyed populations showing resistance in Manitoba. Photos courtesy of Tammy Jones.

Lamb’s-quarters
A broadleaf weed that has been around for a very long time and usually in the top 10 Manitoba weed survey, lamb’s quarters is another Tier 3 in Manitoba. Twenty plants per square foot can reduce barley yield by 20 to 25 per cent.

“We are wondering what is going on with pre-seed glyphosate control of lamb’s-quarters. There isn’t any documented proof of resistance in Manitoba, but we don’t seem to be getting ahead of it,” Jones says.

Waterhemp
Waterhemp is a huge problem in Ontario and the U.S. Midwest Corn Belt, with resistance to multiple herbicides including Group 9 glyphosate. It can produce 500,000 to one million seeds per plant, allowing it to rapidly take over a field with its competitive growth that reaches up to eight feet high. It was found in Manitoba in 2019 in four municipalities with at least two fields in each. It is a Tier 1 noxious weed that requires all plant parts to be destroyed. Resistance hasn’t been confirmed with herbicide screening, but PCR analysis of the Manitoba populations shows Group 9+2 resistance.

“Waterhemp can spread so rapidly. It outcrosses so it has huge genetic diversity. I had a farmer who recalls having a couple unknown plants in his field two years ago. The next year there was a fairly large patch, and the third year, when I was finally called to identify the weed, it covered 35 acres with hardly a soybean plant visible,” Jones says. “This is definitely a weed that you want to immediately destroy patches with whatever means possible.”

Giant ragweed
Another Tier 3 noxious weed in Manitoba, giant ragweed can grow up to 13 feet tall. One plant per 10 square feet can reduce crop yields by 45 to 77 per cent. It has been confirmed in several fields in Manitoba.

“We expect there is herbicide resistance in those populations because it has survived glyphosate application in the field, but it has fairly dormant seed, so it is hard to grow from seed to screen with herbicides,” Jones says.

Canada fleabane is a significant problem in Ontario and the U.S. Midwest, but hasn’t been seen as a huge concern in Western Canada just yet.

Barnyard grass has been increasing on the Manitoba weed survey, reaching third place in 2016. Photo courtesy of Manitoba Agriculture and Resource Development.

Palmer amaranth
Palmer amaranth, like waterhemp, is a concern because of its aggressive growth – up to seven feet tall – its ability to produce up to 600,000 seeds per plant and its genetic diversity. Resistance to multiple Groups including 2+3+5+9+14 have been confirmed in the United States. Jones says the weed is creeping upwards from North Dakota. As a Tier 1 noxious weed in Manitoba, she says growers should aggressively eliminate any patches that try to establish.

Common ragweed
Common ragweed is a Tier 3 noxious weed in Manitoba, and can produce up to 60,000 seeds that can survive in the soil for 80 years. It is an important cause of hay fever, because it produces a very large amount of very light pollen that can move more than 125 miles on the wind – the same reason glyphosate resistance has become a concern in other jurisdictions outside of the Prairies.

“We expect to see it move in and spread. The big advantage is that with our more diverse rotations with wheat, we can control common ragweed with a Group 4 herbicide,” Jones says.

Yellow foxtail
Previously a weed of little concern, yellow foxtail moved to sixth on the 2016 Manitoba Weed Survey. It can cause 16 per cent yield loss in wheat, 11 per cent in oats, and 15 per cent in soybeans. Group 1 and Group 2 resistance has been confirmed in Manitoba.

“We are starting to see a lot of it in corn because it likes the wide-row open spaces. It seems to be a little more aggressive than green foxtail,” Jones says.

Canada fleabane
Called Canada fleabane or horsetail, the weed is a major problem in Ontario and the U.S. Midwest. In Ontario, resistant populations are confirmed to Group 9, Group 2, Group 2+9 and Group 22. The seeds are carried long distances by wind on their attached pappus (parachute). It can produce up to 200,000 seeds per plant.

“We haven’t seen it here as a major problem, or with herbicide resistance, and that boggles my mind,” Jones says. “Definitely want to keep an eye out for this one.”

Barnyard grass
Barnyard grass has been one of the forgotten grassy weed competitors, but it has been increasing on the Manitoba weed survey to reach third in 2016, compared to being outside the top 10 in the 1970s, ’80s and ’90s. Compared to wild oat, barnyard grass produces a larger number of seeds, up to 7,200 seeds per plant. A growing concern is herbicide resistance, with Group 2 resistance confirmed.

“To manage all weeds and herbicide resistance, diversity is the key. “If it is working, change it up. We’ve heard it a million times, but that’s our best strategy,” Jones says.