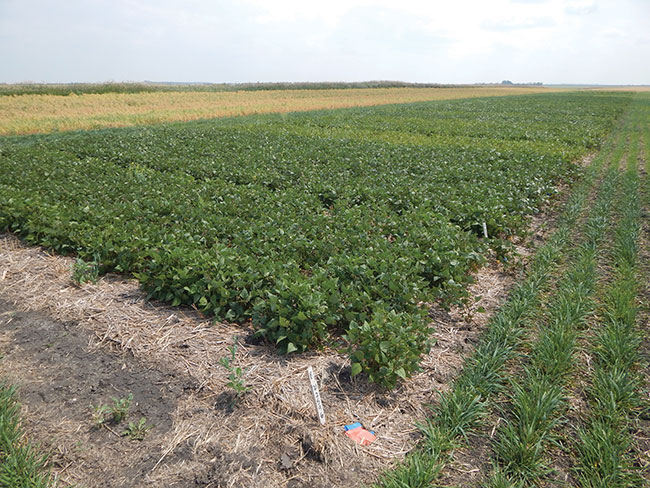 “In Saskatchewan, dry beans are a very lucrative crop option for irrigation growers,” explains Garry Hnatowich, research director with the Irrigation Crop Diversification Corporation (ICDC) in Outlook. “Under irrigation, dry beans are grown using a wide row cropping system and specialized harvest equipment. However, the key to expansion in dryland will be to find an agronomic production system to allow farmers to using existing equipment. Therefore, we were interested in evaluating the opportunity for growing dry beans using narrow row or solid seeded cropping systems and conventional equipment, similar to other pulses like lentils, peas, chickpeas and faba beans. A few growers have trialed dryland cropping systems for dry beans, and I think in areas with the right moisture conditions and a long enough growing season such as parts of the Black soil zone, beans have a position in dryland agriculture in Saskatchewan.”

“From a disease standpoint, dry beans are not as susceptible to Aphanomyces as peas and lentils,” Hnatowich adds. “Both Alberta and Manitoba have sizeable acres of dry beans and so far Aphanomyces has not been a problem. Alternatives like soybean, faba bean or dry beans are substitutes for peas or lentils in rotations where Aphanomyces is a concern, with dry beans being the highest value commodity by far. Dry beans are also often more profitable than canola, making it an attractive consideration for both irrigation and dryland growers. From a market standpoint, all dry beans for the human food market are sold on visual appearance, so frost or immature seeds won’t pass. However, there are growing markets such as local pet food manufacturers for split, chipped and poorer quality beans.”

In 2019, a dry bean project was conducted at five Agri-ARM sites in Saskatchewan comparing inoculation and fertilizer strategies for solid seeded production. The sites included one irrigated site at Outlook, and four dryland sites at Scott, Redvers, Yorkton and Indian Head. Researchers wanted to evaluate the potential for solid seeded dry bean production under dryland conditions in non-irrigated areas. They also wanted to evaluate commercial inoculants alone and in combination with nitrogen (N) fertilizer.

“Unlike other pulses, dry beans are a poor N-fixer and tend to have very specific relationships to different rhizobium bacteria strains, including differences between market classes and even varieties,” Hnatowich says. “Therefore, with limited acres and the response challenges, few inoculant companies currently offer inoculants for dry beans. The two main inoculant providers in North America, BASF and Novozymes, still haven’t made any available. For this trial, we worked with a US company and their Canadian subsidiary to test a new inoculant and different peat or granular formulations in development for dry beans. These same inoculant formulations were also compared in combination with N fertilizer so that total available N (soil N plus fertilizer N) equaled 80 lb N/ac.”

The dry bean variety CDC Blackstrap, a Black market class, was used at all trial locations. CDC Blackstrap, developed by Dr. Kirstin Bett at the University of Saskatchewan, is well-adapted for
Saskatchewan and has shown promising performance in solid seeded, straight combined dryland production. The variety is early maturing, has high yield potential with an upright plant structure and high pod set, making it suitable for straight combining. All trials were seeded to establish a plant population of 35 plants/m2 in a solid seeded system using 25 cm (10-inch) or 30 cm (12-inch) row spacing. 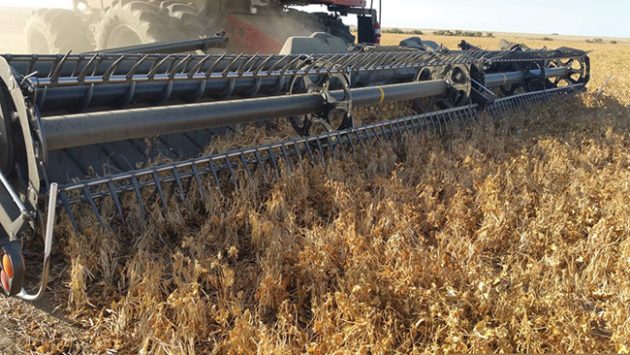 Hnatowich adds they are working on another project with Bett to look at seeding rate interaction with pod height to see if higher seeding rates and more crowded plant conditions might cause pod development to be further up the plant. Bett is also continuing research on genetics and additional dry bean varieties suited for dryland production.

The price for black dry beans in 2019 was $0.75/kg ($0.34/lb), providing gross returns for fertilizer N applications of approximately $518/ha or $209/ac, easily an economic return for the fertilizer investment. For dry bean production, growers are recommended to consider N fertilizer the primary nutrient source, but may also consider using inoculants if available as an insurance.

“Although our 2019 trial results at Indian Head were not very good due to dry conditions, we still collected some good information,” says Chris Holzapfel, research manager at the Indian Head Agricultural Research Foundation (IHARF). “The project did show that dryland solid seeded production can be an option, and with its tolerance to Aphanomyces, may provide a good option for growers that are looking for alternatives to field pea and lentil, both susceptible to the disease. Dry beans are not a really competitive crop, so starting with clean fields and planning ahead for weed control will be important. Because sclerotinia disease can be a concern with dry beans, following with a cereal crop is recommended. Similar to soybeans, dry beans may tolerate slightly drier conditions earlier in the season as long as there is enough moisture to get the plants established and growing, followed by sufficient moisture in August and September for pod production and seed filling. However, it may still be a risky crop for lots of us, especially with the weather and growing conditions over the last few years.”

In 2021, Holzapfel repeated the dryland bean project comparing different N rates, but no inoculants, at four sites: Indian Head, Redvers, Melfort and Yorkton. “We are interested in getting more general performance data for different areas in the black soil zone for yields, maturity and other factors. In the previous study, although we didn’t see any real benefit to inoculants, there was a pretty strong increase in yields with N fertilizer. In this project, it will be interesting to see what N rate results in the best performance. We haven’t had a lot of luck in Indian Head with dry beans, but the crops this year look better with the high heat and some timely late rains. We haven’t combined the plots yet, but dry beans are such a high value crop that you don’t necessarily need high yields to be profitable. Although dry beans have potential in some areas, they will not be a crop for everyone and at this stage there is no guarantee of success. We are looking forward to having additional performance data and information at the end of this year’s project.”

“Based on our research results so far, dryland bean production would likely be most successful is in the moist black and dark brown soil zones,” adds Hnatowich. “I think most of the black soil zone from the Manitoba border up through Yorkton and across to Saskatoon should be suitable. Dry beans are susceptible to frost, particularly early season frost but also late season, so more northern areas closer to Prince Albert may be pushing the limit. Moisture is the most limiting production factor, as dry beans need moisture at the pod filling stage, which is traditionally the driest period of the growing season. The biggest down side is most dry bean processors are currently based in Alberta or Manitoba, but with expected increases in irrigated acres of dry beans combined with expansion into dryland production in Saskatchewan, the increased production could be enough to attract a local processor.”