With average yields decreasing for three consecutive years, acreage continuing
to grow and at least one major disease threat looming, fungicides are likely
to become a necessary tool for Ontario soybean growers.

"Fungicides are something that growers will have to deal with and become
better aware of and it may be a lot sooner than we hoped," explains Albert
Tenuta, field crop plant pathologist with the Ontario Ministry of Agriculture
and Food (OMAF) at Ridgetown.

The biggest and most widely discussed disease threat is soybean rust which,
as of September 2004, had yet to be seen in North America. "It is inevitable
that soybean rust will come into Ontario," Tenuta says. "The first
line of defense will be fungicides because there is no resistance or degree
of tolerance to this disease in any of the varieties available in North America."

Fortunately for growers, there is chemistry that will protect against this
deadly disease and the other fungal and leaf problems starting to show up in
Ontario soybean fields. With soybean acreage up another 300,000 acres to 2.3
million in 2004, it should come as no surprise that disease problems are becoming
more common. "As the industry matures and as more soybeans are grown in
a given area, we see the establishment of pests: both insects and diseases,"
Tenuta says.

"We are starting to see the development of some new diseases over the
last five to seven years." These diseases include sudden death syndrome,
fusarium wilt, stem canker as well as foliar problems such as septoria brown
spot, downy and powdery mildew, bacterial blight, cercospora and frogeye leaf
spot. These are in addition to the more traditional diseases like soybean cyst
nematode, phytophthora root rot and white mould. "Many of the leaf diseases
can be seen in most fields in the province," Tenuta says.

Help appears to be on the way, however, with at least one crop protection company
doing extensive research on the benefits of fungicides to fight foliar soybean
diseases.

The newest class of fungicide chemistry to be registered in Canada is showing
promise in soybeans according to Wayne Barton, with BASF's research and commercial
development group. He has been conducting soybean research trials with the strobilurin
Headline for the past three years. "Headline is an excellent product on
rust and is showing very good activity on other diseases as well."

BASF is also conducting work in South America, where soybean rust is present,
to determine the best fit for the product in control programs. Other leaf diseases
of particular interest to the company are downy mildew, powdery mildew, septoria
leaf spot and cercospora. Research for the 2004 growing season included a combination
of small plots looking at different application rates, timing and locations,
as well as federal research permit sites, where growers applied the fungicide.

"We are working to identify the different diseases present, determine
what kind of disease control we are getting and then look at various yield parameters,"
Barton explains. A number of other indicators related to quality (size, protein
and oil content) also are being evaluated as part of this research.

In terms of frogeye leaf spot specifically, it is a disease that first appears
as water-soaked spots on the upper leaf surfaces. As lesions develop, the centres
turn grey or light tan with reddish brown borders. "It looks like a frog's
eye," Tenuta says.

Like other leaf diseases, frogeye leaf spot flourishes in warm, humid weather.
Extended periods of wet weather during the growing season provide ideal conditions
for the development of the disease. If there is a heavy infection, leaves can
die and fall prematurely, resulting in early defoliation of the soybean plants.
With high rainfall and persistent humidity, stems and seeds can also become
infected. The disease can survive in soybean residue.

Frogeye leaf spot is characterized by light coloured lesions in
the centre and a darker reddish brown border. 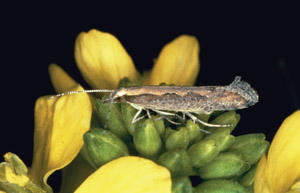 Barton is clearly looking forward to the 2004 research results: "This
year there is a bigger visual difference. The weather has clearly been a factor:
there seems to be more disease out there."

Putting the research and fungicide potential for soybeans into practical context,
Tenuta notes that "Every year there are some fields that could benefit
from fungicide applications." He adds, "That's where scouting is important
and knowing the history of your field." With the heightened awareness surrounding
soybean rust, he predicts that producers will become more vigilant scouting
fields which will make them more conscious of other diseases as well.

"Every year is a little different and every year results in different
disease pressure in different fields," Tenuta comments. Field location,
management (residue) and rotations (frequency of soybeans) all play a role in
the development of leaf diseases. As fungicides are registered for this crop,
producers will need to take into account the particular disease and its economic
impact, the stage of development (young plants are more susceptible), yield
potential and also the cost of the application, in making a decision to spray,
Tenuta says.

Moisture and humidity are critical for most of these leaf diseases to develop.
"They thrive under moderate conditions as well," Tenuta says. Leaf
diseases are of most concern when they develop earlier in the season. "Foliar
diseases can have a photosynthetic impact," Tenuta explains. In layman's
terms, this means plants are less able to feed themselves and the pods are under
increased stress, which impacts yield and makes them more susceptible to other
environmental and disease pressures.

Tenuta also acknowledges a possible link between fungicides and overall plant
health, beyond disease control. "Some producers in the US have started
to spray a fungicide for overall crop health," he says, "but the jury
is still out on these types of situations."

Barton concurs. "We are seeing some significant yield bumps in our research
that we can't always attribute to significant disease pressure. At this stage
we are not sure if they are related to the control of several minor diseases
in combination or whether these benefits are linked to overall plant health:
but we are working on it."

As for the bottom line, Tenuta believes that broader use of fungicides on soybeans
in Canada will coincide with the arrival of major new diseases. "When the
risk is elevated and you can lose 10 to 40 percent of your yield, it will definitely
pencil out," he says.