AAFC scientists are assessing risks by modelling where invasive insects could turn up next. 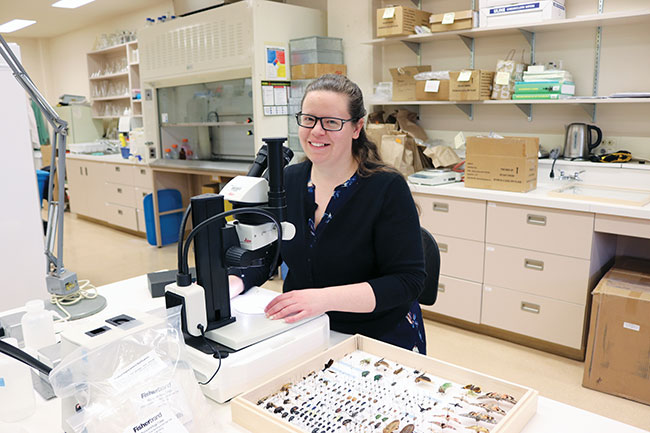 When marauding pest species arrive from other parts of the world, they can be a nightmare for Canadian farmers, capable of destroying crops and causing millions of dollars in lost yield.

One way that Agriculture and Agri-Food Canada (AAFC) scientists are responding to this danger is through a research project aimed at learning more about potential insect invaders and where they could inflict the greatest damage.

“I think that just in general, invasive species are becoming more and more of a threat,” says Meghan Vankosky, a field crop entomologist at AAFC’s Saskatoon Research and Development Centre in Saskatchewan. “It’s really important to be forward-thinking about what could be a risk.”

Vankosky is working with fellow scientists Paul Fields of AAFC Winnipeg and Peter Mason of AAFC Ottawa to develop models capable of predicting where alien insect species might establish if they become invasive to Canada.

“Knowing is very important, and once we know what the risk is, then we can invest resources to have strategies in place before the species arrives,” Vankosky says.

One such strategy would be to focus monitoring efforts on those areas where non-native insects are mostly likely to establish.

“The project is meant to be proactive and ensure that we look in the right places for invasive insects,” Vankosky says. “Early detection is key, because even if a small population becomes established, it can be very difficult to eradicate.”

The project, which started in 2018, is wrapping up this year. Vankosky says to help decide which pests to focus on for the study, the researchers consulted the Canadian Food Inspection Agency, other AAFC scientists examining invasive species, and international colleagues.

Vankosky notes that for a non-native insect species to establish itself in Canada, it has to have a plentiful food source and environmental conditions also have to be just right.

“If it’s too cold or too hot, or too dry or too wet, an invasive species might not survive in Canada,” she says.

Vankosky says the researchers have developed bioclimate models for a few potential insect threats, and for some other others, they’ve identified research and knowledge gaps that need to be filled before modelling can occur.

One of the species examined in the study was the cabbage stem flea beetle, Psylliodes chrysocephalus, an insect found in Europe which is a potential canola pest.

Vankosky says the modelling for this species indicated the insect could possibly overwinter in Canada and is most likely to establish in southern Ontario and Manitoba, where it tends to be more humid. Vankosky says drier parts of the canola growing range are at less risk of invasion but she cautions that this is only a preliminary model.

Another species the researchers looked at was the pea aphid, a potential pest in field peas, other pulse crops and alfalfa. According to Vankosky, the pea aphid is a migratory pest originating in the U.S. that comes up into southern Manitoba, Saskatchewan and Alberta every couple of years.

“We’ve done some modelling with that to see if it could overwinter here or not,” Vankosky says. She stresses the results are preliminary, but they show that the pea aphid is not likely to withstand Canadian winters.

A potential soybean pest, the Kudzu bug, was also studied to assess whether it could survive in Canada if it migrated north from the United States. Vankosky says the research hasn’t reached the modelling stage due to a lack of solid information about the insect.

“That one is definitely still a work in progress,” she says.

Vankosky says canola and other Brassica oilseed crops may be a little more at risk for invasive insects because they’re part of a very diverse family of plants.

“Most of the really serious insect pests that eat canola and its relatives are well adapted to feeding on that particular plant family,” she says. “But really, any crop could be damaged by a number of different species that are potentially invasive.”

Vankosky notes that once an invasive insect gets a toehold in Canada, it can become a pest very quickly due to a lack of natural predators which could act as a population check.

“If they can survive the local conditions here, then they probably don’t have anything that eats them, or the predators that are here might not recognize this new insect as something they can eat,” she says.

To make matters worse, producers may be stuck with few control options that could slow the invading insect’s spread and reduce the impact on their farm. 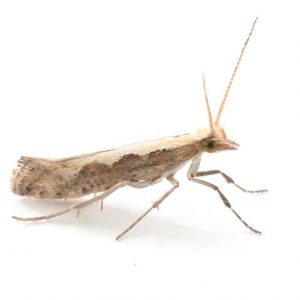 The diamondback moth, an invasive insect that feeds on canola and other Brassica species, migrates into Canada from the U.S. fairly often. Agriculture and Agri-Food Canada researchers are studying two parasitic wasps that could possibly be used as biocontrol agents against the pest.Photo courtesy of Jonathan Williams, Agriculture and Agri-Food Canada. 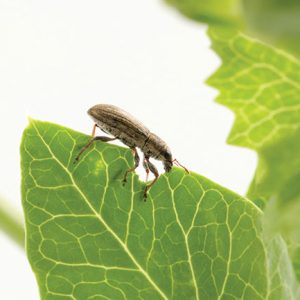 “They’re new, so farmers in Canada have never had to deal with them before. It could be that there are no registered insecticides available to use against them here, just because they’ve just never had to be managed in Canada,” Vankosky says.

She adds that looking at how invasive insects are controlled in the place they come from can help, but it isn’t always the answer.

“In some cases, the insects that are invasive in Canada are not pests or are minor pests where they came from, because they are managed by their natural enemies,” Vankosky says. “There isn’t any information on how to control these species using insecticides because insecticides are not needed where the insects originated from.”

As part of the project, the AAFC researchers are also studying the natural enemies of some invasive insect pests to see if they could be used as biocontrol agents.

“In other parts of the world there are potential predators of some of these emerging pests that are also present in Canada,” Vankosky says. She notes that one of these invasive species is the diamondback moth, which feeds on canola and other Brassica species.

“It’s not something that necessarily overwinters in Canada, but it does migrate in from the U.S. quite often. It has become more of a pest in Canada because of the prevalence of canola, so we’re looking at two parasitoids of the diamondback moth,” Vankosky says.

The parasitoids – Diadromus subtilicornis and Diadromus collaris – are parasitic wasps that lay their eggs in diamondback moth larvae and then eat the caterpillars when they hatch.

According to Vankosky, Diadromus subtilicornis is already present in Canada and Diadromus collaris, which is found in Europe, is not.

Vankosky says Diadromus collaris is being studied to learn more about its biology and its temperature restrictions to see how they match up with climate conditions in Canada in order to determine if they could survive here or not.

Once this project wraps up, Vankosky is hoping to continue working on gaining a fuller understanding of the biology of potential pest threats. She says that’s important because it can help inform management decisions for any invasive insects that do manage to establish in Canada.

“Understanding the biology and population ecology of invasive insects is very important in terms of developing models, managing the insects, and estimating their potential impact. It’s the biological information that really underpins pest management.”