Features Corn Fertility and Nutrients
If your corn plants could talk . . . 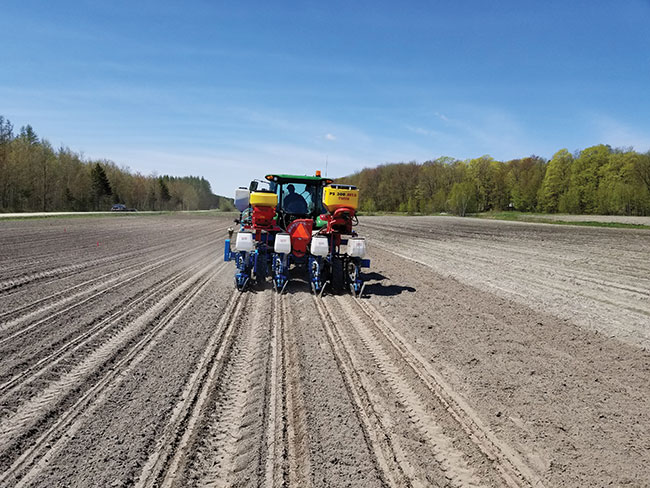 A project to develop a better way to determine in-season nitrogen needs for corn is comparing various fertilizer options, including different rates and sources at planting. Photos courtesy of Gaétan Parent.

Applying some nitrogen (N) fertilizer at planting and some in-season can be a good option for corn production, helping to meet the crop’s late-season N needs and reducing the risk of N losses to the environment. However, as growers know, accurately assessing just how much N to apply in-season – to meet but not exceed the crop’s requirements – can be tricky.

Now, Gaétan Parent is leading an Agriculture and Agri-Food Canada (AAFC) project on an alternative method for determining in-season N needs. The project team is evaluating this method under Quebec and Manitoba conditions and adapting it to provide an easy, rapid, effective tool for growers.

“With nitrogen applications, there is no one-size-fits-all. When we do studies on the 4Rs of fertilizer management – right source, right rate, right time and right place – we always have a limited number of sites over a limited number of years. So we’re not going to experience every possible situation out there. And we find that certain sites will respond in certain ways in certain years, but that could change dramatically from site to site or from year to year,” notes Curtis Cavers, an AAFC agronomist in Portage la Prairie, Man., who is co-leading the project.

“That’s why we’re focusing on developing a tool for growers to help inform their decisions about how much nitrogen, if any, to add in-season to either meet their crop’s yield potential in good growing conditions or minimize their costs in less than ideal growing conditions.”

A plant-based approach
The project, which started in 2018, initially focused on a plant-based method called the Nitrogen Nutrient Index (NNI) to determine in-season N rates.

“In Quebec, growers usually base their in-season N applications on a soil nitrate test called PSNT (pre-sidedress nitrate test). But in the scientific literature, the results with the PSNT approach are not necessarily always conclusive,” says Parent, who is a senior soil resource specialist with AAFC in Quebec City.

“NNI was originally developed in France. Based on the work carried out by colleagues here in Quebec and other researchers in France, we think this plant-based approach is probably better than PSNT for determining the soil’s capacity to provide nutrients, such as nitrogen in our case. In my view, a plant-based approach is probably a better way of really well integrating all the processes that are taking place in the soil.”

One of the project’s objectives is to compare NNI with PSNT to see if NNI would be a more accurate predictor of in-season N needs for corn. Another objective is to make this plant-based method easier for growers to use. To determine NNI, scientists have to collect all the above-ground biomass in one to two metres of a corn row and then conduct time-consuming lab analyses to measure the plant’s N content and the amount of biomass.

Parent says, “We know that nobody would do this in a real-life farm situation. So we are working on a way to rapidly determine NNI directly in the field using Crop Circle, an optical sensor that measures certain light wavelengths reflected by the crop canopy.”

He explains that the sensor data makes it possible to calculate more than 50 different indicators related to plant health. The researchers can try out those indicators to see which one correlates best with the NNI results obtained by the rigorous scientific method.

Another practical concern with NNI is that it is more accurate if the corn is sampled at the V12 growth stage. But is V12 the best time for in-season N applications in Canadian corn crops?

“We want to find out, if we apply the in-season N application in corn that much later than farmers usually do in Quebec and Manitoba, are there any advantages or are there maybe some issues with N efficiency and corn yield?” Parent notes.

“Also, instead of making the prediction at V12, we want to see if we can make as accurate a prediction at V8. A V8 timing would be better for farmers who don’t have high-clearance equipment for applying fertilizer at V12.”

As well, the researchers are determining the tallest corn height at which conventional height tractors and fertilizer spreaders could be used to apply N on corn without reducing corn yields. 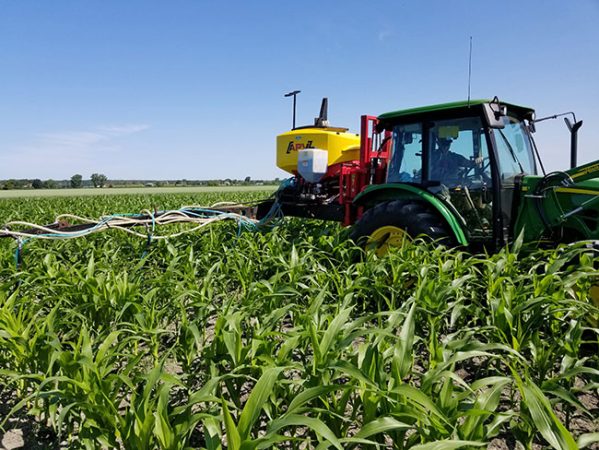 The project team adapted some existing equipment to provide higher clearance for applying fertilizer later in the season on their plots.

Assessing tool performance
“We are trying to include as many different conditions as possible in our field experiments to be sure that our tool will be fully efficient under those varied conditions,” Parent explains.

So the project’s Quebec sites are selected to encompass a range of climate and soil conditions, as well as different management practices, like no-till versus conventional tillage, manure versus no manure application, and continuous corn versus a crop rotation. He says, “We usually try to have a site near Montreal, a site in Sherbrooke, a couple of sites between Montreal and Quebec City, and some sites around Quebec City.” The number of Quebec sites varies somewhat from year to year.

The field experiments involve replicated plot trials with various fertilizer management options for an N application at planting and an in-season N application.

For the N applications at planting, the treatments include: no N fertilizer, as a check treatment; 50 kilograms (kg) of N per hectare (ha) applied as calcium ammonium nitrate (27-0-0); 50 kg/ha of N applied as UAN (urea ammonium nitrate, 32-0-0) with Agrotain, a urease inhibitor; and 75 kg/ha of N as UAN with Agrotain. The 75-kg/ha treatment is included just to be sure that the corn is not suffering from an N deficiency if the crop has to wait until V12 to receive the in-season application.

As an alternative to buying high-clearance equipment, Parent’s team has adapted some existing equipment. He explains, “We modified a fertilizer spreader equipped with folding ramps (for legal road transport) on which we installed a pneumatic seed drill equipped with GPS speed control. We then mounted this equipment on a hydraulic elevator mounted on the rear three-point linkage of the tractor. This elevator allows us to spread fertilizer as if we were using high-clearance equipment. Finally, we installed a liquid fertilizer pump, which is controlled directly from the tractor cab.”

The experiments to evaluate the use of conventional equipment for applying in-season N are taking place at a site near Quebec City. In 2019, they drove a conventional tractor with only 22.5-inch clearance at the front axle through different corn heights (60 centimetres to 1.6 metres) and at different speeds (5 and 10 kilometres per hour).

Originally 2020 was to be the project’s last field season, but
COVID-19 restrictions really reduced the amount of work that could be done this year. The researchers are hoping to extend the project for one more year. “We have some interesting results so far, but to be sure of our findings, we would need more experimental sites,” Parent says.

In addition, he hopes to work with some Quebec corn growers on this topic next year, as part of AAFC’s Living Laboratories initiative, which brings together farmers and researchers to develop, test and adopt innovations in sustainable agriculture. 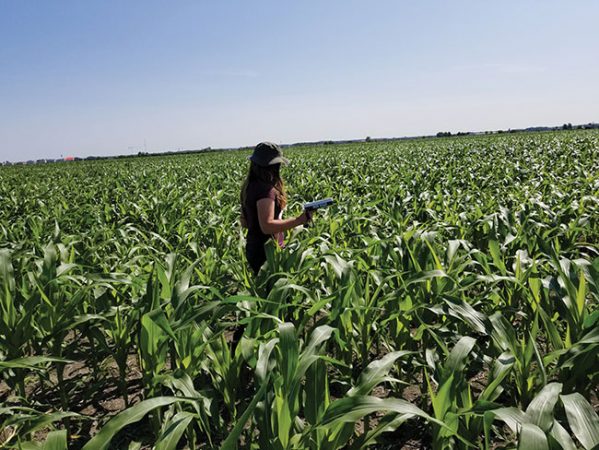 The researchers are working on a way to rapidly determine in-season nitrogen needs using a hand-held Crop Circle optical sensor.

Some preliminary findings
Parent and Cavers will be analyzing the limited 2020 data in the coming months.

So far, based on the Quebec data from 2018 and 2019, NNI at V12 seems to be a fairly reliable way to predict the optimal N rate. Using the Crop Circle data from 2019, the team has identified an indicator that looks promising as an alternative to the rigorous NNI measurement. More data collected under a wider range of growing conditions would help to fine-tune the relationships between optimal N, NNI and the indicator.

Regarding the use of conventional height equipment to apply in-season N, Parent says, “In our experiments, we found that yield started to be reduced when the corn was 1.2 metres high. For corn heights from 0.9 to 1.2 metres, the plants were slightly tilted after the tractor’s passage, but they returned to normal after a couple of days. We did not find any differences between the two speeds.”

He notes, “A corn height of 1.2 metres is close to the optimum corn growth stage – about V10 to V12, depending on the hybrid and growing conditions – at which it may be possible to assess corn N status using a plant-based method. So this is a positive result, with lower investment required by farmers for in-season N application in corn.”

In addition to helping to develop a better way to determine in-season N needs, the field experiments with the different N treatments are also adding to the overall understanding of 4R management for corn production in Quebec and Manitoba.

He adds, “Other teams in Quebec are also studying the impact of time of nitrogen application on corn. And to the best of my knowledge, they are getting basically the same results that we are getting.”

The timing results are somewhat different for the Manitoba sites. “In Manitoba, we are finding that if you leave things too late, like a V12 timing, the nitrogen application doesn’t contribute to corn yield. The N is just left in the soil, and so we have a high residual soil nitrate test going into the fall. And of course, higher nitrates in the soil are prone to losses before the next crop can use them up,” Cavers says.

“We are finding that it is often better to put more N on earlier in Manitoba. So you apply some nitrogen at seeding and then some supplemental N at V4 or maybe up to V8. However, there is a fair bit of year-to-year and site-to-site variability in our results.”

Another interesting finding for both Quebec and Manitoba is that the optimal N rates tend to be lower than expected.

“When people first got into growing corn here in Western Canada, they figured that you needed lots of N to get high yields. But from this trial and many others conducted over the last number of years, corn doesn’t need as much nitrogen as originally thought. We’re finding that, generally speaking, you need around one pound of nitrogen per bushel of yield, and in some cases you can even get below that if you are really efficient with your nitrogen. But that can really vary,” Cavers says.

Parent has seen similar patterns in the Quebec data. “The optimal amount of nitrogen fertilizer is often lower than we might expect. For example, at some Quebec sites, the optimal N rate at V4, V8 or V12 was about 100 or 120 kilograms of N per hectare, with no benefit from going higher than that. But again, it depends. On some sites the optimal rate may be 150. On other sites, we may not even need to apply any fertilizer at V4. There is a huge variation.”

Cavers emphasizes, “Nitrogen management is not as simple as a recipe. And that brings us back to why we’re doing what we’re doing as our primary objective: developing a methodology that producers will be able to use to make their own decisions on whether it is worth putting on additional nitrogen or whether it is worth holding off, based on the yield potential and growing conditions in-field.”