The cabbage seedpod weevil’s love affair with canola appears to be headed for a major battle, thanks to a concerted effort from scientists at Agriculture and Agri-Food Canada (AAFC). 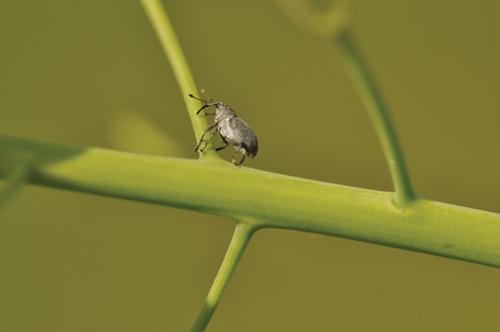 The invasive pest is the subject of a four-year project aimed at minimizing the damage it causes to canola. Given that this damage amounts to up to 35 per cent reduction in yields across Canada, AAFC is determined to rise to the challenge.

In addition, they’ve collaborated nationally and internationally with scientists at the University of Alberta and CABI Europe-Switzerland.

Classical biological control
In Europe, natural enemies have provided reasonable control of the cabbage seedpod weevil, which is why scientists are looking to the classical approach for Canada. Classical biological control involves introducing a beneficial insect to control a pest insect. By releasing one or more natural enemies for the biological control of cabbage seedpod weevil as part of an integrated pest management program, AAFC researchers aim to reduce yield losses in canola while preventing any increase to pesticide inputs.

The most promising biocontrol agent is a tiny wasp, a parasitoid that eventually kills its host. But before considering any foreign parasitoid, AAFC researchers studied our native parasitoids and their impact on cabbage seedpod weevil infestations. The results were not promising; in 2008 and 2009, field collections indicated that native parasitoids were having minimal impact on weevil populations.

A work in progress
With a couple of years left in the national research project’s timeline, scientists are zeroing in on several goals. One is to generate baseline data on the mortality factors of the immature and adult stages of the cabbage seedpod weevil on canola in Ontario. This involves studying how many weevils die at each stage of life – larvae, pupae and overwintering adults — to see when they’re most vulnerable.

Another goal is to study the various tiny parasitic wasps from Europe (in the one-millimetre size range) that could play an important role in minimizing cabbage seedpod weevil populations in Canada. One in particular – Trichomalus perfectus – is of particular interest to the AAFC researchers because of its relative success in Europe’s control of the pest.

Non-target studies
Additionally, in their efforts to make sure that the parasitoid only attacks the targeted pest, researchers are studying the possible effect of parasitoids on native species. “The pest has been well studied. We know its biology very well,” explains Dr. Mason. “But we don’t have detailed biology of the non-target species. We need to know if they occur in the same habitat as the cabbage seedpod weevil, and if so, there’s a good chance they’ll be attacked by the parasitoid too. We need to know if introducing the parasitoid will have a spill-over effect.” With increased environmental awareness and recognition of the importance of preserving biodiversity, the results of this study will be closely monitored.

Bringing a new parasitoid into Canada requires a rigorous protocol. The past two decades have seen vast improvements in these procedures. Regulatory agencies such as the Canadian Food Inspection Agency need detailed data on what constitutes a host range (number of species an insect feeds on), how you assess it, and what negative impacts might result from an insect feeding out of its host range, before allowing the introduction of a foreign insect into the country.

Canadian canola
Canola has established itself as a major player on the agricultural landscape since storming out of federal labs a few short decades ago and now rivals wheat as the largest and most profitable field crop grown in Canada. Since its introduction, it has grown by leaps and bounds; according to the Canola Council of Canada, it now adds $13.8 billion to the economy and generates more than 216,000 jobs in the country.

Cabbage seedpod weevil
The name of this invasive pest comes from its habit of feeding on cruciferous crops, also known as Brassicaceae, a family that includes cabbage, canola and wild mustard. With a life span of around one year, a single adult just three millimetres in size can produce hundreds of eggs. This pest particularly impacts winter canola but can also impact early-planted spring canola.

The life cycle begins in early May when adults that have overwintered in the soil emerge. They then fly to flowering canola and begin feeding on the floral buds. When the seedpods develop, the females lay eggs in the seedpods. The eggs hatch into larvae that feed on the seeds and then drop onto the soil and pupate. It is the larvae feeding on the developing pods that cause the damage. About 20-30 percent of the seeds in a pod can be damaged and seed weight can be reduced by more than 16 percent.

“With increases in temperature due to climate change, there will potentially be a longer breeding season and better overwintering survival,” Dr. Broadbent explains. “This would exacerbate the damage done by this weevil in areas that it presently occupies and it will spread into new localities.”

In Eastern Canada, canola is currently grown in Ontario and Quebec. In Ontario, the main production is in a triangle from Owen Sound to London and Guelph, and occasionally fields farther east. In Quebec, the primary acreage is south of Quebec City and in the Lac Saint-Jean area.

Monitoring the damage
In Canada, the cabbage seedpod weevil was first detected in British Columbia in 1931. It was later confirmed in Alberta in 1995 then spread eastwards into Saskatchewan in 2000 and was eventually found in Ontario in 2001. A separate introduction was also detected in Quebec in 2000.

The exact damage done in Ontario and Quebec by the cabbage seedpod weevil is hard to quantify. The only way scientists can monitor this invasive pest is to do sweepnet counts, a time-consuming process that puts them in the field to hand-sweep the crop, observing any damage and counting the weevils they gather up.

“When a pest insect like the cabbage seedpod weevil comes into a new country or area without its parasites and predators, it has a huge advantage,” explains Dr. Broadbent. “With an invasive species, the key is finding its natural enemies in the country of origin.”

What’s next?
According to AAFC researchers, anywhere the cabbage seedpod weevil is found in Canada, the biological control (parasitoid) will definitely have an impact. “We already know that classical biological control of pests of crops works,” says Dr. Gillespie. “We will now have to focus on modifying pesticide applications to conserve parasitoids when they are active in the field.”

A lot of progress has been made but AAFC will need to move forward with care as it takes all the necessary precautions before introducing a new species. The wait will be worth it though, as AAFC science is showing that within the near future the cabbage seedpod weevil will meet its nemesis.