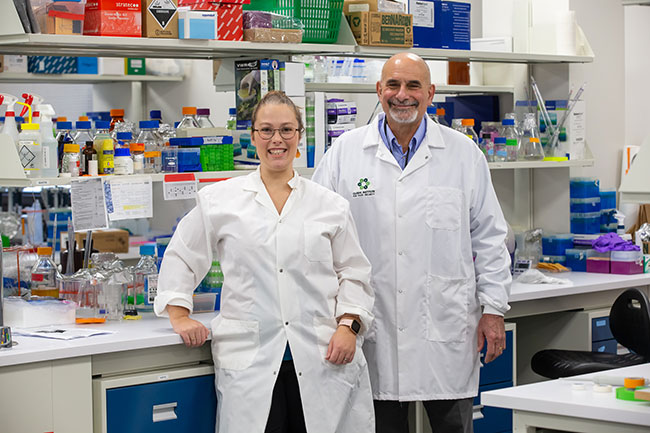 Joanne Ernest and Leon Kochian in their Global Institute of Food Security lab at the University of Saskatchewan developing early-sown crops adapted to cold Prairie soils. Photo courtesy of Get My Photo.

“In talking to farmers, they are looking for ways to reduce the risk of growing soybean in Saskatchewan and to expand the profitable growing region,” says Joanne Ernest, research associate with the Global Institute of Food Security (GIFS) at the University of Saskatchewan. “Anecdotally, extending the growing season by one week should be sufficient to turn soybean into a profitable crop in Saskatchewan and Alberta. To do that, we need to either shorten the maturity of soybean or somehow expand the effective growing season. There are several people in the world working on reducing maturity, but there can be a yield penalty to a shorter maturity time. Therefore, we wanted to approach it from a slightly different angle by trying to extend the growing time by getting the seeds in the ground earlier.”

In a new three-year GIFS project launched in 2020, a collaboration between Ernest, whose research focus is on seeds and germination, and Leon Kochian, associate director of GIFS and Canada Excellence Research Chair in Food Security with research priorities in root growth and seedling establishment, are developing seeds for cold Prairie soils. Funded jointly by ADF and GIFS, the project brings together their two independent projects to screen extensive panels of soybean for genotypes which can germinate and grow in cold soils. Traditional breeding is not equipped to investigate below-ground traits such as fast or cold-tolerant germination and seedling root growth. This project will identify genes, proteins and genetic markers that are associated with cold-enabled germination and root growth.

“By developing soybeans that will germinate and thrive earlier in the season, we can extend the growing time before potential fall frosts,” Ernest explains. “Seeding earlier in the season means addressing the risks of seeding into cold soils that can have impacts on germination, emergence and especially root establishment that ultimately increase the time to maturity and reduce yield. Cold soils can also expose the seed to increased soil pest and pathogen attack, impacting rate and uniformity of seedling emergence. We also wanted to look at mitigating the risk of early sowing of canola. We thought that looking at these two crops side by side allows us to focus on an established crop like canola alongside soybean, a relative newcomer to Saskatchewan. Early sowing of both canola and soybean could result in a number of benefits to producers, including optimal flowering and seed-filling stages during the moist summer period, and reduced risk of frost damage in the fall. Harvesting can also be moved forward, often meaning better harvesting conditions and improved yields.”

In the first stage of the project, researchers are screening about 200 soybean lines for cold tolerance at both the germination and root growth stages. The team is working with François Belzile at Université Laval in Quebec, who has provided a specially designed soybean genetic mapping population that captures most of the diversity available for short-season soybeans. “Dr. Belzile recently led a large Genome Canada project called SoyaGen, which focused on molecular and quantitative genetics and has genotyped millions of differences in DNA sequencing for maturity genes or genetic markers,” Kochian says. “We are finding a lot of genetic variation from phenotyping this soybean population and suspect that some of the cold-tolerant seeds that have cold-tolerant roots may be due to the same genes. However, in other cases we are certain there will be a separate set of genes, because germination, and root emergence and growth are very complex integrated processes.” 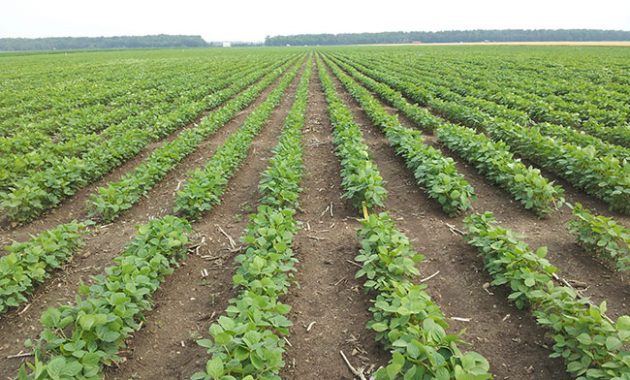 Once lab tests are complete, soybean and canola will be evaluated in cold-soil field trials in Saskatoon. Photo courtesy of the Irrigation Crop Diversification Corporation.

The researchers are also conducting similar screening work with canola, using a large, complex and diverse genetic population with lots of genetic markers developed by Sally Vail, oilseed breeder at Agriculture and Agri-Food Canada (AAFC) in Saskatoon. They are screening the population for both variation in germination under low temperatures and for seedling development and root and shoot growth at low temperatures. Kochian adds doing this genetic analysis on trait variations using very sophisticated genetic analysis computer programs allows them to scan the whole DNA genome of both soybean and canola. This helps to narrow down the genome to very discrete regions where these genes reside that confer this variation in traits and increase in tolerance. This can lead to the identification of gene-specific markers that can help speed the breeding for cold-tolerance through marker-assisted breeding.

Along with the genomics approaches, Ernest is also adding a proteomics approach to look closer at the proteins involved in germination. “The genome encompasses all of the genes in a sample of the tissue, while the proteome of the seed includes several proteins that affect germination, many of which are laid down while the seed is maturing. Sometimes looking at the genes that are switched on at that time is less useful than looking at the proteins that are present. This work is being done in collaboration with AAFC in Morden, Man. We are also collaborating with AAFC in Saskatoon and the Crop Development Centre on field trials. One of our goals is to not only have germination and root growth capability at lower temperatures, but also faster germination and root growth that can help protect seedlings from pathogen attack by speeding up emergence and establishment.”

Kochian, who has researched the role of roots and root biology to crop adaptation to soil-based abiotic stresses for many years, is using a hydroponic system for screening root phenotypes. This allows for screening thousands of plants a day, measuring root growth from digital imaging. “We have combined hydroponics with a thermostated chiller in the lab that lets us screen seedling growth at low temperatures between 10 C and 12 C,” he adds. “We are seeing significant variation in tolerance from lines with short to very long roots in the first week or two at low germination and seedling growth temperatures. Roots are very sensitive to soil temperatures and tend to slow down their growth in the cool soils. In the first week after seeding, the plant is almost all root and hardly any shoot. The roots need to get established to take up nutrients and water to really get the seedlings growing. We are trying to improve the tolerance of seeds, roots and seedlings to a range of abiotic stresses including cold stress. By selecting the most vigorous, healthy seedlings, they may also have a better chance of fighting off biotic stresses, such as diseases.”

Once the screening and testing is completed for cold tolerance of soybean and canola at both the germination and root growth stages, the results will be evaluated in field trials under cold soils by plant breeding collaborators including Sally Vail at AAFC and Tom Warkentin at the Crop Development Centre in Saskatoon. The varieties that successfully establish in cold soil field trials, along with relevant genetic markers, can then be used to transfer the cold tolerance trait into elite varieties, generating high performing, early sowing crops for Saskatchewan producers.

“We don’t know yet what the limitations will be, but as we keep screening and searching for the genes and if the genetic variation is there, then we can see how far we can push out into suitable growing regions further north into Saskatchewan and Alberta,” Ernest adds. “If we can reduce the risk of seeding in cold temperatures and mitigate the potential losses due to early frost to grow soybeans successfully, then they are a wonderful crop to add to a rotation. These same benefits will also help established crops such as canola achieve better growth and yields. We are working towards developing early sown crops adapted to cold Prairie soils that will reduce risk for producers and extend the growing season for crops.”


Related
Are the ‘Seedrow N Guidelines’ reliable in cold and wet no-till soils?
Is it too cold to plant soybeans?
Nutrient requirements and prairie soils
How cold temperatures will affect cereal crops