The early bird gets the worm. Although growers and researchers know that early spring seeding can help improve yields of a number of crops, the question of how early and how much can be difficult to assess. Researchers at Alberta Agriculture and Rural Development (AARD) in Lethbridge conducted a four-year project at two locations to determine the optimum seeding date and rates for achieving high yields and quality in 11 irrigated grain and oilseed crops. The results will help growers optimize yields of irrigated crops.

The trials were conducted at AARD’s Lethbridge Research Centre in the Dark Brown soil zone and at the Bow Island Substation in the Brown soil zone, from 2006 to 2009. “We selected 11 cereal and oilseed crops predominantly grown under irrigation in southern Alberta and seeded on four different seeding dates,” says Dr. Ross McKenzie, research scientist, agronomy, with AARD in Lethbridge. “We’ve known for years that if you seed earlier you can usually do a little better, but if you seed later your yields are a bit lower. But we didn’t know how much, so this study was an opportunity to find out.”

In each year, the crops were seeded in the second or third week of April through to the end of May, usually 10 to 14 days apart, depending on weather conditions. The crops were also seeded at five different seeding rates. During the season, irrigation water management was kept at an optimum.

By seeding earlier in the spring, crops have access to more available solar radiation or sunlight while the days continue to get longer until the third week of June. “All of the cereal and oilseed crops we grow are cool season crops and by seeding earlier, the crops get better vegetative growth in May and June when days are longer and temperatures are cooler,” says McKenzie. “The earlier seeded crops generally start flowering in late June, before the hotter weather that typically comes in July.” For example, canola yields can be reduced considerably when temperatures are above 30 C during flowering.

Crops seeded earlier tend to use water more efficiently than those seeded later and are more competitive with weeds. Earlier-seeded crops are usually more advanced by the time most insect and disease problems begin to appear in early July, and are often better able to withstand the impacts versus later-seeded crops. For example, fungal foliar diseases such as leaf rusts tend to be less severe for early seeded crops.

Overall, seeding date had a bigger impact than seeding rate on crop yield or quality. However, crops such as triticale and soft white spring wheat required considerably higher seeding rates to achieve higher yields than some other cereals.

“Sometimes all wheat varieties or all barley varieties are treated the same; however, they are not,” notes McKenzie. “For example, CPS, durum and soft white spring wheat all have higher yield potential, and by going to a higher seeding rate [growers] can make a significant difference in yield. With hard red spring wheat, on the other hand, the yield potential isn’t as high, and going to higher seeding rates doesn’t necessarily translate into higher yields. We suggest that most growers will want to use the middle to upper zone of seeding rate ranges to achieve optimum yields.”

When deciding the order for seeding crops, growers need to assess the economics, risk and timing. “In a year where seeding early is an option, growers should seed their highest value cereal crops with the highest yield potential first in April and then start seeding canola closer to May 1 to avoid the risk of frost,” says McKenzie. “However, if weather delays spring seeding until early May, then seed the most valuable crops first, such as canola, then wheat and then barley. If seeding is delayed, selecting early maturing cultivars may be beneficial. Every spring will be a bit different, so try to seed the most valuable crops with the highest yield potential first, but keeping in mind crops like canola and the considerations for risk of frost.”

Overall, early seeding and sufficient seeding rates are two important agronomic strategies that may help growers achieve high crop yields under irrigation in southern Alberta. Researchers have been asked similar questions about optimum seeding rates, early seeding and yield loss potential under dryland conditions, and McKenzie would like to do more research in that area to be able to provide similar detail for those growers in the various soil and climatic areas across Alberta. 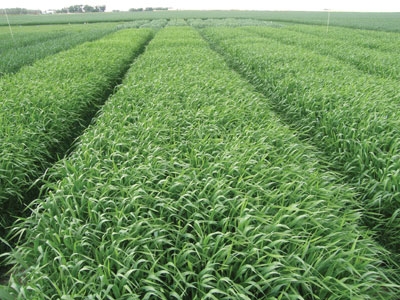