Most eastern Canadian producers have considered whether tile drainage is right for their operations. According to Harold Rudy, executive officer of research and business development for the Ontario Soil and Crop Improvement Association (OSCIA), more than 50 per cent of the agricultural land in southern Ontario is tile drained. In many areas of the province, tile drainage facilitates timely field operations and helps decrease the risk of crop damage during heavy rainfall events. 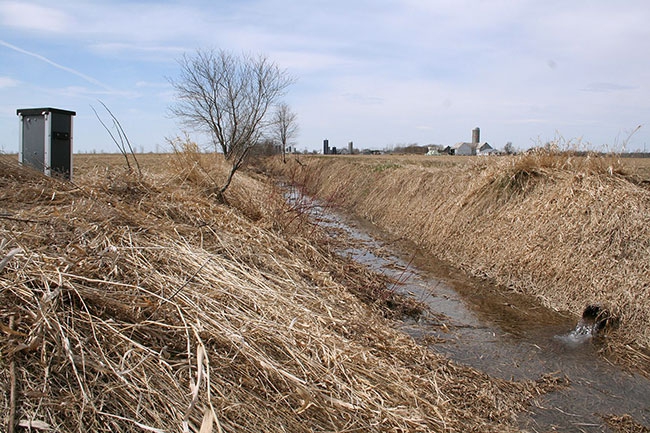 Farmers in Ontario have seen three to seven per cent yield increases through the use of control structures to manage moisture in their fields. Most eastern Canadian producers have considered whether tile drainage is right for their operations.

But researchers are suggesting there can be yield benefits to retaining some of the water escaping through the tiles during the growing season through the use of water flow control structures added to tile drained systems.

“Researchers at Agriculture and Agri-Food Canada [AAFC] have been working on this for a number of years, but we haven’t paid enough attention to the benefits,” Rudy says.

AAFC, OSCIA and the University of Ottawa are working together on a new project to evaluate how using control structures in tile drained systems during the growing season can increase yields, minimize nutrient losses and increase the health of watersheds.

The project began in late 2016 and will continue for one to two years, Rudy says. OSCIA’s role in the project is to manage AAFC funding and co-ordinate outreach efforts.

A team from the University of Ottawa, led by Michael Sawada, a professor in the department of geography, environment and geomatics, will utilize field data to develop a tool that will assist extension staff and producers in calculating the benefits of tile drainage control structures.

David Lapen, a research scientist with AAFC, says the team will work with producers who installed tile flow control structures in a co-operative project with AAFC in 2005. A large amount of data has been collected over the past decade that shows economic benefits and yield boosts associated with tile drainage management, Lapen says, and the team wants to use plot and field data already collected to scale up to the watershed level.

Lapen says farmers have seen three to seven per cent yield increases, on average, through the use of control structures to retain water during the growing season, but there are some major environmental benefits as well.

Farmers in Ontario have seen three to seven per cent yield increases through the use of control structures to manage moisture in their fields.

How it works
Lapen says all of the farms his team has worked with have retrofitted control structures onto existing tile drainage systems.

“The ideal situation is that you have tiles and laterals coming into a main header and then the header intersects an outlet into the stream. So we put a structure on the header outlet so we can manage the field drainage,” he explains.

“These control structures are operated with stop-gates, like a dam, and when the groundwater level gets too high, tile drainage occurs. We keep the stop-gate upper level at approximately 60 centimetres below the surface. When the water levels rise above that point, water is allowed to drain out of the field,” Lapen says.

“You’re not stopping flow all the time, you’re allowing for overflow and drainage release during those conditions so you don’t damage crops. Tile drainage stops when the water level is below that point, and you then retain that water in the field, allowing the crops to access that moisture.”

In the spring, during or immediately after field operations, when producers are comfortable with the level of moisture in the fields, they head to the control structures and shut down the gates to conserve water. In the fall, prior to harvest, they return to the structures and open the gates to release water to conduct fall field activities.

Gates may also require opening during periods of excess moisture, such as severe rainstorms, during the growing season.

Depending on the size and depth of the outlet or access point, Lapen says it can cost producers around $1,000 to install a control structure. But that’s an investment producers can earn back in a few years as a result of yield boosts.

A new study out of North Dakota supports the use of control structures for agronomic reasons. The study investigates the response of hard red spring wheat (HRSW) to soil water management through the use of controlled tile drainage for yield, disease and other agronomic characteristics.

Grant Mehring, an assistant professor with North Dakota State University’s department of plant sciences and the study’s author, says there can be major benefits to closing drainage tiles when crops are thirsty.

In his study, Mehring saw an approximately three bushel per acre yield benefit in HRSW when the crop was allowed to use the water it needed during the growing season.

“Yield is the most important factor, but we also saw that there was slightly lower incidence rate of Fusarium head blight in the fields when we had closed tile systems,” he says. Obviously a producer’s number one control measure for leaf diseases is fungicide, but the result has interesting implications for future research – and is a promising indicator that water management can have multiple agronomic benefits.

“Our recommendation is that when you’re thinking about installing tile on your farm, give consideration to the added cost of putting in control structures,” Mehring says. “There are times in the season where it would actually pay with higher yields if you keep all of the water that ends up coming from rainfall in your fields, instead of pumping that excess water out.”