When it comes to harvesting a short-rotation woody biomass crop, farmers already have a choice of several proven high-, medium- and low-cost equipment options. What is interesting about biomass harvesting, though, is that optimal harvesting of the crop takes place in winter, so it doesn’t conflict with normal agriculture cropping activities.

“We’re evaluating the different options that are available for short-rotation woody biomass harvesting and demonstrating them to potential users, practitioners and stakeholders,” says Derek Sidders, CWFC regional co-ordinator for the Prairies.

“When looking at the whole supply chain, this demonstration shows that we can not only grow short-rotation woody crops, but we also have the technology to recover [the biomass].”

Differences in the technology

There were a number of differences among the three technologies demonstrated. The Claas harvester and JF 192 harvester both produce wood chips, but the BioBaler produces round, woody stem bales, similar in appearance to straw round bales. All, however, showed no difficulty harvesting the four- to six-centimetre-thick willow and hybrid poplar stems they encountered during the demonstration.

When it comes to selecting the most appropriate harvesting option, Sidders says individuals need to consider what the most operationally appropriate and cost-effective technology is to provide the raw material for their desired end product, and consider which technology best matches the scale of the area slated for harvesting.

The Claas harvester is designed to work on commercial plantations only, and it both cuts and chips the wood fibre. It can harvest as much as one hectare per hour. It was also the most expensive technology demonstrated, so a fairly large-scale operation would be the most appropriate. It harvests two rows at a time, and requires an accompanying wagon to travel with the harvester to receive and transport the chips.

The BioBaler mulches the stems and produces a round bale similar in appearance to a hay bale that weighs between 300 and 400 kilograms wet. It requires a 180- to 220-horsepower tractor to power and pull the implement. It can be used on commercial plantations, or to harvest understorey or juvenile stems in natural forests. The bales can be stored on site and will naturally dry. The bales may require further pre-processing before the raw material can be used as feedstock. The BioBaler can harvest any plantation design.

At the Manitoba demonstration, 35 participants watched the WB-55 BioBaler harvest second-generation, short-rotation, concentrated woody biomass on a 60-hectare afforestation site on the outskirts of Winnipeg. Organized by Manitoba Conservation and Tim Keddy, CWFC wood fibre development specialist, in co-operation with the landowners, Peter and Irene de Graff, the harvesting demonstration profiled the harvest and baling of several clones of hybrid poplar and willow up to 12 centimetres in diameter. The recovered bales were used in an industrial wood boiler.

The JF 192 single-row harvester on its own is the less expensive option, but it also works at a slower pace. Manufactured in Brazil for harvesting sugarcane and corn, it has been adapted for harvesting and chipping willow, and is currently being used successfully to harvest woody fibre. It also requires a tractor for power and transportation, and must be accompanied by a chip wagon to receive and transport chips.

The results
In summary, the Claas 870 Jaguar Harvester with HS-2 head attachment is self-propelled and produces wood chips. It is a two-row harvester, requires an accompanying chip wagon, operates at 8-10 km/h, and works in commercial plantations. Claas has several operating units, particularly in Europe.

The Anderson Group WB-55 BioBaler produces 300- to 400-kilogram wet round bales. It is a pull-type implement that requires 180- to 220-horsepower tractor for movement and power. The bales are loaded and transported using standard agriculture round bale technology. It works in commercial plantations or natural forests, and there are 10 to 12 units operating worldwide.

The JF Maquinas 192 Harvester produces wood chips. It is a tractor-mounted (three-point-hitch) implement requiring a tractor for movement and power. A single-row harvester, it works in commercial plantations, and there are 10 units operating in Europe. 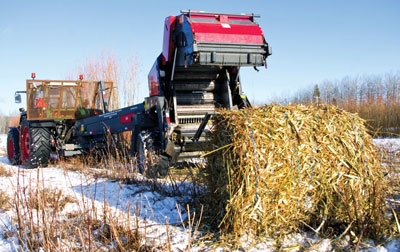