You’ve scouted and know what weeds are present in your fields. You’ve paid attention to what weeds are prevalent in your region. And you’ve used an integrated management strategy that combines treating with the recommended modes of actions and using cultural practices like planting clean seed, controlling weeds along field edges and tilling to discourage weed germination. 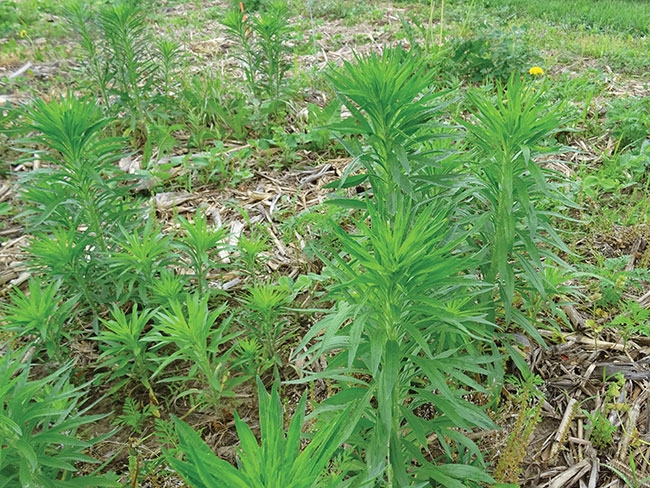 Dave Bilyea is working to determine how weeds like Canada fleabane spread from field to field. You’ve scouted and know what weeds are present in your fields.

Yet weeds keep popping up and considering that the list of herbicide-resistant weeds is growing, and many have become resistant to more than one mode of action, it’s natural to want to blame herbicide resistance. Dave Bilyea, a weed technician with the University of Guelph’s Ridgetown Campus, wants producers to think again.

“Weeds are successful, but it’s not just because they are herbicide resistant,” says Bilyea, who was involved in research to look at every weed on the most recent list of herbicide-resistant weed species in Ontario. “They all have particular mechanisms that enable them to spread efficiently.”

How weeds spread
Weeds typically have exceptional root systems that dig deep and are resilient when it comes to damage from tilling, weeding and other termination processes. They can also produce thousands of seeds per plant. For example, lamb’s-quarters – which was found to be one of the worst weeds in Ontario, according to an online survey of farmers conducted in 2016 – can produce up to 75,000 seeds per plant.

While the biggest culprit for spreading weeds is the wind, there are other common ways weeds may introduce themselves to a new location. These include being transferred via waterways as well as by wildlife, livestock and even farm equipment.

“Just because weeds are herbicide resistant doesn’t mean that’s the only reason weeds are still present,” Bilyea says. “There are other factors that allow these weeds to spread.”

Birds of a feather
Some of them make sense, such as waterfowl spreading Palmer amaranth – a member of the waterhemp and pigweed families that has been causing grief in the United States because it is resistant to Groups 2, 3, 5, 9 and 14 herbicides. It grows to 10 feet in height and produces up to 500,000 pepper grain-sized seeds per plant.

“Palmer amaranth is a desert weed that saw a lot of spread inadvertently by humans,” Bilyea says, explaining the first infestation was from
cotton fed to cattle that spread it. “Now it is one of the worst weeds for all agronomic crops in the U.S.”

And when farmers in Missouri discovered it in their fields after ducks and geese had wintered there, weed scientists at the University of Missouri were approached to look into it. They conducted a two-phase project, first to determine what weed species the waterfowl were consuming and then to see how long it took the seeds to travel through the birds’ digestive systems.

“It’s theoretical at this point, but because they are migratory, these birds can move the seed further,” Bilyea says.

The research supports the theory, finding that waterfowl consume a variety of weed seed throughout Missouri, with ducks consuming a larger variety than snow geese. While the majority of seed recovery occurred between four and 16 hours, five weed species, including Palmer amaranth, were recovered 36 to 48 hours after consumption.

As a result, the waterfowl have the potential to spread Palmer amaranth from states bordering Ontario into the province.

Dave Bilyea is working to determine how weeds like Canada fleabane spread from field to field.

“It is not clear what they are doing with them, but they seem to prefer giant ragweed seed,” Bilyea says. “They are not eating them but burrowing down and planting them so there will always be populations nearby because of this.”

By tying thread to the ragweed seeds to see how far down the worms took them, researchers found seeds were buried between 0.5 and 22 centimetres deep. Most were buried in the upper 10 centimetres of the soil, the depth limit from which giant ragweed seedlings can emerge. Below that and the seeds tend to remain dormant. As for quantity, the researchers determined that in one square foot of soil, three to four earthworms could bury 500 ragweed seeds.

“It’s why ragweed is so prevalent,” Bilyea says, explaining greater than 60 per cent of the seeds may emerge from the worm burrows.

That can pose a problem considering giant ragweed, which is now resistant to Groups 2 and 9 herbicides, can grow as high as 13 feet and produce thousands of seeds per plant.

Be aware
Bilyea says he does not want to alarm farmers about these threats, but he does believe they should be aware that weed seeds can be spread in nonconventional ways.

“We have waterhemp here in Ontario and we are trying to manage it as best we can,” he says. “Palmer amaranth, to this point, no one has found in Ontario.”

He encourages farmers to look around, do weed identification and if they see something different, report it.

“It’s all about scouting,” Bilyea says. “Be diligent in scouting, and not just in fields, but also around small ponds and in provincial parks where populations can start.

“It’s important to have people looking,” he adds. “If we can find small populations, we can do something about them. Scouting is important.”


Related
Weeds to watch: Preparing for the arrival of Palmer amaranth
Syngenta receives registration for new herbicide for Roundup Ready 2 Xtend soybeans
What can we learn from the loss of the world’s greatest herbicide?
Dicamba for control in glyphosate- and dicamba-resistant soybean