Features Herbicides Seed & Chemical
What can we learn from the loss of the world’s greatest herbicide?

For me, the world’s greatest herbicide was – and I say that in the past tense, was – glyphosate. It’s unfortunate but in my geography it is a herbicide of the past on many driver weeds. For me Palmer amaranth is a driver weed. For you that may be kochia. That may be wild oat. That could be green foxtail. 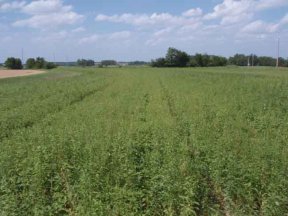 Palmer amaranth three years after the introduction of one patch of seeds.

Glyphosate resistance has caused an increase of about $40 to $50 per acre in our weed control systems. Those herbicide costs are directly driven as a result of the resistance issues that we’re dealing with: Reduced harvest efficiency. Complete crop loss. Loss of the family farm. It’s compromised conservation tillage for us.

Glyphosate-resistant Palmer amaranth is spreading because almost all of our acreage was planted to Roundup Ready technology and sprayed with one herbicide, glyphosate. We’ve got to bring more diversity into these production systems.

The resistance treadmill. There’s nothing novel about this. Back in the mid to late ’80s we adopted ALS herbicides throughout the U.S. but weeds developed resistance. In the mid ’90s glyphosate came along. Glyphosate became the solution to ALS resistance.

Once we had glyphosate resistance we took the PPO chemistry and applied it pre-emergence. We also applied it post-emergence and that allowed us to have continued planting of Roundup Ready crops. In 2015, we found PPO-resistant Palmer amaranth. We now have found it in five states in the southern U.S. It appears to be spreading rather quickly. Glyphosate resistance is the reason we have PPO resistance today. Stacked resistance or multiple resistance – it’s a game-changer.

How do we move forward? I have 12 BMPs or best measurement practices but will only talk about six ways of moving forward today.