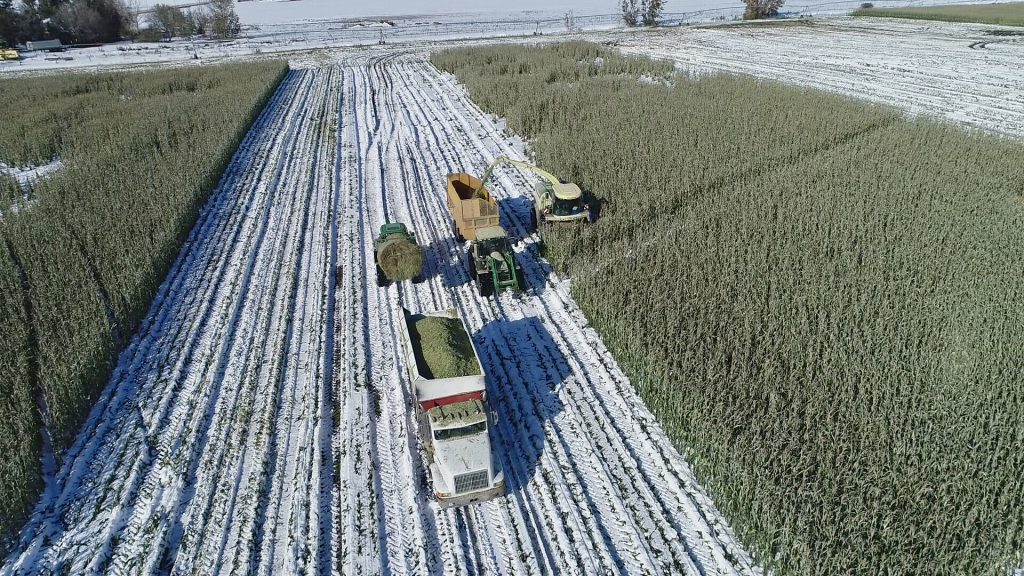 Struggling through the 2019 corn harvest. Photo courtesy of Adrian Moens.

The challenges faced by grain producers in the Prairies from the 2019 harvest continue – this time, with grain drying costs. As the majority of the grain harvest needs to be dried to keep it from rotting thanks to the heavy rains late in the season, natural gas bills and carbon tax fees have soared.

While farmers can file for carbon tax exemption certificates for fuel used while farming or for transportation around the farm, fuel used for other purposes – like grain drying – is not currently exempt.

A range of government officials at the provincial and federal levels have requested that the Trudeau government consider extending the carbon tax exemption to the natural gas and propane used in grain-drying machines. The Trudeau government is considering using existing extreme-weather programs to provide financial assistance to affected farmers, but have yet to make any commitments.

When Agriculture Minister Marie-Claude Bibeau was asked about the issue several weeks ago, she said she needed to see more evidence of the carbon tax affecting farmers before acting.

“I don’t want to go on feelings, but I’m more than willing to advocate once I have the case in front of me,” Bibeau said, according to Western Producer. “I just need more evidence to see the impact it’s had on a farm.”

Keystone Agricultural Producers (KAP) announced that Manitoba producers will have paid almost $1.7 million in carbon tax related to the cost of drying grain on their corn alone by the time this harvest season ends. Initial data shows that the average producer paid $3.69 per acre in carbon tax on grain drying (primarily corn).

Dennis Thiessen, president of the Manitoba Corn Growers Association, has said that the carbon tax reduces profitability and competitiveness of Canadian grain on the world market, as other countries that don’t pay a carbon tax can flood Canadian markets with cheaper grain.

KAP has requested that producers share their fuel bills for grain drying as they collect information to demonstrate the plight of producers with data-driven evidence as they work with the Manitoba government to present a unified case to the federal government.