February 10, 2020
By Agriculture and Agri-Food Canada

There’s nothing like a little friendly competition to up your game. Agriculture and Agri-Food Canada (AAFC) and the Atlantic Grains Council (AGC) organized a competition for Prince Edward Island grain farmers this past summer to see who could achieve the highest crop yields.

On Jan. 10th, farmers joined representatives from AAFC and AGC for the Yield Enhancement Network (YEN) annual conference in Charlottetown to find out who would take home the top honours for highest total yield and highest percentage of potential yield.

Sixteen P.E.I. farmers participated in the crop yield competition. The winners for the 2019 growing season were: 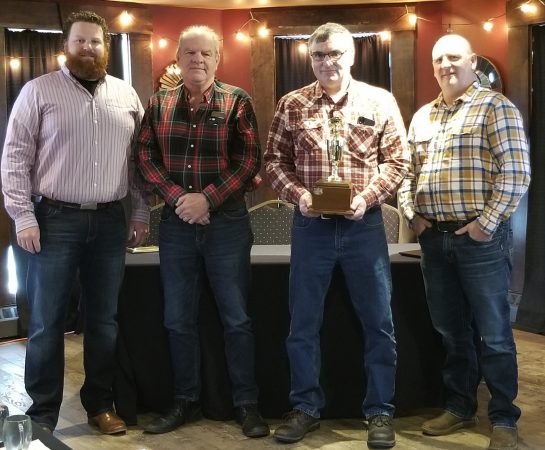 The year-end conference and awards ceremony were part of Canada’s first YEN – a new collaboration launched in March 2019 by AAFC agronomist Aaron Mills, AGC, P.E.I. grain farmers and in consultation with the British Agricultural Development and Advisory Service (ADAS).

The network model was developed six years ago by ADAS to help researchers and farmers in the United Kingdom work more closely together and share their ideas and experiences in pursuit of higher crop yields for all participants. The new Network on P.E.I. is a three-year collaboration jointly funded by AAFC and AGC.

The P.E.I. award winners were delighted to be recognized as the network’s top grain growers. Each winning farmer shared their own best practices during a roundtable session with the other participating farmers. Anthony Nabuurs, a Montague farmer and award winner, praised the newly formed P.E.I. network as a springboard for Island grain farmers to achieve higher yields by working together.

“We learn best by talking to our peers, comparing notes and reading the reports from researchers,” Nabuurs said. “I’ve got some new things to put into practice next year. When you get two or three years of good results from a new concept, then you know you’ve got something.”

The network also enables researchers to develop on-farm innovation and helps farmers understand the factors that contribute to their overall yield. AAFC supports this work by collecting samples from the farmers, analyzing data and sharing the findings. British researchers from ADAS enter the farmers’ data into their growth models to determine the yield potential of each field under ideal conditions. The data gathered through the network is a first-of-its-kind for grain farmers on P.E.I. The data and associated analysis are valuable because they help scientists advance their research and farmers gain insight about how to improve their yields.

“We generated 10 to 12-page reports for each of the farmers with recommendations to implement in the 2020 growing season,” Mills says. “We’re looking forward to seeing how these [reports] translate into more success for farmers this coming summer.”

Mark Stubbs, Britain’s network’s top yield-winning farmer (6.52 t/ac), travelled to P.E.I. as keynote speaker for the conference to discuss best practices from his farm in Louth, Lincolnshire, England. P.E.I. YEN participants were keenly interested in his on-farm innovations resulting in such high yield, as well as the impact the network has had on growers in Britain.