Features Agronomy Fertility and Nutrients
Understanding the effects of sunlight, temperature and precipitation

Crop growth and yield are strongly affected by sunlight, temperature and growing season precipitation. From a farmer’s perspective, temperature and water availability are the two most important environmental factors that affect crop production. 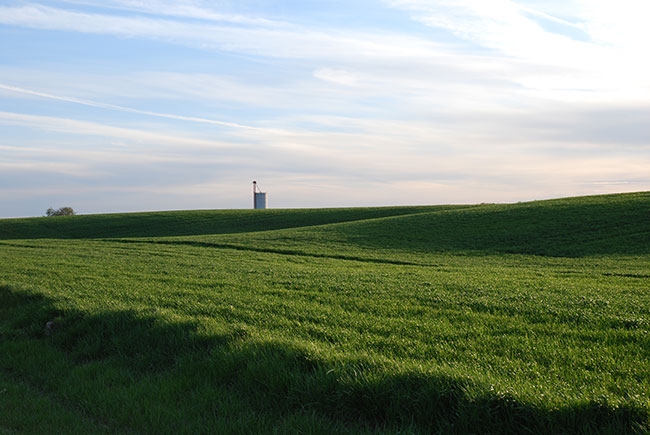 Sunlight Crop growth and yield are strongly affected by sunlight

The availability of water is often a limitation to crop production on the southern Prairies. In other regions, excess moisture limits successful production. Other environmental factors, such as cool spring soil temperatures, slow down seed germination and emergence.

In some years, late spring frost affects seedling growth or early fall frost affects crop yield and grain quality. But solar radiation is also a key factor in crop production. The more we understand the relationships between our crops and our climate, the better we can plan and design stronger cropping practices.

Agronomic factors such as weed competition, insect feeding or leaf diseases can reduce leaf surface area and interfere with sunlight capture by crops. In theory, as the amount of captured radiation energy increases, crop production will also increase. When plant leaves absorb the energy of the sun for photosynthesis, the temperature of the leaf surface increases. Plants respond by releasing water through the stomata to cool the leaf surface.

Plant leaves take up carbon dioxide from the atmosphere and water is taken up by plant roots. Sunlight provides the energy plants need to convert carbon dioxide and water into carbohydrates and oxygen. The carbohydrates produced by photosynthesis are used for vegetative and reproductive growth and to increase crop biomass. Because solar energy is needed for photosynthesis, it only occurs during daylight.

The amount of solar radiation reaching a crop is affected by the amount of water vapour in the atmosphere. Clouds reduce solar radiation by reflecting it back into outer space, preventing it from reaching crops. In the future, as the concentration of greenhouse gases increase in the atmosphere, there will be a gradual reduction in cloudiness, which will promote further global warming.

Farmers can increase the potential of their crops to capture solar radiation by seeding as early as is reasonable each spring. For example, wheat seeded on May 3 will have seven weeks where the days are getting longer, versus wheat seeded on May 30, when the days get longer for only three weeks before growing shorter again. Generally, seeding earlier can give crops a yield advantage.

Soil moisture and crop water use
The amount of water taken up and used by a crop is affected by a number of factors, including crop growth stages, crop rooting depths, availability of soil water, precipitation amounts during the growing season and environmental factors including the amount of solar radiation, humidity, temperature and wind.

ET is the combination of water evaporation from soil and plant surfaces and water used by plants for growth and transpiration. Transpiration refers to the water lost to the atmosphere through a plant’s stomata – pores located mostly on the undersides of plant leaves. Plants release water vapour through the stomata, cooling the leaf surface to minimize heat stress.

Crops use their root systems to extract water from the soil. The rate and amount of water taken up by a crop is affected by the soil water content, stage of plant growth and effective rooting depth. Figures 1 to 4 show examples of crop water use for wheat, barley, canola and pea, when soil moisture is not limiting.

For annual crops, a certain amount of moisture is needed to initiate germination and take the crop through the vegetative and reproductive growth stages to a point where seed can be produced. For wheat, barley and canola, at least 100 millimetres (mm) or four inches and often closer to 125 mm or five inches of water is needed to get a crop from germination to the reproductive growth stage. The amount of moisture needed varies, as crops do not need as much moisture for transpiration on a cool day as they do on a warm day.

When cereal crops are at the heading stage, water use is seven to eight mm per day under ideal conditions. This means peak water use is substantial from mid-June to late July or early August. If moisture is lacking, crops cannot keep up with water use and significant yield reduction can occur.

Once a crop shifts from vegetative to reproductive growth, water use remains high. Under optimum growth conditions, cereal crops after heading and canola at the flowering growth stage will continue to use seven to eight mm of water per day until seed filling. As grain filling nears completion, crop water use declines, dropping off rapidly as plants approach maturity.

When crops cannot take up sufficient water from soil to meet crop water use, a deficit occurs. To avoid dehydration, C3 crops close their stomata, leading to a decrease in photosynthetic activity. As the water deficit increases and photosynthesis decreases, crop yield potential also decreases. C3 plants are the most efficient at photosynthesis and are the most common, consisting of most temperate crops, wheat, beans, potatoes and trees.

Drought occurs when a severe lack of soil water and precipitation occurs, resulting in a drastic reduction in crop yield. Droughts are usually considered severe when crop yields are reduced by at least 50 per cent below long-term average yield. Severe drought usually occurs as a result of both higher than normal temperature and lower than normal precipitation.

Heat stress and water stress commonly occur in the southern Prairies, however they also occur periodically across all agricultural regions. They can occur separately or simultaneously. Water stressed plants do not have adequate soil moisture to meet transpiration needs, causing stomata to close, which, in turn, results in an increase in plant temperature.

The upper temperature for heat stress varies with crop type and growth stage development. For wheat, the typical optimum temperature range for photosynthesis is between 15 and 30 C. Heat stress increases when temperatures are between 30 and 40 C; above 40 C, the photosynthetic processes can permanently break down. High temperature can affect various growth stages. For example, yield of wheat is impacted when high temperatures occur five to 10 days before anthesis, when pollen is formed and viability can be seriously affected.

The more we understand about the relationships between our crops and our variable weather and climate, the better we can plan and design more sustainable cropping practices. We need to consider all agronomy disciplines, such as crop types that can be grown, and management of fertilizers, weeds, insects and diseases, which are also affected by variable weather factors. Then crop production practices can be gradually adapted to minimize the negative effects of weather extremes. In the future, with advances in crop breeding, improved agronomic practices and better long-term weather forecasts, crop production can be successful over a wider range of variable temperatures and water availabilities.