Alireza Navabi is amazed by the wide adaptability of wheat across the world. 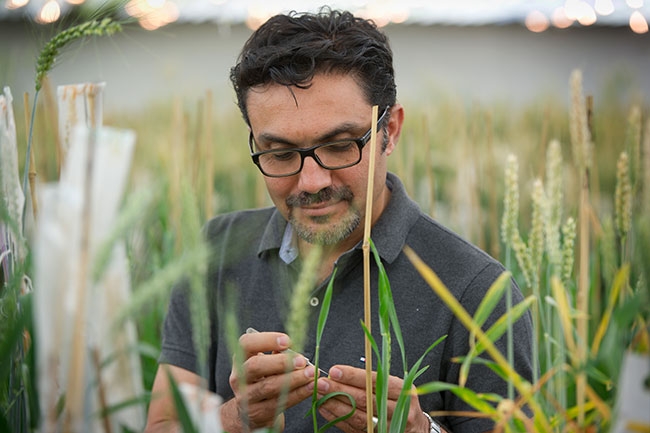 University of Guelph associate professor Alireza Navabi making crosses in wheat. Alireza Navabi is amazed by the wide adaptability of wheat across the world.

“At any time during the year, wheat crop is being harvested somewhere in the world. It is grown in every continent except the Antarctic,” he says. “Wheat has very wide adaptation.”

It makes sense, considering wheat was domesticated 12,000 years ago in the Fertile Crescent and has since expanded all around the world. This means people have been able to identify varieties of wheat that adapt to their environments no matter where they are.

Navabi is currently feeding his fascination with wheat’s wide adaptability at the University of Guelph, where he is an associate professor with the Grain Farmers of Ontario Professorship in Wheat Breeding. He, master’s student Alexander Whittal and post-doctoral researcher Mina Kaviani are mid-way through a three-year project focused on how different varieties of wheat adapt to environmental difficulties, particularly cold.

Funding for the project comes from the Ontario Ministry of Agriculture, Food and Rural Affairs-University of Guelph funding program, SeCan and the Grain Farmers of Ontario.

“Canada has so many environmental challenges, but a big one is cold weather,” Navabi says, explaining there are two mechanisms that help adaptation response of winter wheat to cold.

One is vernalization (Vrn), which accelerates flowering or gives a plant the ability to flower in response to exposure to cold temperature. A second is response to photoperiod (Ppd), which is the length of the day a plant receives light.

“Vernalization requirement is the difference between winter wheat and spring wheat,” Navabi says. “Winter wheat varieties do not flower unless exposed to cold temperature during the winter.

“We have wheat varieties that are Ppd sensitive and varieties that are Ppd insensitive,” he adds. “Photoperiod-sensitivity determines how wheat can adapt to different latitudes in the world, but also, for winter grown crop, is the mechanism that does not allow the initiation of flowering during short days in the fall.”

The research project, which began in 2015, is specifically focused on understanding how these two mechanisms interact to help wheat adapt to environments.

“As a breeder, I need to understand my germplasm,” says Navabi, who is leading the university’s current wheat breeding program that began in 2014. “One of the details I wanted to know was how they respond to different environments and, more specifically, to vernalization temperature and photoperiod.

“If we modify their need for vernalization or photoperiod by conventional breeding, we may be able to expand adaptation of wheat in Ontario and ultimately develop wheat varieties that can perform better in Ontario,” he adds. “Once we understand the adaptation mechanism, we can look at how we can improve it.”

Initial results
For the project, Whittal worked with 208 different varieties of wheat, characterizing them at the gene level by looking at DNA markers specific for the genes that control response to vernalization and photoperiod in wheat. Whittal also grew the 208 varieties in the field in multiple locations and then looked at how they performed agronomically and based on the number of days to flowering and to maturity.

There was little variation among the typical Canadian winter wheats when it came to genes that control response to Vrn, illustrating that almost all varieties of winter wheat available and bred in Canada have the same genetics for their Vrn requirement.

“However, there is variation for response to Ppd,” Navabi says. “Based on that, varieties of Canadian winter wheat appear to have different responses to Ppd. That can be significant when it comes to adaptation.”

“Such information can be very helpful in a breeding program if we can then determine the type of Vrn and Ppd combinations that we want to breed in for a specific environment,” Navabi adds. “What that means for the farmer is part of what we are doing now.”

Next steps
Kaviani is currently working with 24 different varieties of wheat with differing levels of Ppd sensitivity and Ppd non-sensitivity. These were planted at six different planting dates in the fall of 2016.

“Our hypothesis is if a farmer is planting early, they can benefit from Ppd sensitivity, but if they are planting late in the fall, they can probably benefit from planting Ppd insensitive varieties,” Navabi says. “We will then be able to make planting-date specific variety recommendations that if they plant early, they should plant this variety, but if [they] plant late, go with [an] alternate variety because it’s going to compensate for yield loss due to late planting.”

Though this specific research project concludes in April 2018, follow-up research is in the works.

“Based on what we learned, we applied for funding from the Natural Sciences and Engineering Research Council of Canada to build on this research so we can move on to understand winter hardiness of winter wheat, which is significantly affected by Vrn and Ppd,” Navabi says. “The focus will be on the winter hardiness of the materials we are working with.”

With that funding application accepted, University of Guelph master’s student Andy Chen joined the team to build on Whittal’s outcomes. Chen is now using drone technology to look at winter survival of various crops in the breeding program, including how different varieties of wheat tolerate winter and their survival rates. He will then relate those findings to the varieties’ response to Vrn and Ppd, which will assist the researchers in their goal to develop widely-adapted varieties now that they have an idea of what they need for a perfect Canadian winter wheat.