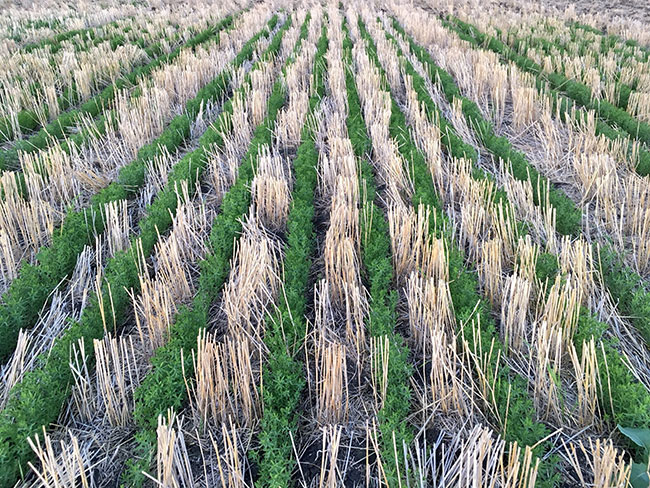 A project is underway in Western Canada to re-evaluate fertility requirements for flax under multiple environments and conditions. Photos courtesy of Chris Holzapfel.

Optimizing fertility can be a bit more challenging for such crops as flax, as responses can be variable depending on environmental conditions, moisture and other factors. Although not as consistently responsive as a crop like canola, optimizing nitrogen (N) and phosphorus (P) fertility requirements are important for maximizing yields and net returns. Researchers in Western Canada designed a project to re-evaluate fertility requirements for flax under a broad range of Western Canadian environments and using modern varieties and seeding equipment.

An extensive three-year study launched in 2016 included field trials at six locations in Saskatchewan (Indian Head, Melfort, Redvers, Scott, Swift Current and Yorkton), one in Alberta (Vegreville) and one in Manitoba (Brandon). At each location, various fertilizer treatments were compared, including four N rates of 13, 50, 100 and 150 kilograms of nitrogen per hectare (kg N/ha) of urea (46-0-0) and four P rates of 0, 20, 40 and 60 kg P2O5/ha of monoammonium phosphate (11-52-0). All of the plots were direct-seeded into cereal stubble and all fertilizer was sidebanded during seeding, except at the Vegreville site, which included mid-row banded fertilizer.

“The project field work finished with the fall 2018 harvest, however the final data analysis is still underway,” explains Chris Holzapfel, research manager at Indian Head Agricultural Research Foundation. “Growing conditions were variable across the three years of the project, with 2016 seeing above-average precipitation amounts and growing season temperatures at all sites. For 2017, conditions were much drier across most locations, although residual soil moisture from the previous year helped. Again in 2018, conditions were quite dry with some early season precipitation but little the rest of the growing season, resulting in variable responses and yields across the locations.”

Preliminary results from the first two years of the study indicate that in most cases the optimum N rates are approximately 80 to 100 kg N/acre. Holzapfel notes these results generally support previous research work with flax, although this study did find some responses to slightly higher rates of N than previously documented. “We don’t always see a consistent response and some of the results can be fairly year specific. However, if growers are in an area where average flax yields of 30 to 40 bu/acre are achievable, then N rates of 80 to 100 lbs/acre of total N would in most cases be close to optimum yields. Across all sites, yields did not increase with N rates beyond 100 kg N/ha. Soil testing is recommended.”

Phosphorus responses were less frequent and generally smaller, however yields were approximately 10 per cent higher on average with P fertilization. There were no negative impacts on emergence detected at any of the locations at the higher rates of side-banded P.

Some sites were more responsive than others. The lack of response to P fertilization at many sites may be explained by contributions of residual inorganic P and organic P mineralization in addition to the strong arbuscular mycorrhizal fungi relationships that flax can develop to assist with P uptake. Applying P at rates as part of a longer-term fertility strategy for maintaining or building P in cropping systems so it is not limiting is recommended.

“Flax is known to be fairy sensitive to seed placed fertilizer, so you don’t want to compromise establishment with higher P rates and never seedplace N,” Holzapfel adds.

“Flax is also quite susceptible to injury from high rates of N, so ensuring the best seed/fertilizer separation possible when sidebanding is important. In the study, as sidebanded N rates increased, plant populations significantly declined. However, making sure that seeding rates are sufficiently high can offset the bit of a loss at higher N rates. Flax is also reasonably flexible and can compensate for some emergence loss. Seeding rates of 45 to 50 pounds per acre are typically recommended, with a minimum plant population threshold of 300 plants per square metre or 30 plants per square foot, which keeps the crop competitive with weeds, won’t limit yield or impact maturity.”

Although flax is sensitive to environmental conditions, and responses can be variable from year to year, the study shows that optimal N rates and P fertilizer can increase yields for flax. “Sidebanded N rates of approximately 80 to 100 kg N/acre will help get close to optimal yields,” Holzapfel says. “It is important to plot out the economics as well to determine if the increase in yield is worth the higher N costs. Also using sufficiently high seeding rates to offset any emergence losses due to higher N rates is important, along with ensuring the best seed and fertilizer separation possible during seeding.” The final study results will be available in the spring of 2019.