There’s good news for flax producers: if your soil has reasonable nitrogen (N) fertility, you can save on fertilizer costs because pushing the N rate seldom results in increased yield. The bad news is that flax, unlike canola or cereals, is not very responsive to N application, so yields are hard to push higher. Researchers are trying to find the compromise where N application rates provide optimum flax yield. 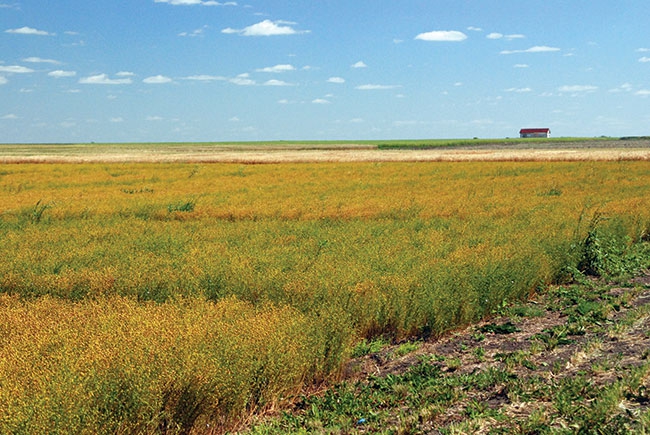 Flax requires relatively high N fertility. Generally, flax takes up 2.83 pounds of N per bushel of production, of which 2.23 pounds is removed with the seed at harvest. A 35 bushel per acre crop therefore requires approximately 100 pounds of N per acre sourced from both soil and fertilizer nutrients.

Flax is also very sensitive to seed-placed fertilizer. The Flax Council of Canada recommends N should not be placed directly with the seed, and some provincial guidelines also recommend that no phosphate fertilizer be seed-placed.

Holzapfel conducted several Agriculture Demonstration of Practices and Technologies (ADOPT) trials in 2013 and 2014, sponsored by the Saskatchewan Flax Development Commission and looking at multiple rates of N, phosphorus (P), potassium (K) and sulphur (S). Nitrogen rates were zero, 45 and 90 kilograms per hectare – or kg/ha – (kg/ha x 0.89 = pounds per acre, or lbs/ac). Residual soil fertility was relatively low at the sites. In these demonstration trials, the overall response to N fertilizer was highly significant, and in both years the 90 kg N rate resulted in higher flax yields than the 45 kg N rate. However, Holzapfel says that because only two rates were demonstrated, it is impossible to determine whether yields would have been maximized at an intermediate rate between 45 and 90 kg/ha, or if rates exceeding 90 kg N may have been beneficial.

In 2015, a further study was conducted at IHARF with three N rates of 45, 90 and 125 kg N per hectare, along with three P rates and two S rates. All fertilizer was sidebanded. Overall, there was a strong response to N fertilizer with yield increases of approximately 35 per cent relative to the control. Holzapfel says yields increased further when the rate was increased from 45 to 90 kg N, but only marginally, and yields were slightly lower with further increases to 135 kg N.

Flax trials were also conducted at the Northeast Agriculture Research Foundation (NARF) in Melfort, Sask., in 2014 and 2015 and at the East Central Research Foundation (ECRF) in Yorkton, Sask., in 2015. In those trials, N rates ranged from 34 to 168 kg N/ha. At Yorkton, the response was similar to that seen at Indian Head, with yields levelling off at approximately 67 kg N/ha. At Melfort, however, yields increased right up to the highest rates, showing gains of 55 to 60 per cent over the lowest rate of 34 kg/ha.

“The yield seemed to level off at around 45 to 90 kg N at most sites,” Holzapfel says.  “That isn’t surprising, as it seems to follow other research, but these are only single site trials, so we need to look at further research.”

Three older Agriculture and Agri-Food Canada (AAFC) multi-site research studies looked at flax response to N and provide additional guidelines, albeit with older flax varieties. The first was a three-year multi-site study led by research scientist Guy Lafond at Indian Head from 1999 to 2001. He compared fertilizer rates of 67, 100 and 133 per cent of the N recommended for a target yield of 32 bushels per acre, placed as a sideband at seeding. Yield increased when moving from 67 to 100 per cent of recommended N, but when N was pushed to 133 per cent of the recommended rate, no further yield increase was observed. However, at later seeding dates after mid-May, there was no yield response to increasing N rates past the 67 per cent rate.

Another three-year study by AAFC research scientist Sukhdev Malhi at Melfort from 2000 to 2002 also found flax responded moderately to N fertilizer application. The trials were conducted at Indian Head, Melfort, Scott and Swift Current, Sask., to determine the effect of N formulation (urea and anhydrous ammonia), placement (broadcast, sideband and mid-row band), timing, rate, and P placement (seven to 10 kg P/ha) on stand establishment, seed and straw yield, seed protein content, and N uptake in seed and straw under no-till conditions. N rates were zero, 40, 80 and 120 kg/ha at Melfort and Indian Head and zero, 30, 60 and 90 kg/ha at Swift Current and Scott. These rates represented none, 50, 100 and 150 per cent of recommended N.

Malhi reported flax yield often increased with the first increment of N fertilizer applied at 30 or 40 kg N per ha, and usually showed low to moderate increases thereafter, with only a few exceptions. He suggested broadcast urea can be less effective than side-banded urea, fall banded N can be inferior to spring banded N, and seed-placed P can reduce seed yield compared to side-banded P.