If flax gets off to a weak start, it seems to struggle all season long; it has a hard time competing with weeds, and maturity can be delayed,” says Chris Holzapfel, research manager for the Indian Head Agricultural Research Foundation (IHARF) in Saskatchewan. To find out which seeding practices give flax crops a better start and better yields, Holzapfel and his colleagues have been assessing the effects of different seeding rates, seeding dates, row spacings and seed treatments. 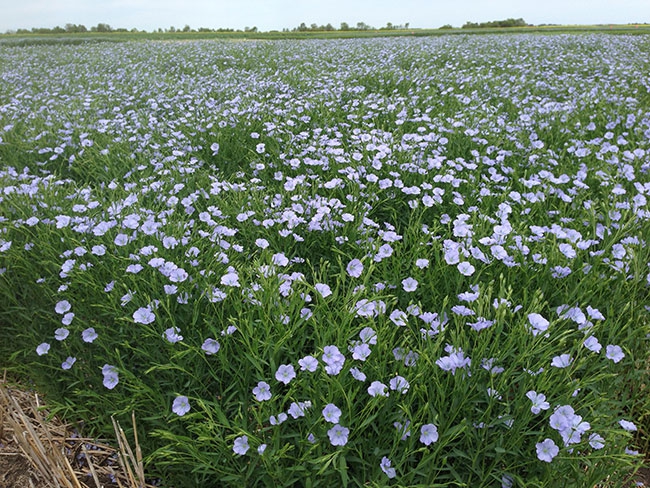 A series of trials in Saskatchewan compared different seeding practices to evaluate which options would give flax crops a better start and better yields. If flax gets off to a weak start

Seeding rate results
Their seeding date and rate trials took place at Indian Head from 2013 to 2016, at Melfort in 2014 and 2015, and at Yorkton in 2015. Stewart Brandt, research manager with the Northeast Agriculture Research Foundation (NARF) led the Melfort trials and Mike Hall, research manager with the East Central Research Foundation (ECRF), led the Yorkton trials.

For the 2013 to 2015 trials, higher seeding rates tended to result in earlier and more uniform maturity. However, the effect on yield was inconsistent and not statistically significant in most cases.

Holzapfel points to a couple of reasons why yield wasn’t more strongly related to seeding rate. “For flax, the minimum recommended plant population is about 300 plants per square metre. The seeding rate that it takes to achieve that population can vary depending on seeding equipment, soil conditions, overall planting practices, and seed characteristics like size and per cent germination. In our study, we very rarely fell below the 300 plants per square metre threshold.” Also, flax has some ability to compensate for low densities through increased branching, so even if the plant population is a little below the 300 plant threshold, that may not translate into a lower yield if the growing conditions are good.

Holzapfel explains, “In 2016, the combination of warm conditions, optimal placement of seed and fertilizer, adequate initial soil moisture and frequent precipitation all contributed to excellent emergence and seedling survival. And seeding equipment is a factor as well; our SeedMaster drill did an exceptionally nice job in the relatively dry spring of 2016.”

Yields in 2016 for the low and medium seeding rates were similar; however, yields were slightly but significantly lower for the high rate. Holzapfel thinks the very high plant populations at the high seeding rate combined with wet conditions late in the growing season led to high disease pressure and probably contributed to this yield reduction.

Overall, Holzapfel concludes, “Anywhere in that 45 to 55 pounds per acre rate is typically pretty good.” He adds, “It would be beneficial to start looking more closely at thousand kernel weight and actual flax seedling mortality, similar to what we’ve done with canola, in particular. But with flax being a little lower seed cost, it’s not something I have looked at so far and we do not have a really good understanding of the actual mortality in Saskatchewan flax fields.”

“I encourage growers to always go back and look at what they are actually achieving for plant populations,” Holzapfel says. “Your specific soil conditions, seeding equipment, seeding speed, seeding depth, fertilizer practices – many factors can influence plant populations. If you look at your specific practices and your seeding rate, and you do plant counts, then that will help guide decisions in the future.”

Some flexibility on seeding date
Seeding date had a variable effect on flax yields.

“We always encourage early planting, but to me it was quite a positive to see that, with the exception of 2016, flax is relatively insensitive to small delays in planting. So, although we would not specifically recommend later seeding, it is not necessarily a bad thing. You obviously can’t seed all your crops first, so if something has to go in a little bit later, then flax could be a fairly good candidate,” Holzapfel explains.

“I like planting flax early because it handles cool, early spring conditions quite well. For instance, we don’t see early season insect pest issues with flax. In canola, sometimes if it’s too slow a start with early planting, flea beetles become problematic after the seed treatment has worn off. In terms of spring frost tolerance, flax is similar to canola, but I have seen several cases of very small flax plants touched by light frost with virtually no impact. So flax is not overly frost sensitive, although you do have to be a little careful,” Holzapfel notes.

His general advice is to try to seed flax by mid-May because it’s a long-season crop. However, as long as the flax crop is at or near physiological maturity, a fall frost would not be an issue. He says, “Often if your seed is mostly mature, a hard frost is almost a good thing because it will help kill those green stems off and dry things down.” Also, he adds, flax weathers well, standing up late, so growers will often leave it until after harvesting crops like cereals and canola, which are more susceptible to yield and quality loss.

Averaged across the three years, flax yields were reduced by two per cent per inch as row spacing increased from 10 to 24 inches.

“As a general rule, yield potential is likely to be higher with narrower row spacing, but row spacing is a complex issue,” Holzapfel says. He explains that row spacing decisions depend on things like seeding equipment, other crops grown and residue management. In some situations, a slightly wider row spacing could make sense. “For instance, a little wider row spacing can really help in fields with heavier crop residue, so you can do a better job of seeding. It can increase overall efficiency of seeding, reduce the cost of seeding, including fuel costs, and reduce soil disturbance. On the flip side, wider row spacing can, particularly in the case of flax, lead to lower or more variable yields and reduce the ability of the crop to compete with weeds. Things like overall weed populations or the presence of herbicide-resistant weeds can have a major impact on potential results.”

Even though a 10-inch spacing would likely produce the highest yields, spacings of 12 to 14 or even 15 inches would generally produce reasonably good results. He says, “There might be advantages to a 15-inch spacing [in your farming system], so if that’s what you have for equipment, then I wouldn’t be afraid to grow flax. Just stay on top of your weed control and expect that you might see slightly lower yields compared to narrower spacing with all other factors being equal.”

The first trial took place at Indian Head (IHARF) and Melfort (NARF) in 2013 and involved Vitaflo. “At our two locations, we saw a significant increase in plant populations, so we had improved crop establishment. And at Indian Head we had a slight but not significant yield increase with the seed treatment,” Holzapfel says. That year had a very high yield potential for flax, but wet conditions early on may have increased the potential for seedling disease and higher mortality.

The second trial was at Indian Head in 2016 and involved Insure Pulse. “Again, we saw a significant increase in plant populations with the seed treatment. It didn’t result in a yield benefit, but that is not surprising, given that we had such high populations to begin with and that we had really good conditions for both emergence and early season growth,” he says.

Holzapfel notes seed treatments are often used as a way to help plants deal with early season stresses, like cool conditions or seedling diseases. “A seed treatment could be a good risk management tool to help ensure good crop establishment, particularly if you are seeding flax quite early in the season. If it’s a relatively inexpensive tool that could help the crop have a more vigourous, healthy start, then I think a seed treatment is worth considering.”

For the seeding date, rate and row spacing trials and the 2016 seed treatment trial, the sponsoring agency was the Saskatchewan Flax Development Commission and in most cases funding was from Saskatchewan’s Agricultural Demonstration of Practices and Technologies (ADOPT) initiative under Growing Forward 2. Many of the crop inputs were provided by Bayer CropScience, BASF, Syngenta, FMC and Crop Production Services.