Effects on establishment, competitiveness, maturity and yield in Saskatchewan. 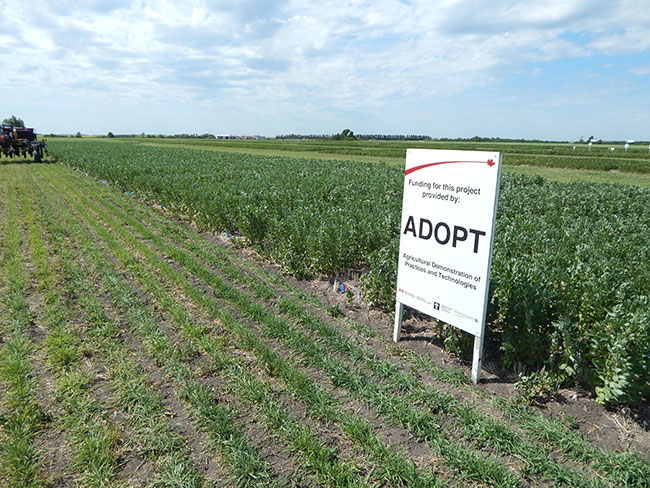 Fababeans can be a very good rotational crop option, particularly for growers in cooler, wetter regions in Saskatchewan and potentially other areas with adequate moisture availability. Researchers in Western Canada have several projects underway to build on the limited available agronomic knowledge and information for improving fababean production.

In 2018, researchers in Indian Head, Sask., established a field trial to assess fababean response, establishment and competitiveness in the thin-Black soil zone. “Our objective for this project was to evaluate row-spacing effects on fababeans and potential interactions with varying seeding rates,” says Chris Holzapfel, research manager with the Indian Head Agricultural Research Foundation (IHARF). “Row spacing and seeding rates have the potential to impact the crop’s ability to compete with weeds and yield, as well as maturity. We also wanted to demonstrate optimal seeding rates and the effects on seedling establishment and competitiveness in an area outside what is considered the more traditional fababean growing areas.”

“The 2018 growing season was a bit drier year, and yields overall were fairly low at around 40 bushels per acre [bu/ac],” Holzapfel notes. “Overall, we did not detect any significant interactions between row spacing and seeding rate. However, we did see an increase in plant density with seed rate, but the effect of row spacing was very subtle, with slightly higher plant populations measured at the narrowest row spacing. Although more research is required, it may be that narrower rows provide faster canopy closure, better weed competition and moisture conservation. We also saw a slight increase in late-season weed pressure at the lowest seeding rate, but no row-spacing effect. Across the treatments, weeds were well controlled with pre-emergent and in-crop herbicides.” 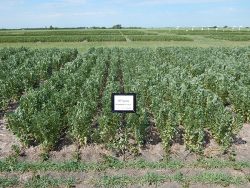 Fababean trial with an intermediate seeding rate of 45 seeds/m2 and a 16-inch row spacing July 2019 at IHARF. 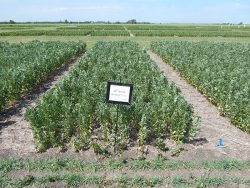 Fababean trial with an intermediate seeding rate of 45 seeds per square metre and a 10-inch row spacing, July 2019 at IHARF.

Although crop maturity was not significantly affected by row spacing, maturity did decrease linearly with increasing seed rate. The crop was straight cut, and Holzapfel notes that since the pods on fababeans tend to start higher up on the plant, he has not rolled the fields at seeding for several years, compared to other pulse crops such as lentils, peas and dry beans that are typically rolled every year after seeding. Grain yields were below average overall but similar across row-spacing treatments. Numerically, the highest yields were measured at 41 cm, or 16 in, the highest row spacing.

With the seed-rate treatments, the results showed a very slight yield increase as seed rates increased, with a total of a two bu/ac difference between the lowest seeding rate of 25 seeds/m2 and the highest seeding rate of 65 seeds/m2. In another recent three-year project, which evaluated a wide range of seeding rates over three growing seasons (2015-17) at multiple Agri-ARM sites in Saskatchewan, results varied with environmental conditions and fababean types. The results over the three year-study showed that generally the most consistent yields were achieved at seeding rates of 44 to 55 seeds/m2.

“Our results also showed that seed size from the harvested grain samples was not affected by row spacing, but inversely related to seeding rate, with the largest seeds observed at 25 seeds/m2,” adds Holzapfel. “A recent PAMI survey report, along with Manitoba variety evaluation trials, showed that fababean seed weight can range from 335 to 789 grams per 1,000 seeds, which results in a wide seeding-rate range. Seeding smaller seed size varieties can reduce some of the potential challenges with seeding equipment, particularly the potential of plugging at various points in a seeder, including the metering system, distribution system, blockage sensors and soil openers. However, some of the more seasoned growers prefer to grow the higher value large-seeded types and have developed seeding strategies with a reasonable amount of success.”

“Overall, our field trial results were reasonably consistent with some of the past work that has been done,” Holzapfel explains. “Across all treatments, effects were fairly small, although lower seeding rates were more detrimental with respect to competition with weeds than wider row spacing. The field trial results demonstrated that fababeans performed similarly across the full range of row-spacing treatments evaluated, but benefited from higher-than-expected seed rates under drought conditions. Although we only had funding for one year, we believe it would be beneficial to repeat this work under more typical, higher moisture, yielding conditions that would help us develop and validate more robust fababean row-spacing recommendations.”