Is there an interaction between seeding rate of pea and lentil, disease incidence, and fungicide effectiveness? This question was the driving force behind an Agricultural Demonstration of Practices and Technologies (ADOPT) Program project. 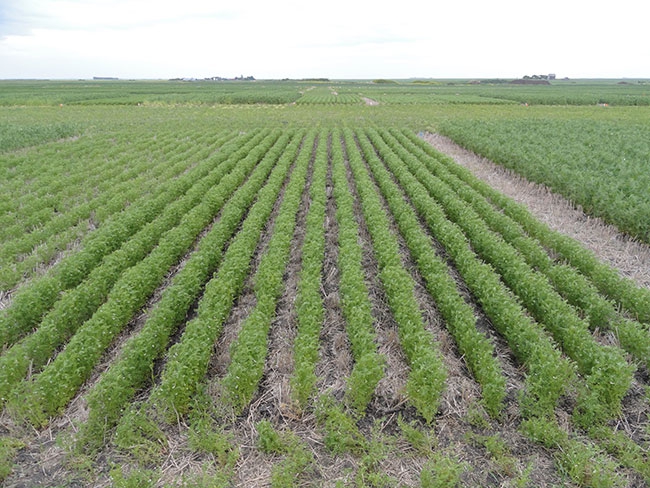 Diseases like white mould in lentil and Mycosphaerella blight in field pea are frequently associated with reduced yield and quality in Saskatchewan. Researcher Chris Holzapfel at the Indian Head Agricultural Research Foundation (IHARF) in Indian Head, Sask., says increased seeding rates in peas and lentils have been promoted as a way to increase yield and decrease weed competition, but dense crop canopies can potentially increase disease incidence and severity.

The ADOPT project investigated fungicide application and seeding rate effects on disease levels and yield in both pea and lentil. It ran at four locations across Saskatchewan in 2013: at the Western Applied Research Corporation in Scott, the Wheatland Conservation Area in Swift Current, the Conservation Learning Centre in Prince Albert, and IHARF. Holzapfel also ran the trial at IHARF in 2014.

ADOPT is supported under the Canada-Saskatchewan Growing Forward bilateral agreement.

While Holzapfel ran trials in both 2013 and 2014, growing conditions at Indian Head were very wet in the second year, resulting in lower than average yields.

“I would take our 2014 results with a grain of salt, as that year was pretty much a crop failure for pea and lentil, in my opinion,” Holzapfel says. As a result, only the four site years from 2013 are discussed here.

In 2013, seeding occurred in mid- to late May at all sites. The project used CDC Maxim for the lentil variety and Centennial for the pea variety. Fertilizer was applied according to soil test recommendations for both pea and lentil. Herbicides were applied as required according to the label.

As expected, plant density increased with higher seeding rates. Plant densities at the medium and high seeding rates were above the recommended target plant populations (75 to 85 plants per square metre, or plants/m2, for pea and 130 for lentil) in Swift Current and Indian Head. However, plant density of pea and lentil were below the optimum at the low and medium seeding rates in Scott. Despite the lower plant density in Scott, satisfactory weed control was achieved, and so weed competition would not have limited yield potential in these treatments.

The researchers reported applying a fungicide increased yields by nine to 21 per cent at all sites, which, on average, was enough to recover the additional cost of the fungicide. Targeting an optimum plant density by using seeding rates of 100 seeds/m2 for peas and 260 seeds/m2 for lentil resulted in higher yields compared to the lower seeding rates. Improvements in seed yield beyond these “medium” seeding rates were not consistent.

The researchers recommend targeting plant populations using provincial guidelines (75 to 85 plants/m2 for pea and 130 plants/m2 for lentil) and protecting a crop with high yield potential using a fungicide to maintain yield and improve net return.

“However, scouting for disease remains critical since applying a fungicide, while frequently beneficial, will not necessarily provide a return on investment when disease pressure is low or other factors are more limiting to yield,” Holzapfel says.